The previous day proved to be long and challenging especially for riders not used to riding on wet, round, marble-like gravel in the dark - so almost everyone. We had a late-night meal at our hotel in Cerro Sombrero and went to sleep. In the morning I found that this was to be an easy day, we would travel to a sea-port and take a ferry to Punta Arenas. One of the Moto Discovery guys mentioned another border crossing but said "just kidding" before he was lambasted with sighs and groans. Our fearless guide Roberto had a very challenging ride in the rain the previous night after being turned back by the Chilean customs to have a small piece of paper rubber-stamped. Where we took the gravel roads, Roberto stayed on the pavement with the wise thought that at least he would be able to see the yellow line on the wet dark roads. A few hours sleep is all that was required for all to recharge and we set out in the morning.

I have to admit, I was pretty tired of having my ass strapped to the seat of this little bike and I was happy to know that 120KM was all we had to endure on this day. I also have to admit that I was in a bad mood and was really just thinking about how I would rather be at home. I think these feelings are normal for anyone and they did pass before too long. The bike ride, while only 2 hours long from Cerro Sombrero to Provenir on the Strait of Magellan seemed much longer than it was, but it was pretty in a typical Patagonia way.

Our route for the day. If the map does not show for you, click here. 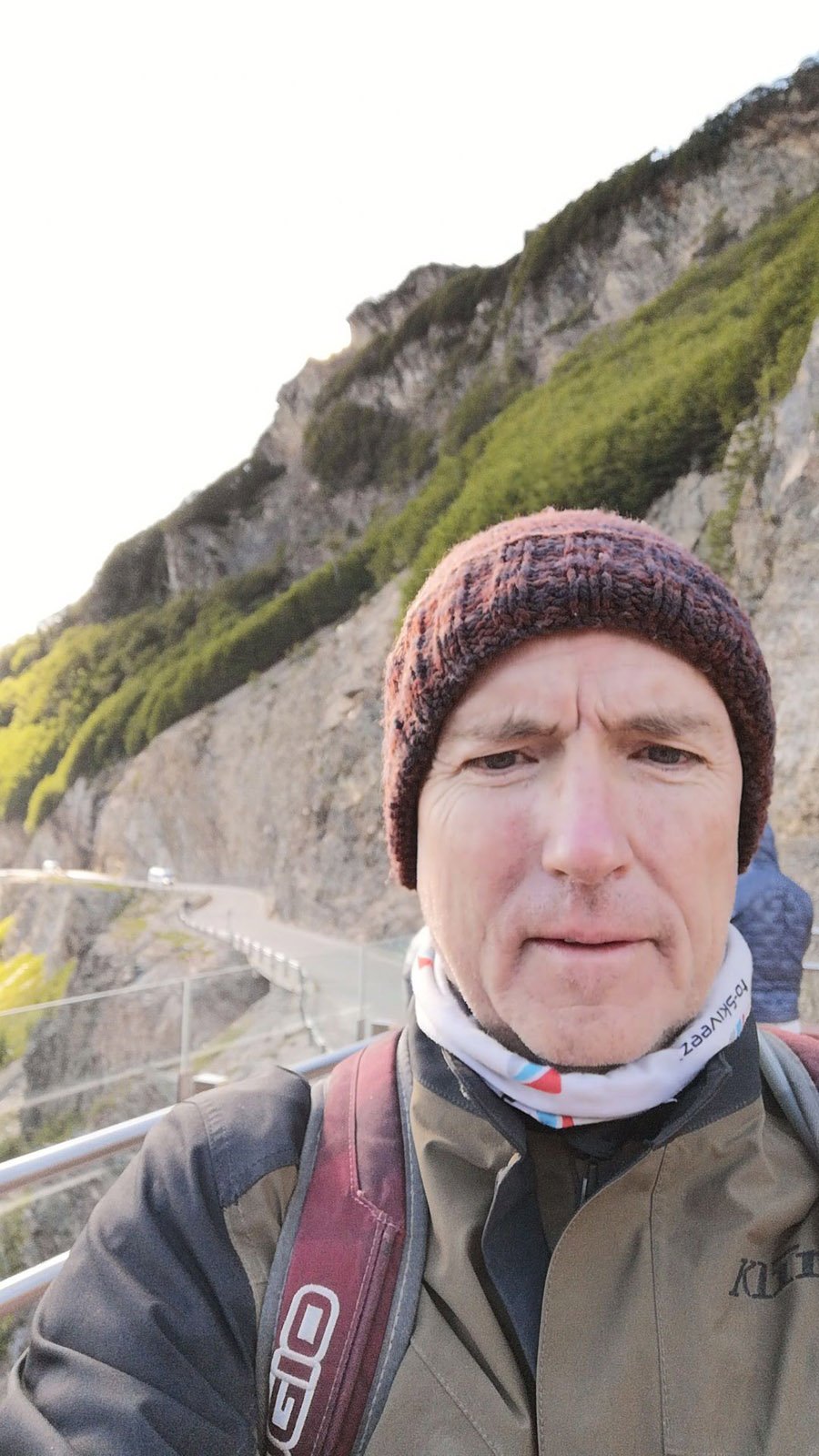 The trip from Cerro Sombrero to Porvenir was only 2 hours or so and for a good piece of it we were riding alongside the west coast of Tierra del Fuego. 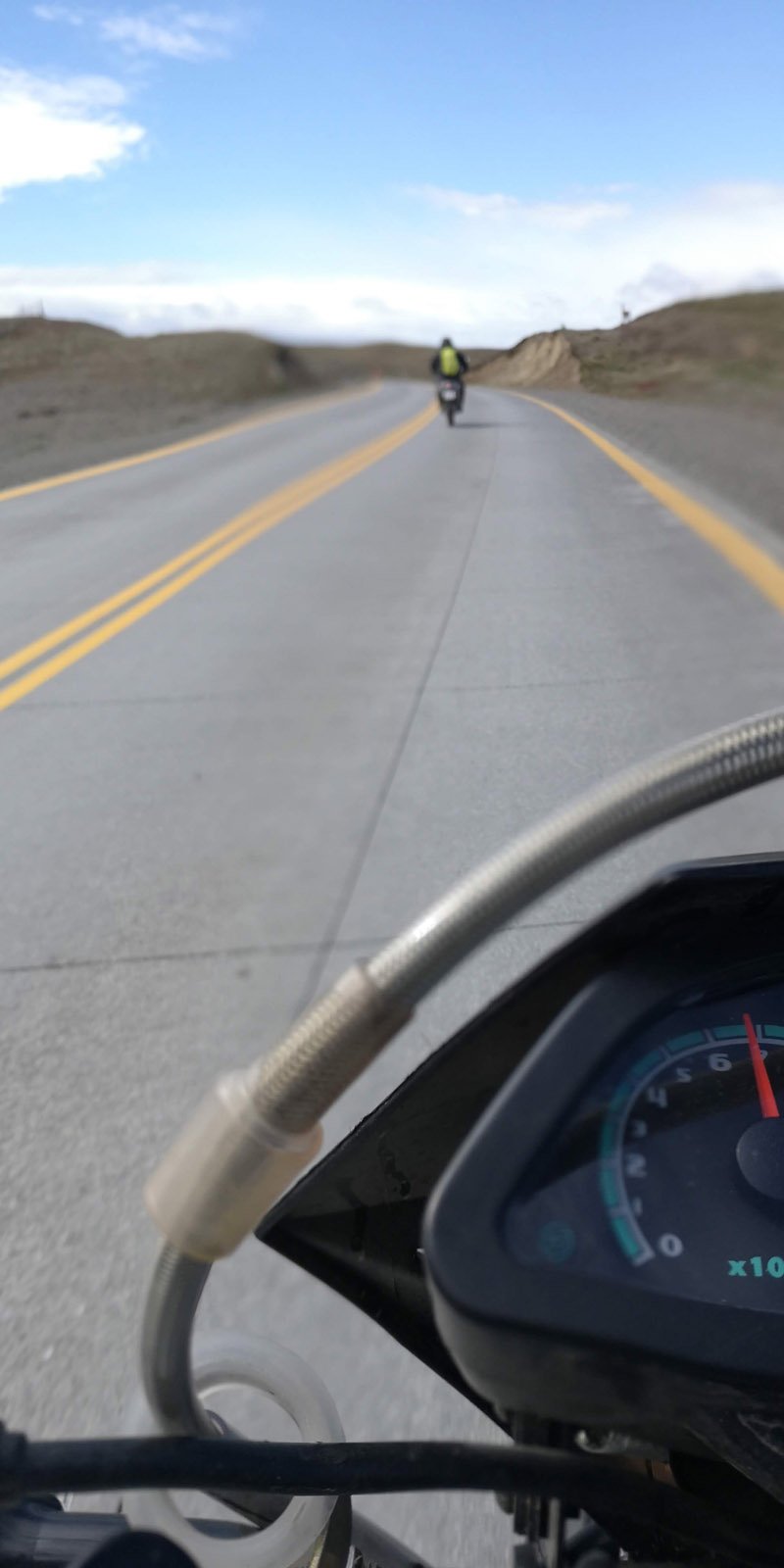 Another handlebar photo. The camera seemed to focus on the fact that I was running at 6800 RPM in top gear instead of focusing on the guanaco that was standing majestically on the top of a hill watching us ride by. 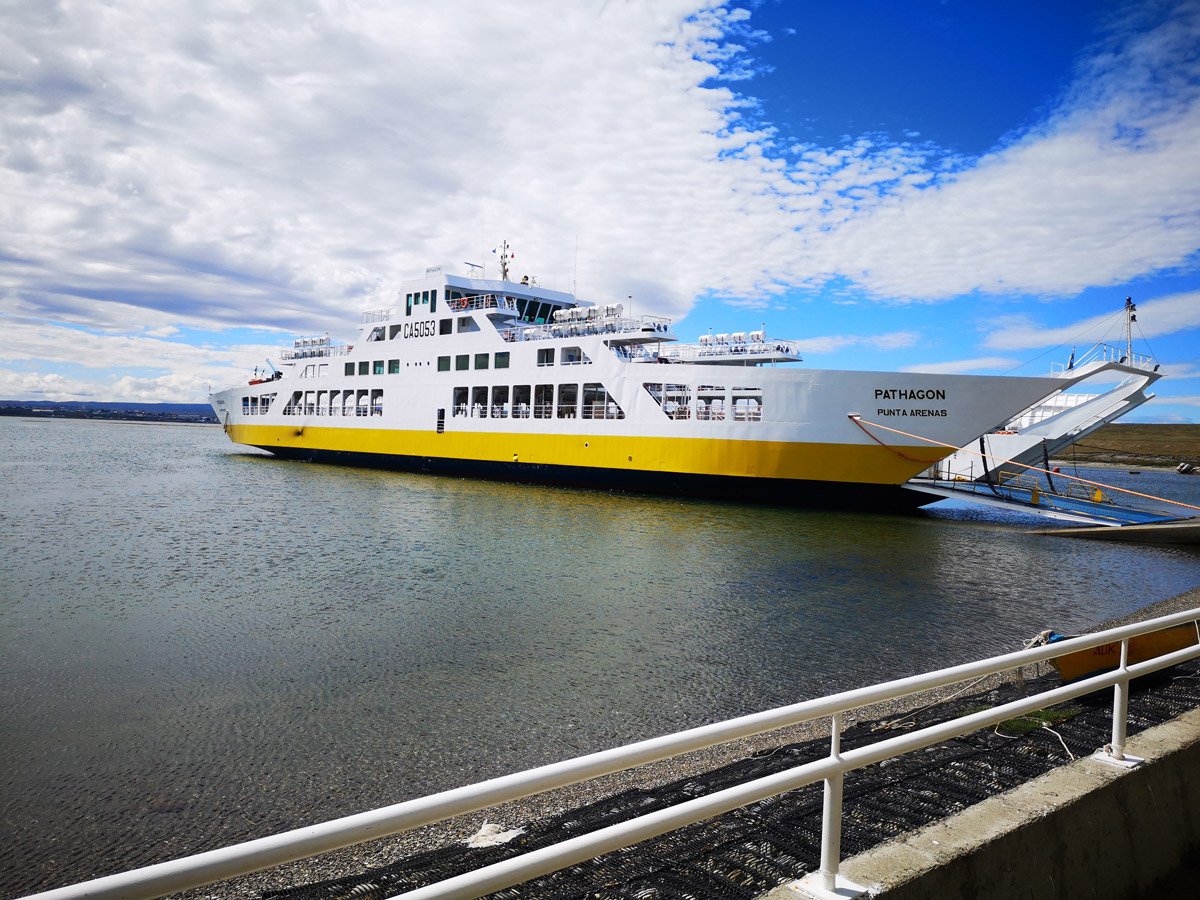 The ferry that will take us across the Strait of Magellan from Porvenir which is the capital city of the Chilean region of Tierra del Fuego, to Punta Arenas which is the largest city in Chilean Patagonia. 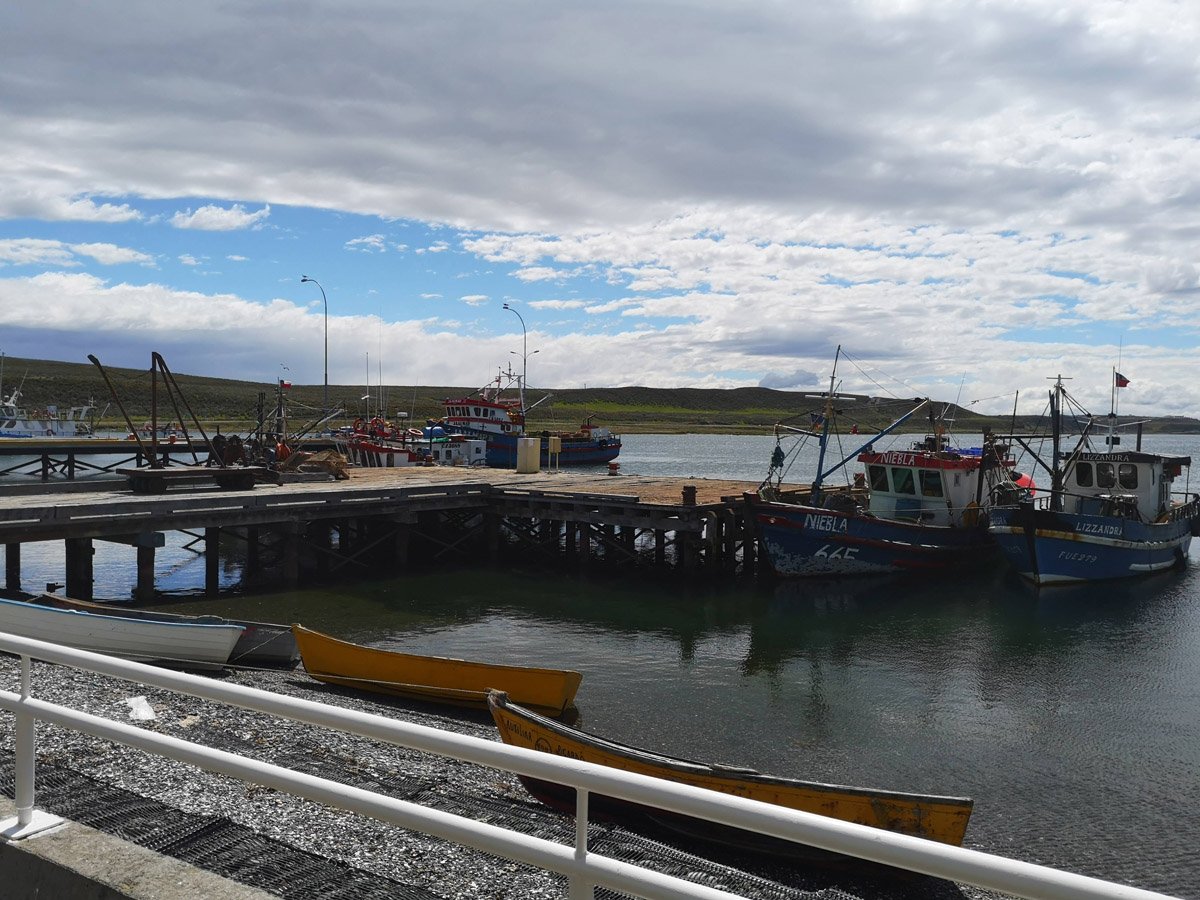 Some fishing boats at Porvenir harbour 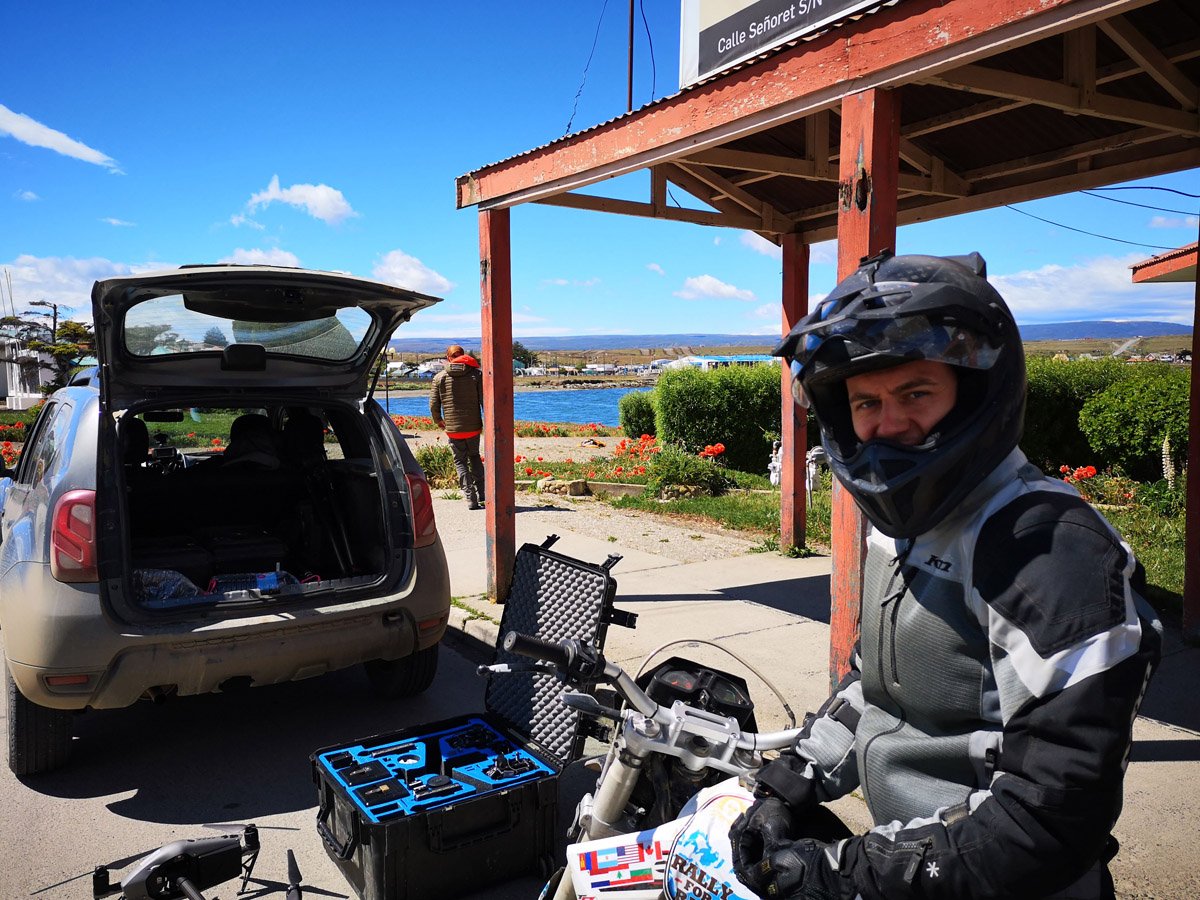 Orlin in Porvenir helping the media team with more footage of the great scenery heading up to the ferry terminal. 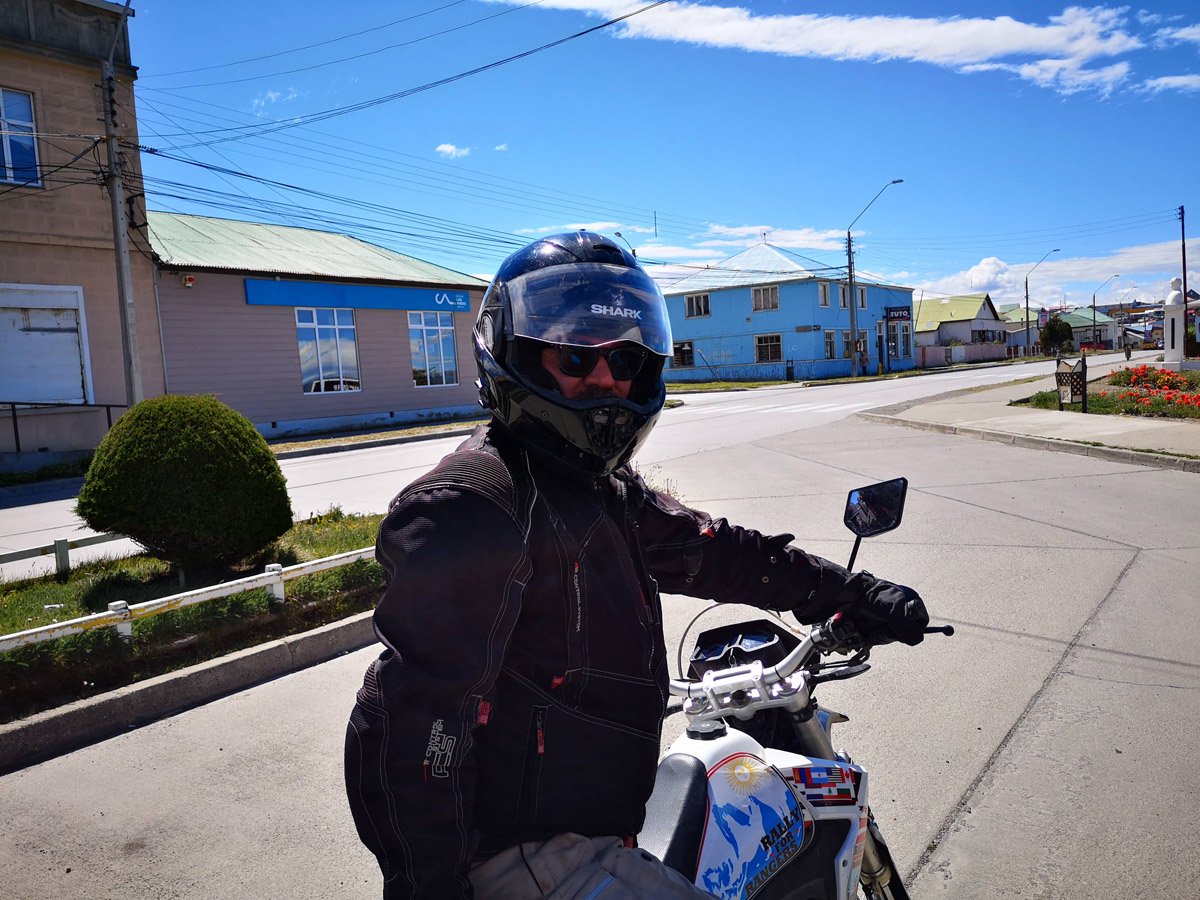 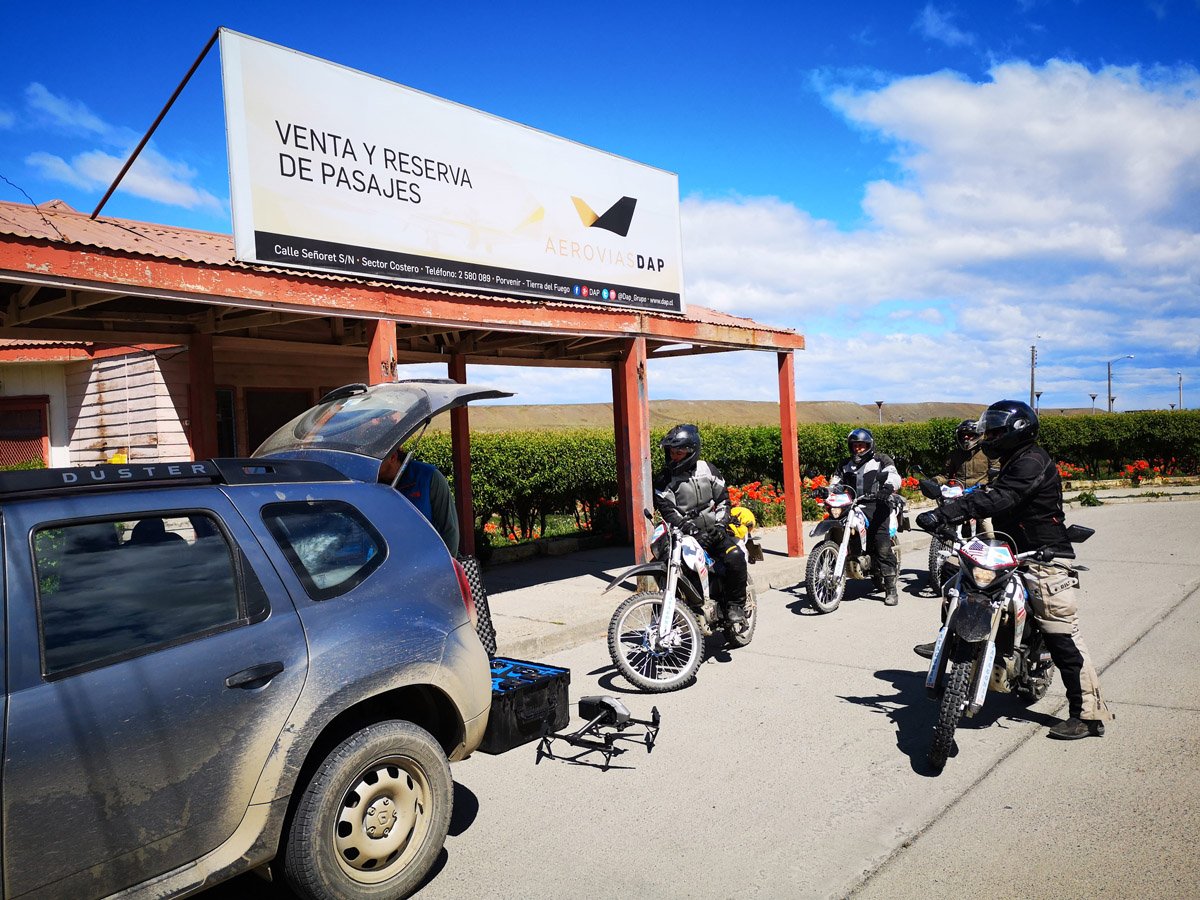 Parked in front of a travel agency while Dylan and Aha prepare the drone for another windy flight. 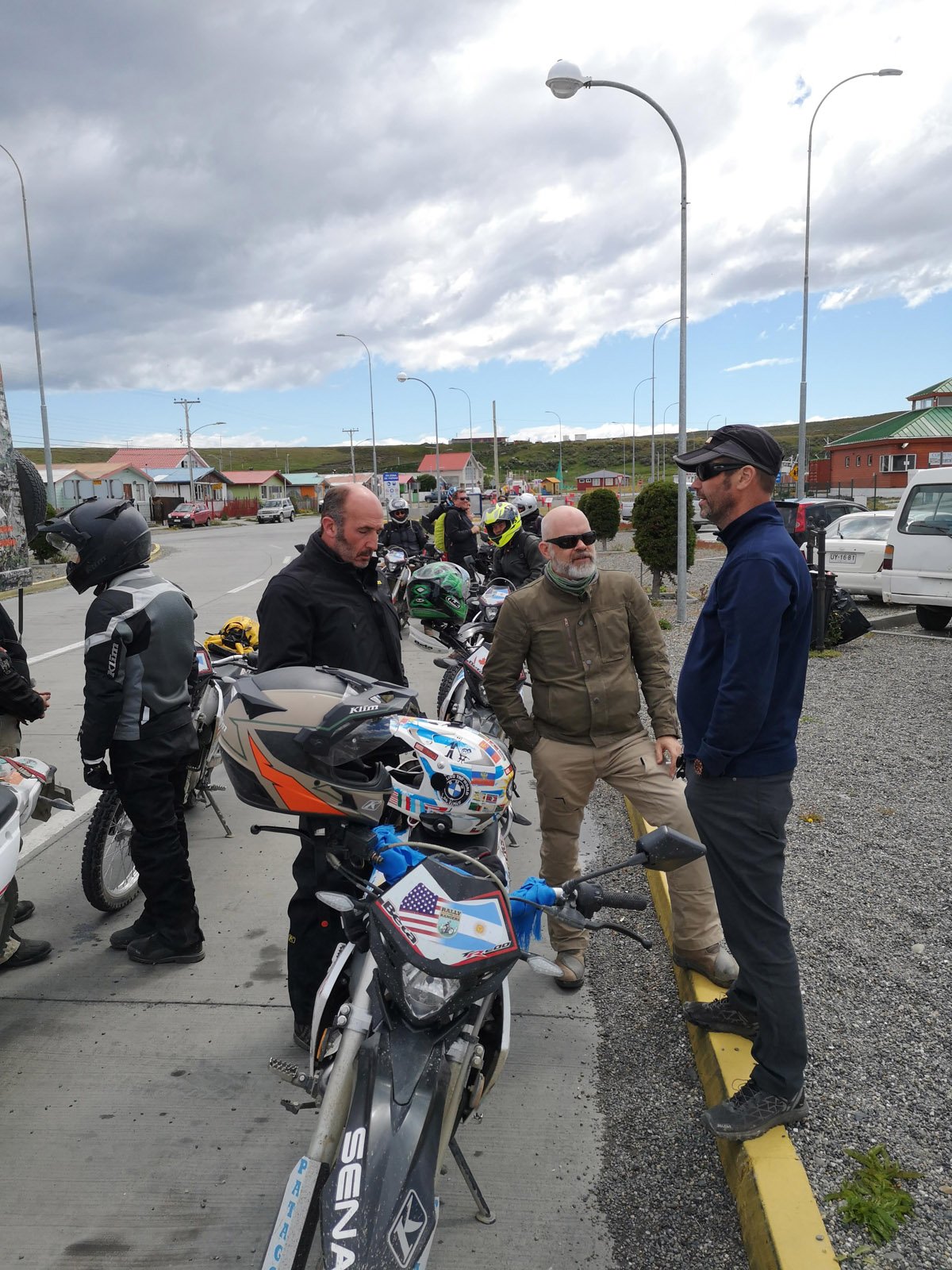 At the ferry terminal waiting for departure time. Roberto, Tom and Jeff contemplating the day. 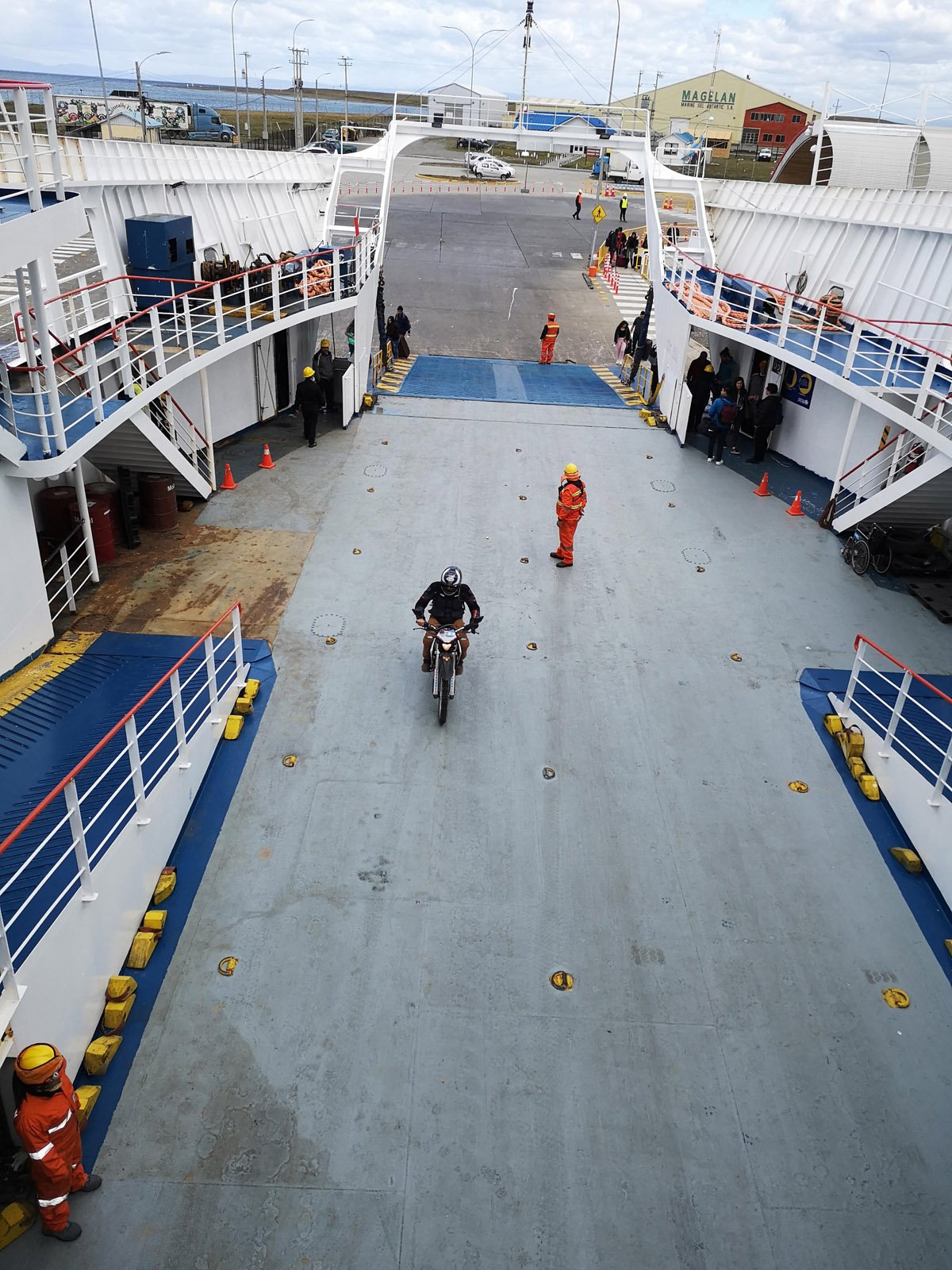 Mike Kennan bording the ferry. Even though we are going from one city in Chile to another city in Chile, we needed our passports handy. 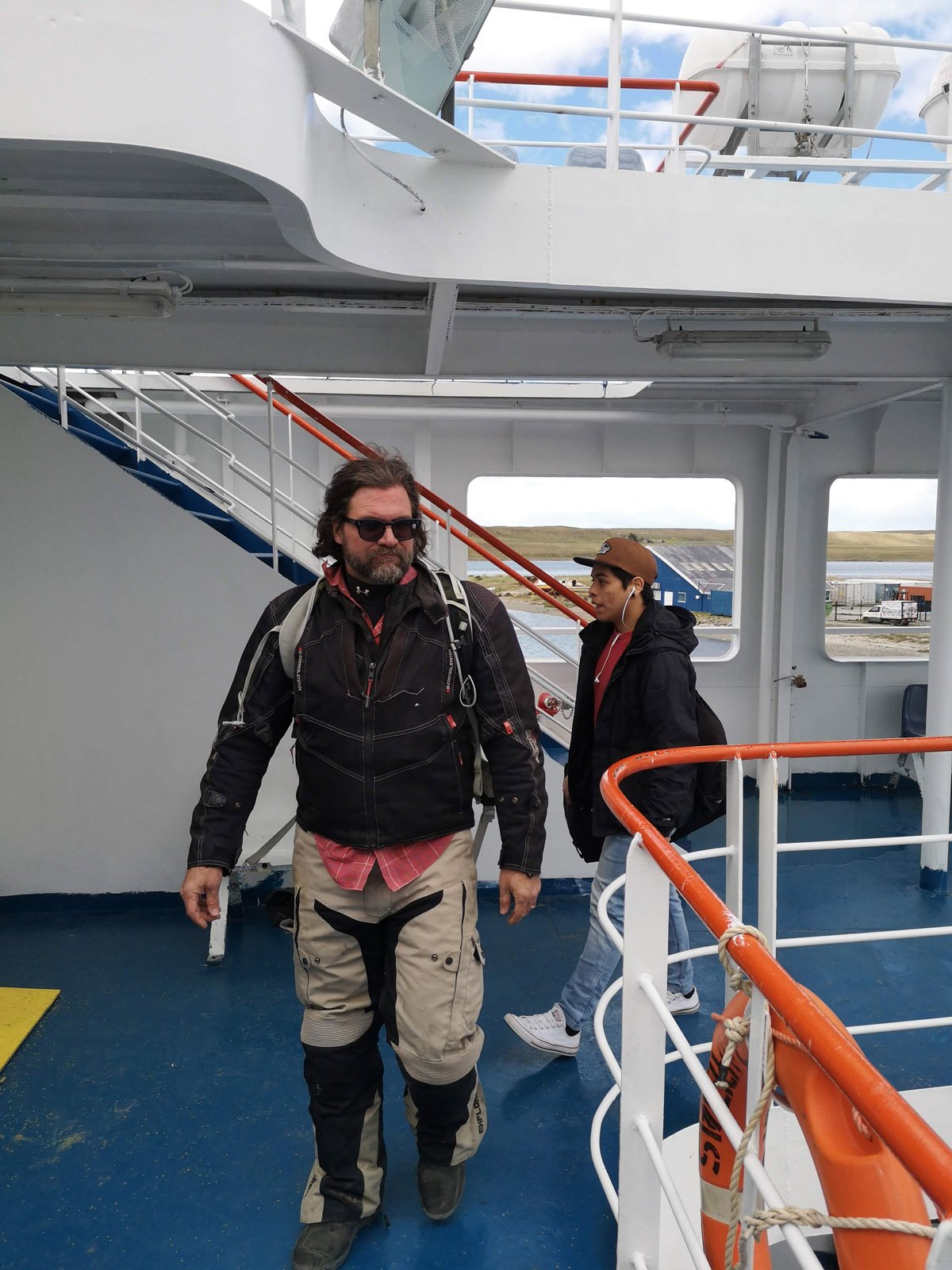 Chuck looking for a place to rest. 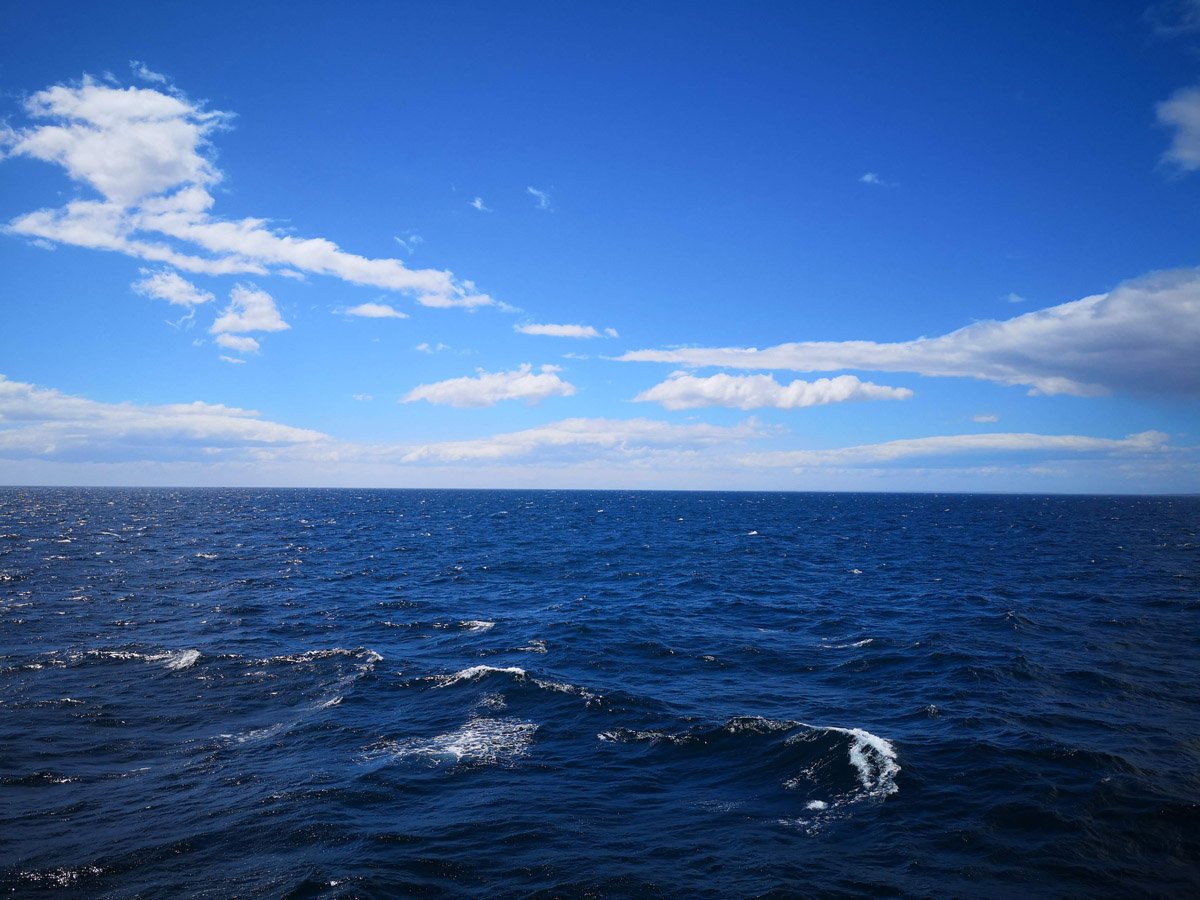 It was really windy crossing the Strait this day. It seems to be always windy. The idea of this photo was to show the wind, but it does not do justice to the actual conditions. When opening the door to the ferry, it would crash open and require substantial effort to close it again. Eventually we were no longer allowed to use the doors at front to gain deck access.

The ferry ride was a good couple of hours and we had lunch onboard from the canteen. Ham and cheese sandwiches again from what I recall, or maybe it was ham and cheese empanadas. 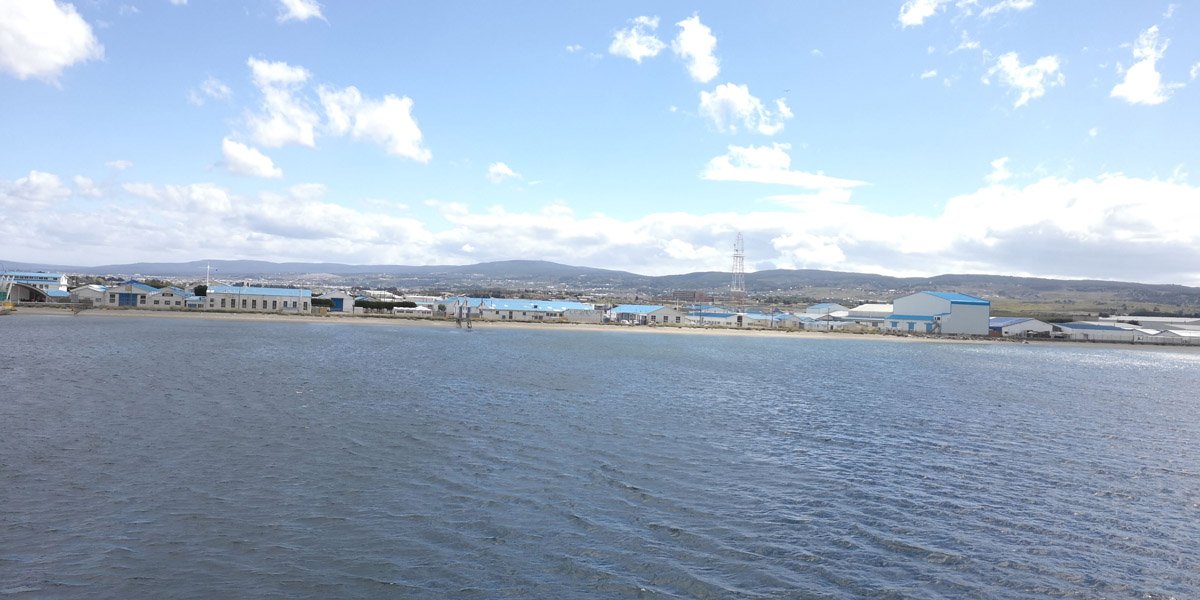 Coming into the city of Punta Arenas. From here it does not look like much, but it really is a very nice city with 127,000 people. 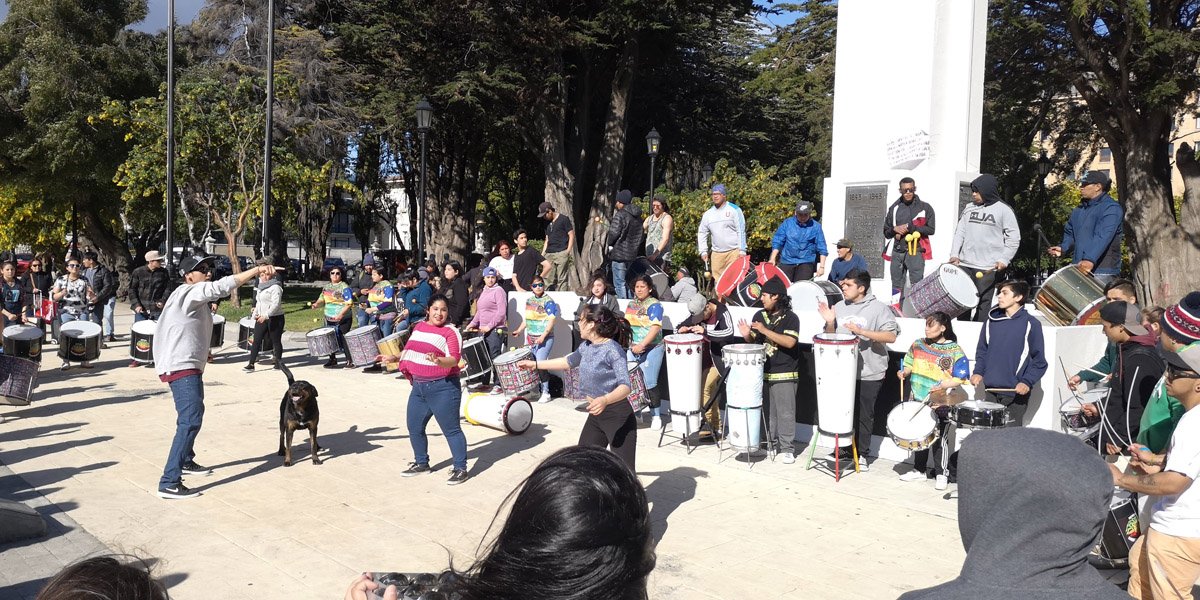 In a park in the downtown section of Punta Arenas where a drum troupe was beating out fantastic rhythm. The dog was dancing too. 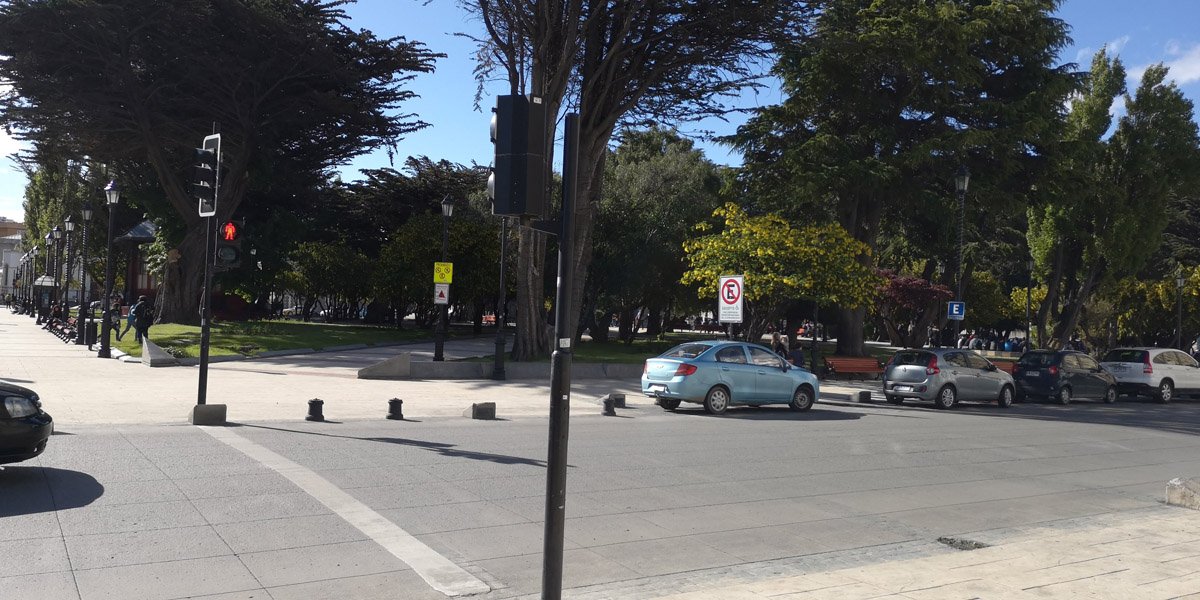 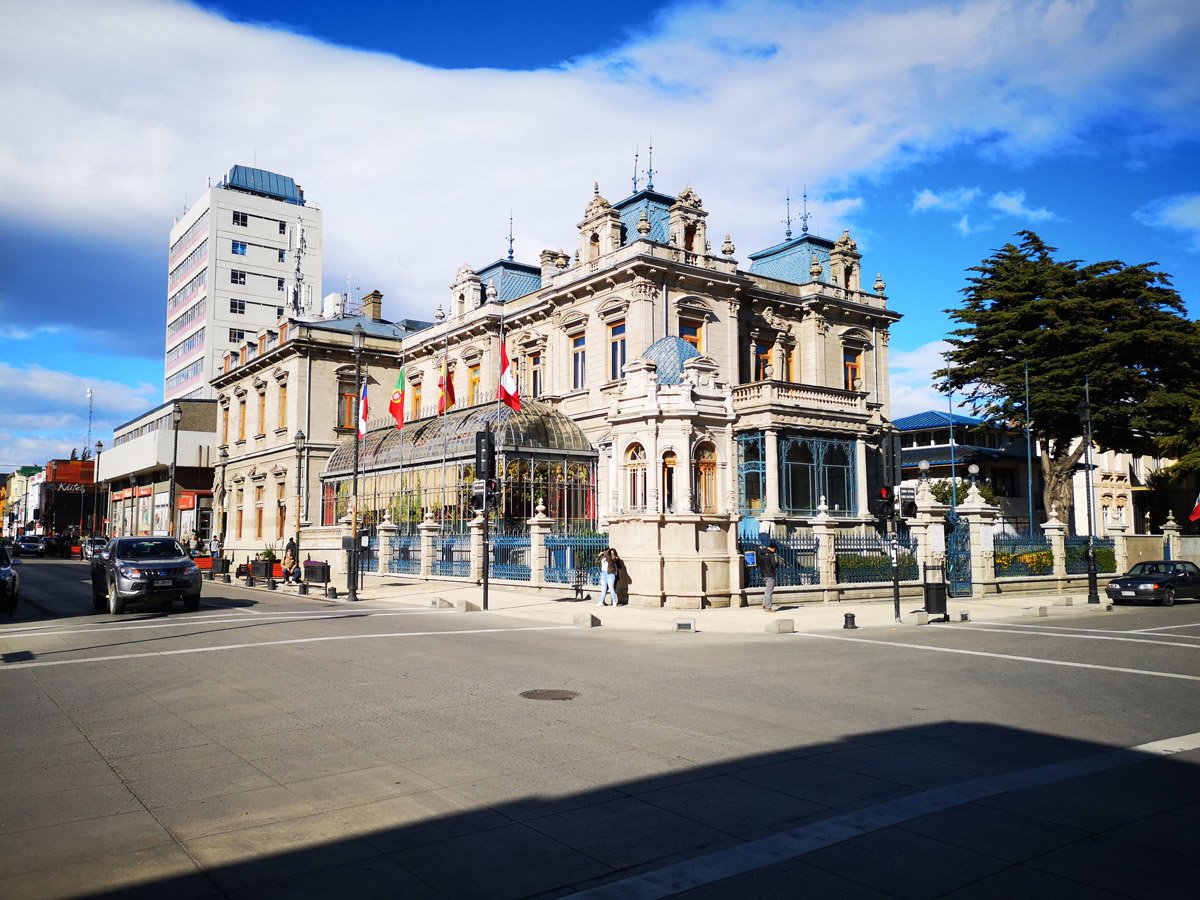 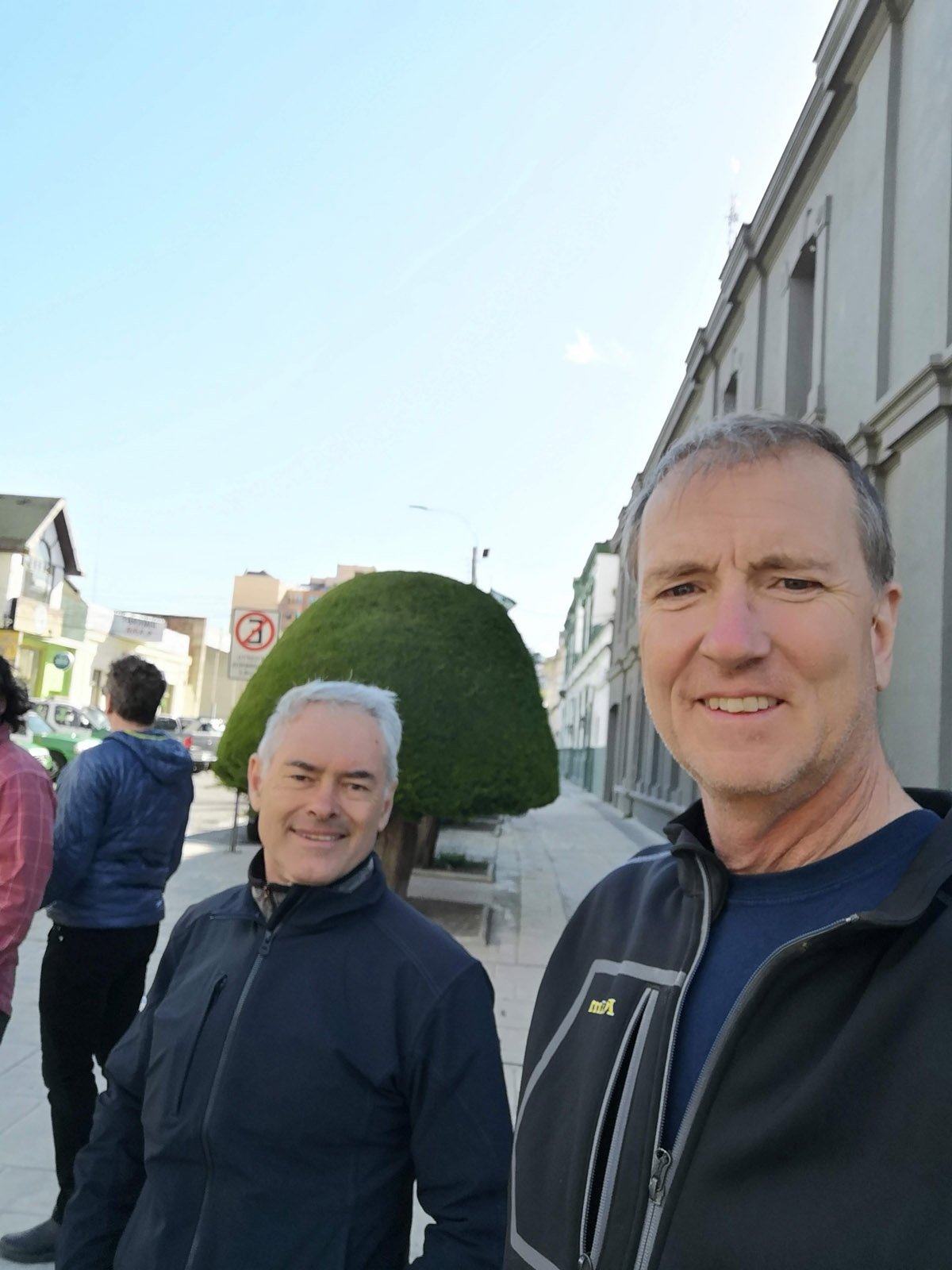 Selfie with Kurt as we explored the city 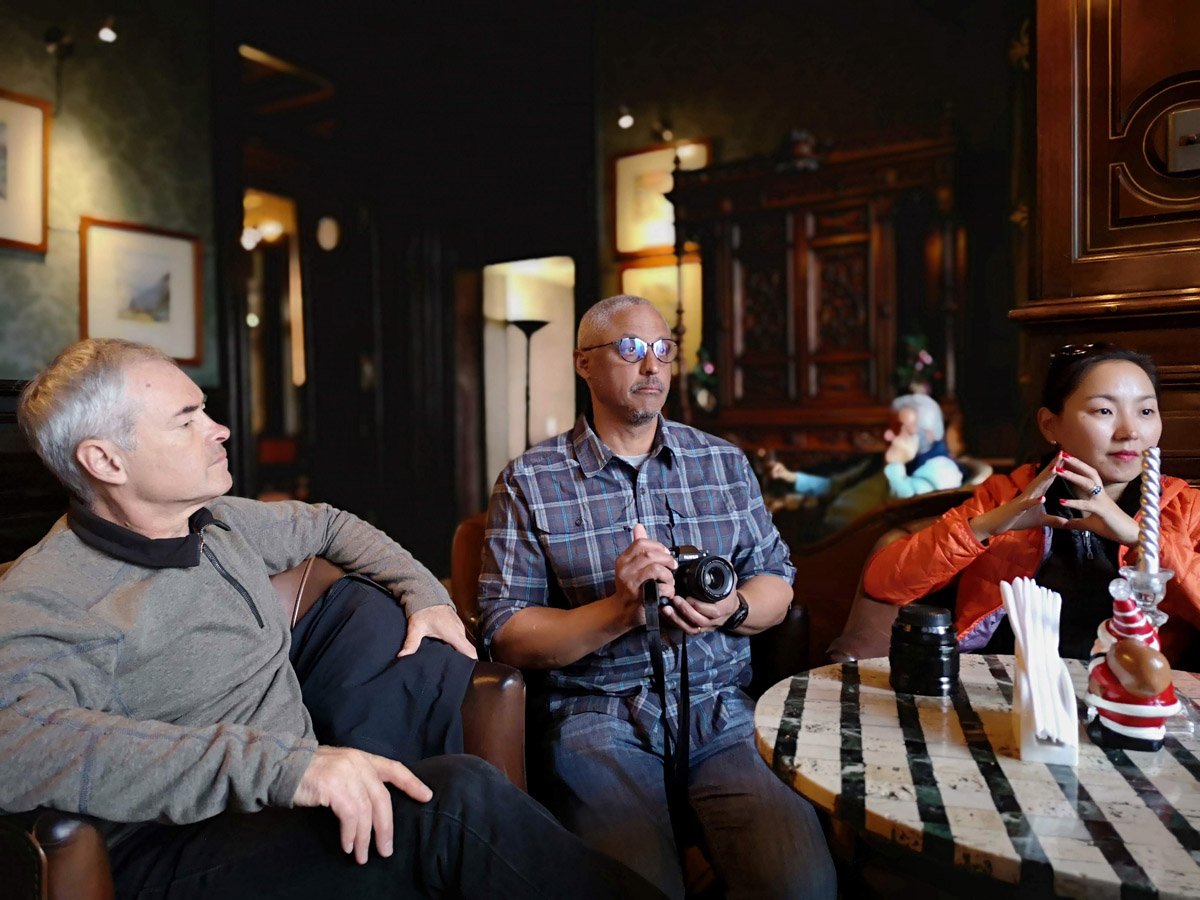 We stopped in at a pub that came highly recommended. This place was very posh. Kurt on the left, our photographer Phil and Ono who is our Mongol Ecology Center contact. 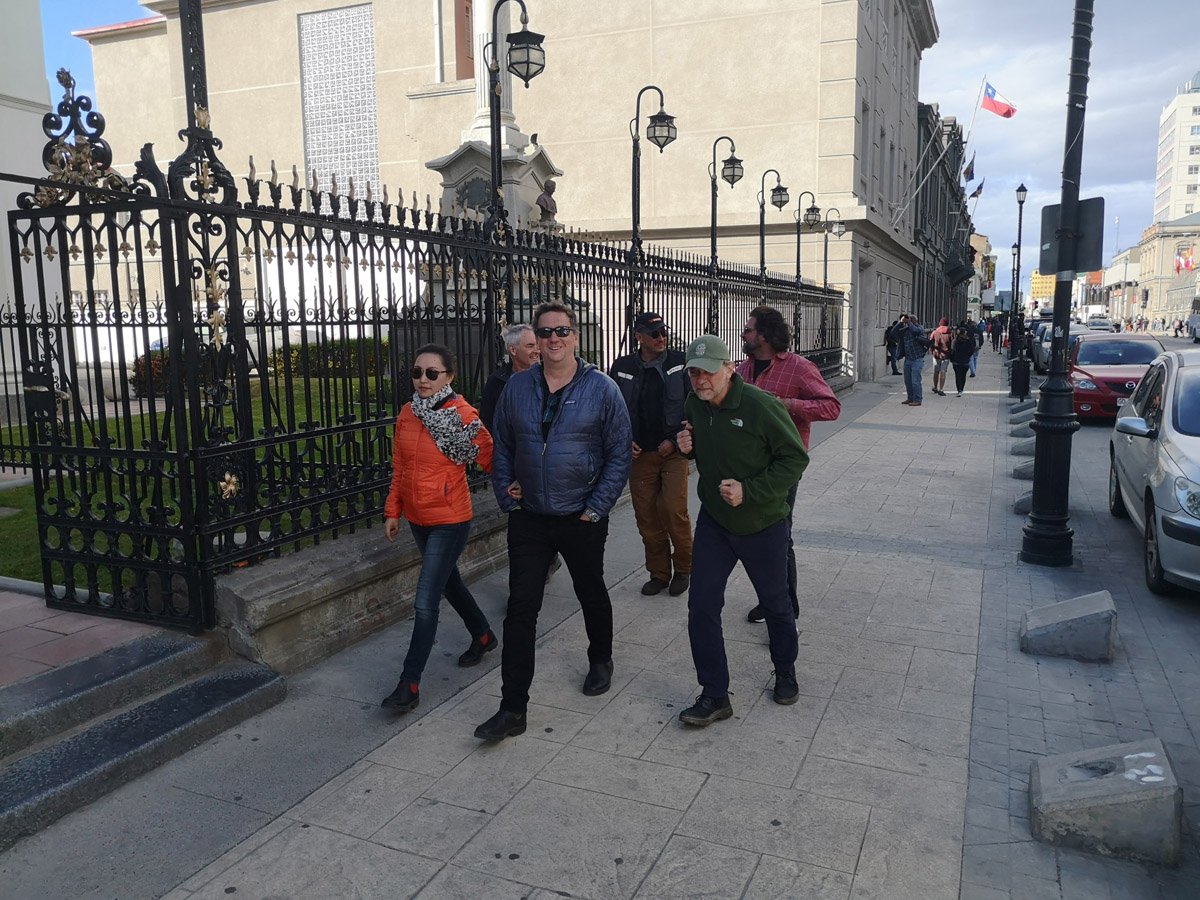 Because the days in Patagonia are so long at this time of year, we were gifted plenty of time to explore this amazing and historic city in Chile. This part of Patagonia was settled in large part by people from eastern Europe, in particular Croatia. Punta Arenas is the largest city in the Chilean Patagonia and provides access to Antarctica. It is one of three ports for accessing the icy continent, the others being Ushuaia and Auckland, New Zealand. That evening Moto Discovery treated us to an awesome meal at a great restaurant and we finished the day feeling fat and happy.

As with most of my stories, this one comes from memory and the memories triggered by the photos. Memory does not equal fact so if I have anything wrong or I missed something important, please use the comment section below.