After a well deserved rest in Ushuaia, we were told by Moto Discovery that our biggest riding day would be today. Today meaning December 7th as I am now writing these stories from memory so please accept that some facts may be wrong, if you were there, please offer your own memories in the comments below.

A big part of the Patagonia rally was the media crew. All along the way throughout the rally, there was a film crew and a photographer doing an awesome job of capturing the true nature of the rally. Sometimes this admittedly became burdensome on some of the long days when you really just want to get to the next destination. To alleviate this minor burden, a group of riders, myself included volunteered to head out with the media team a couple hours ahead of the rest of the group and get the footage that was desired for the Ushuaia area. This added two hours at the front, combined with the unforeseen struggles throughout the day, made my day on the bike more than 17 hours long.

This is the GPS track for the day. If you cannot see it try this link. 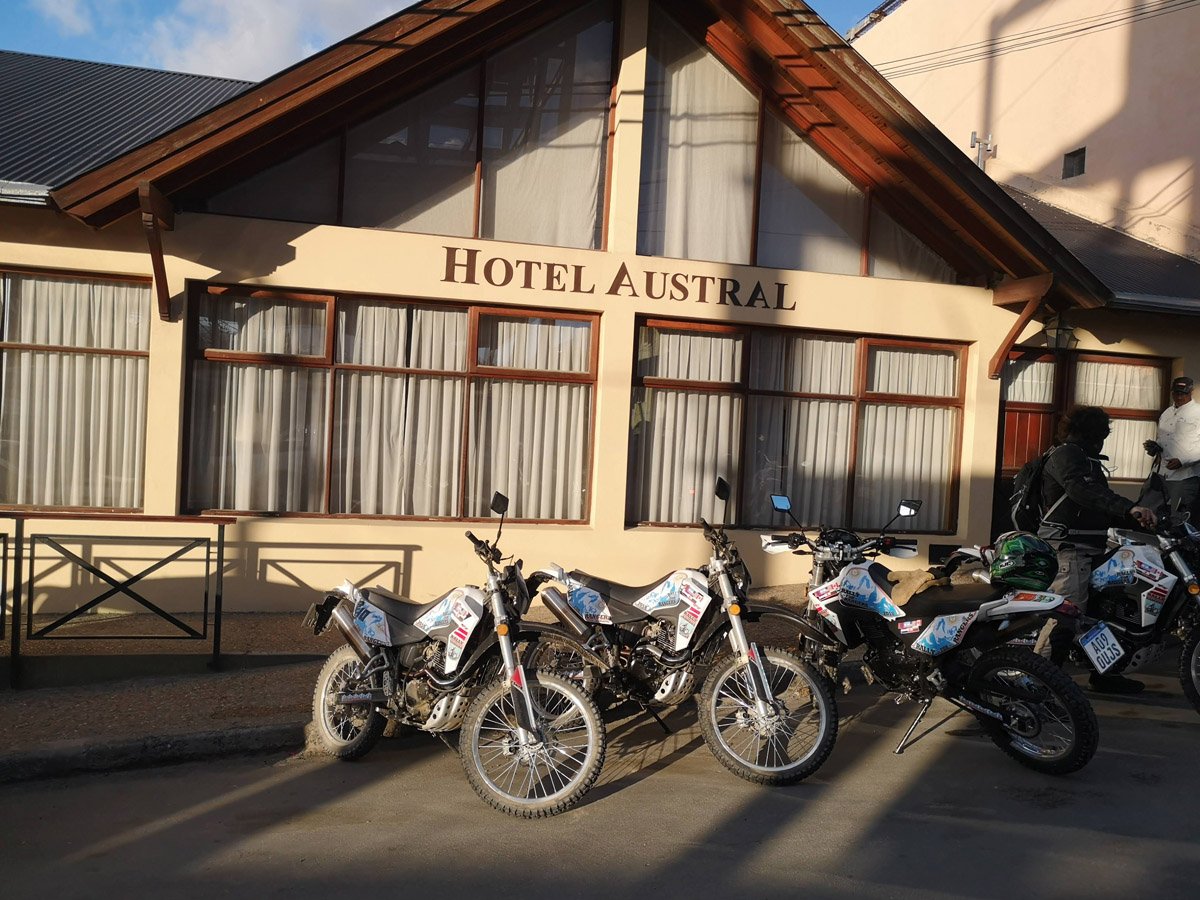 An early start at Hotel Austral in Ushuaia where we spent two nights. My bike is the one with the hand guards. I brought them with me and installed them for wind and rain protection. 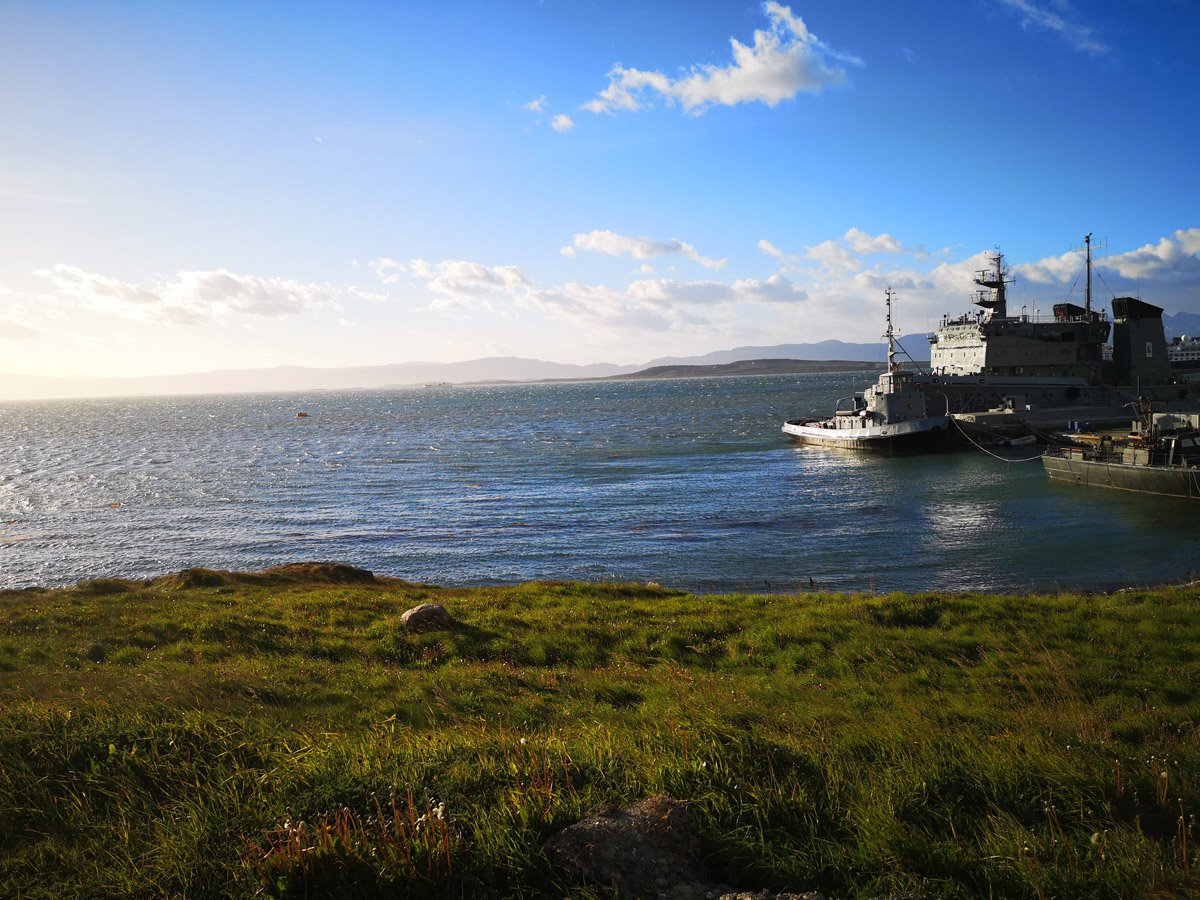 As we were leaving Ushuaia, I snapped this photo showing the wind already whipping up in the early morning. The previous day, the wind was so strong it was lifting the dirt from the shoulders of the roads. 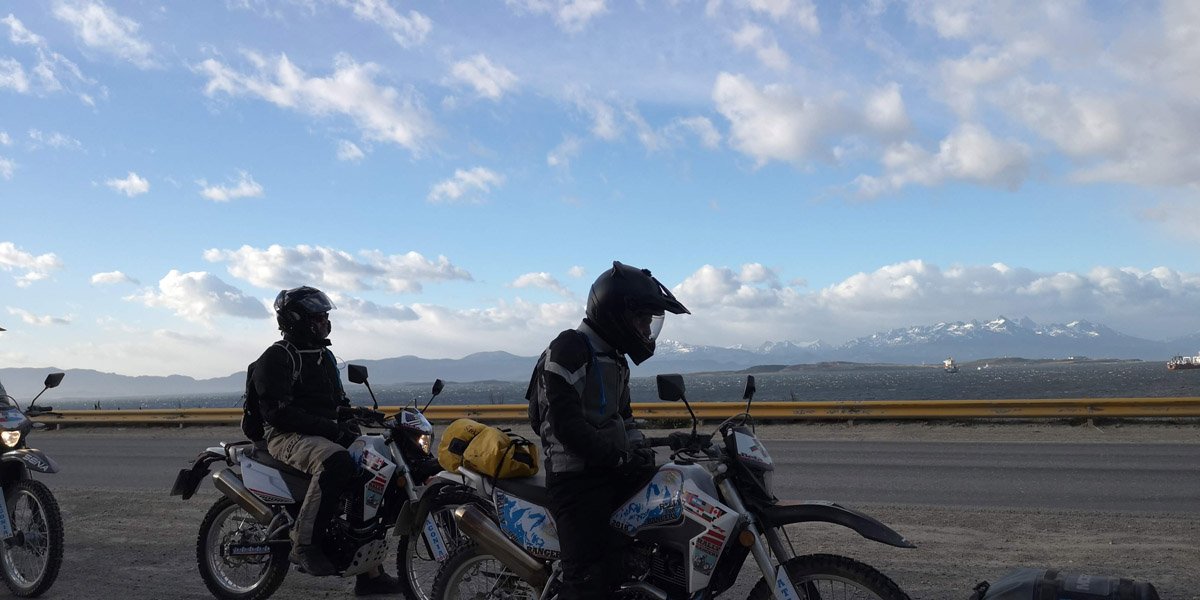 Media crew is getting some shots of us leaving the city, they are setting up the drone which does a remarkable job of flying steady in the crazy Patagonia wind. 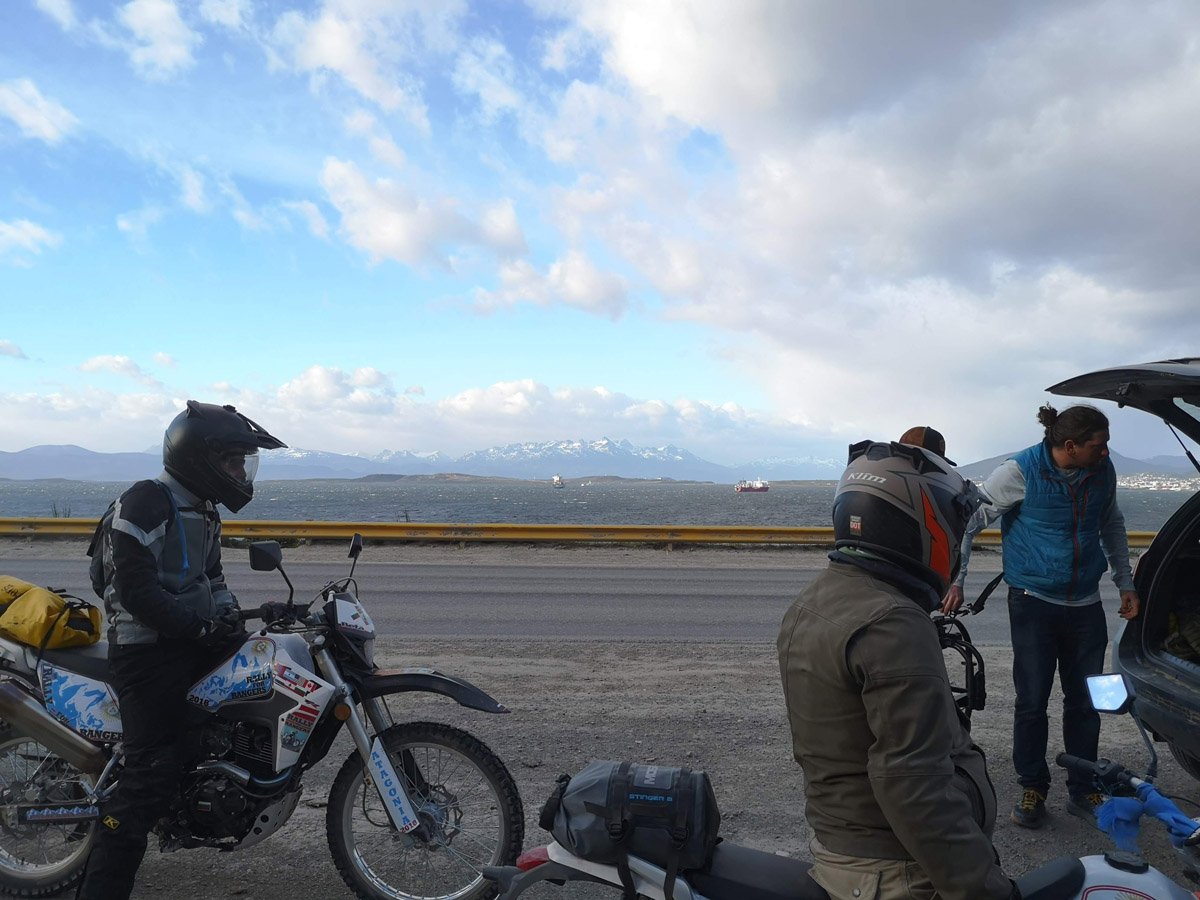 Aha (I hope I spelled it right) in the blue vest getting the cameras ready. Do we look cold? I do believe it was a cold morning at Fin del Mundo. 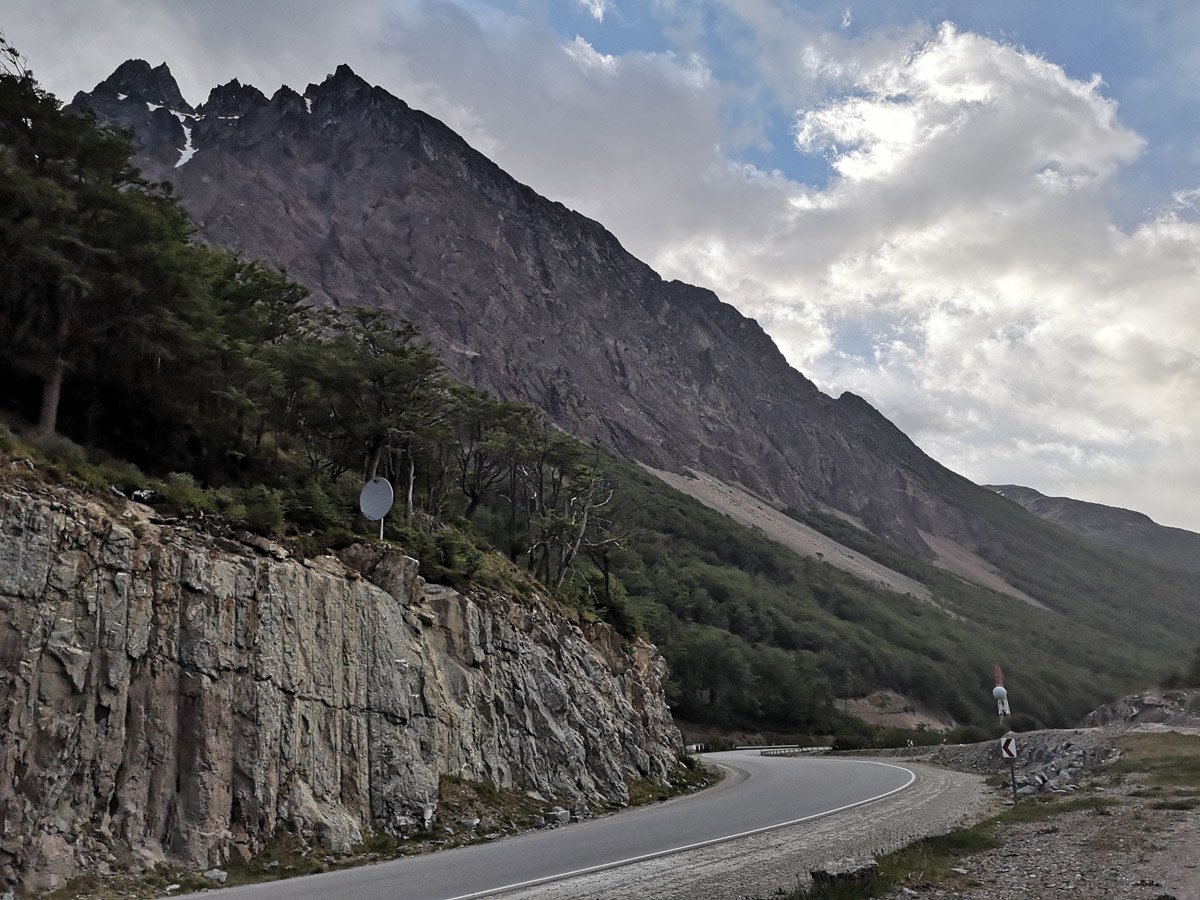 This is the mountain that was lit by the setting sun on our way into Ushuaia. I would have loved to have taken a picture of that glow, but use your imagination and picture that mountain cast in a golden light while the road itself is fading into the twilight. 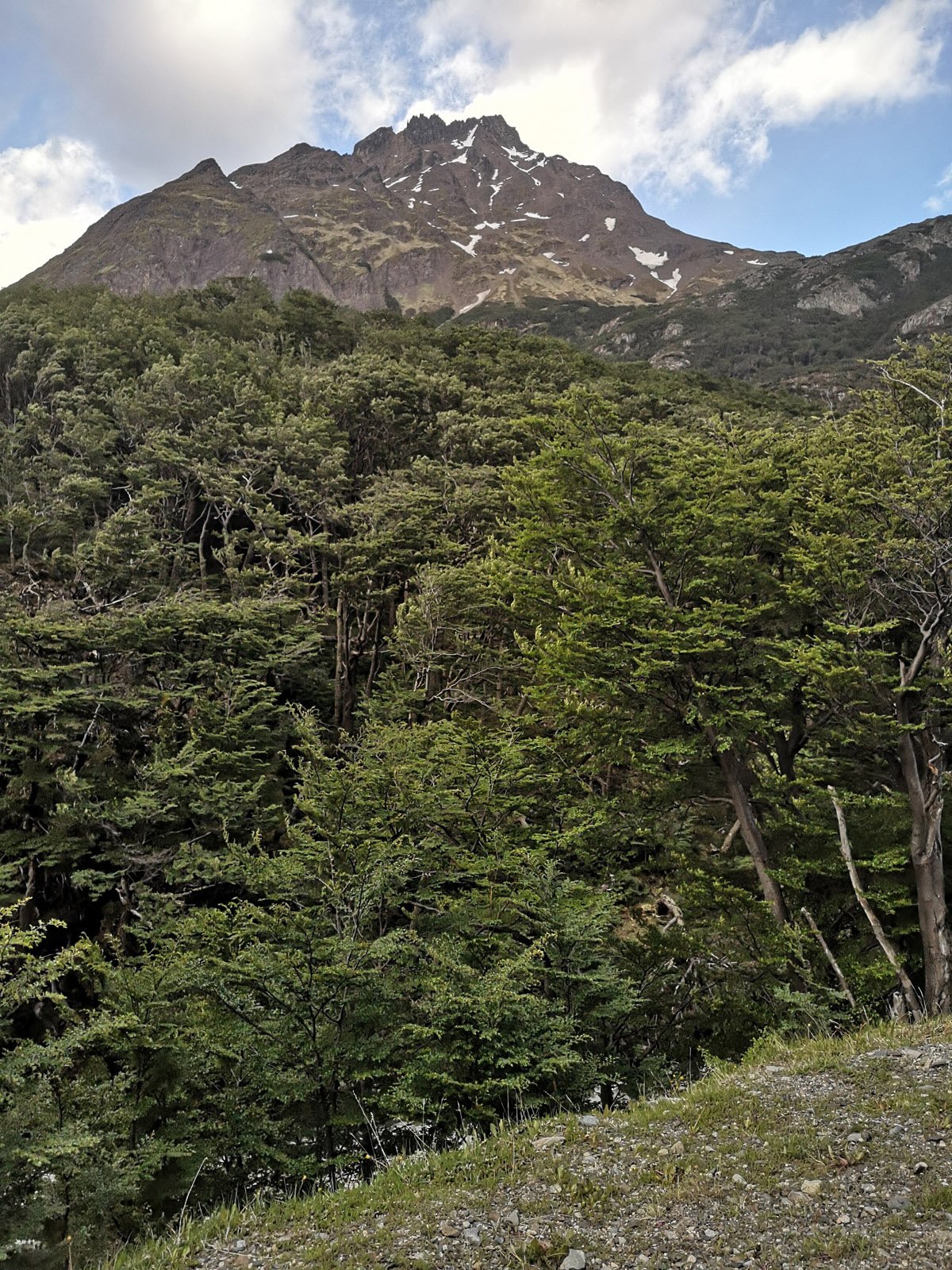 Shit grows in Patagonia after-all. It is strange to me how the climate changes enough that Ushuaia, the end of the world, is quite lush where just a few KM to the north, it is barren. 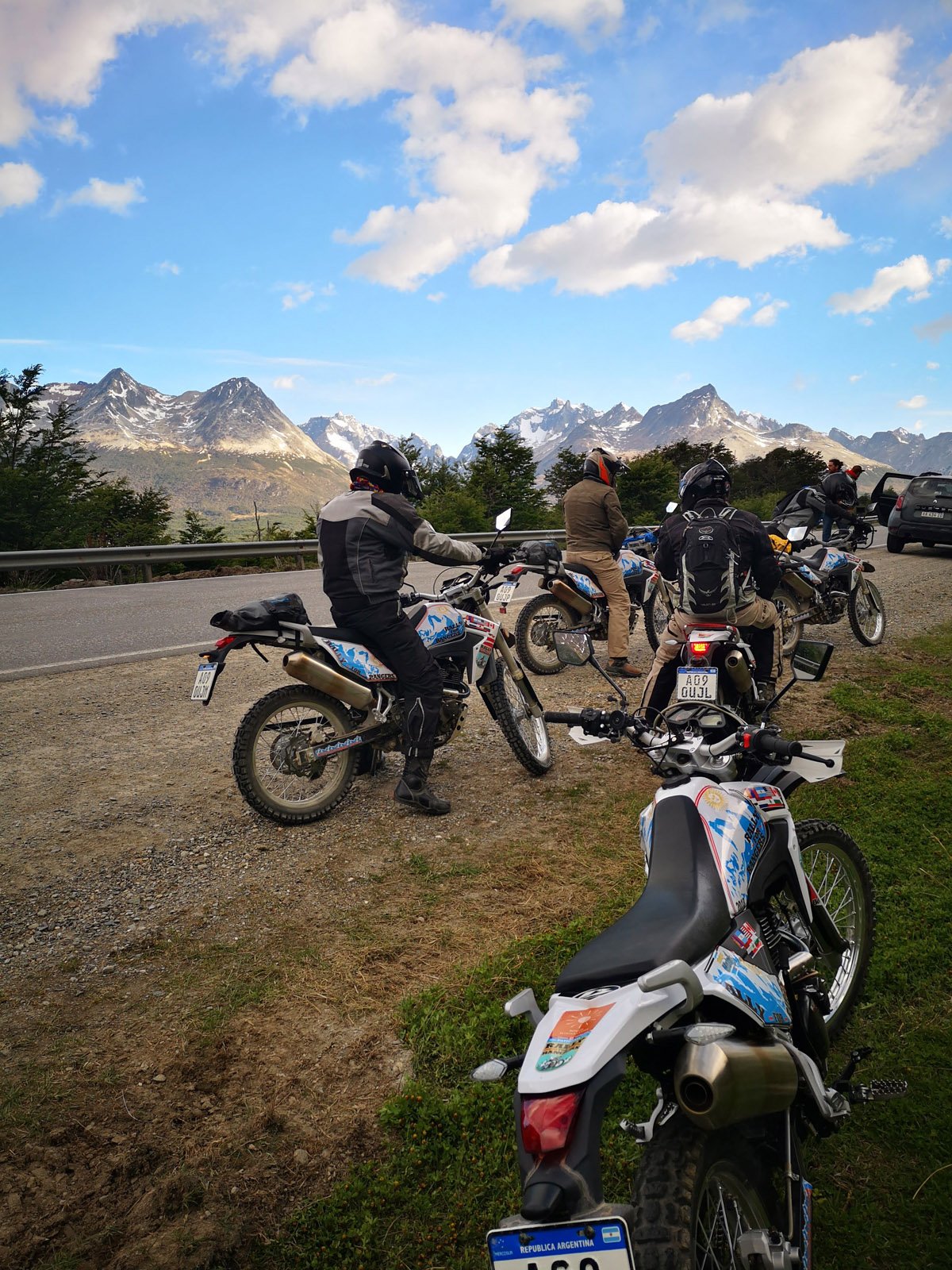 My sparkling clean Beta TR-2.0 among the rest of the early-risers with typical Ushuaia scenery. 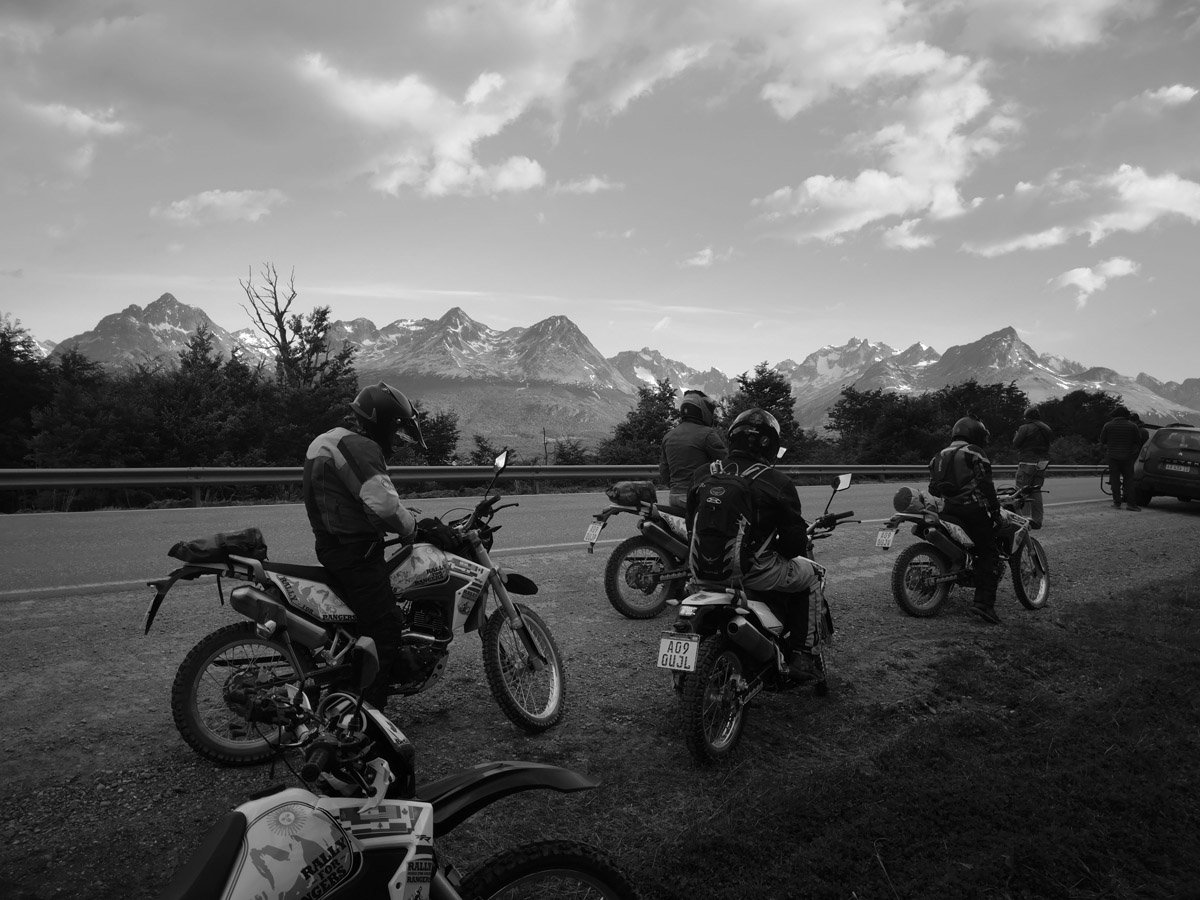 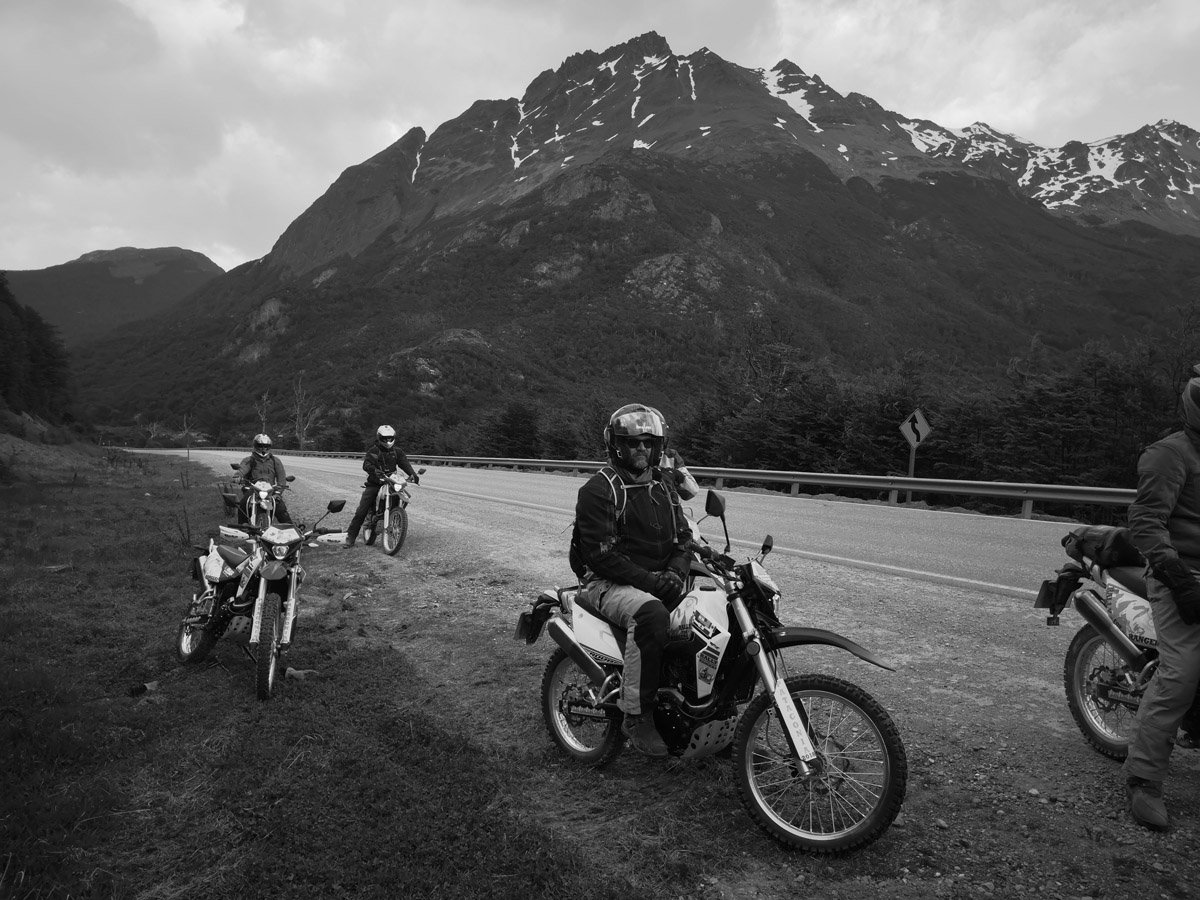 Some black 'n white just because. Every time I see Chuck with the Shark helmet in open-face mode I think he looks like a motorcycle cop. 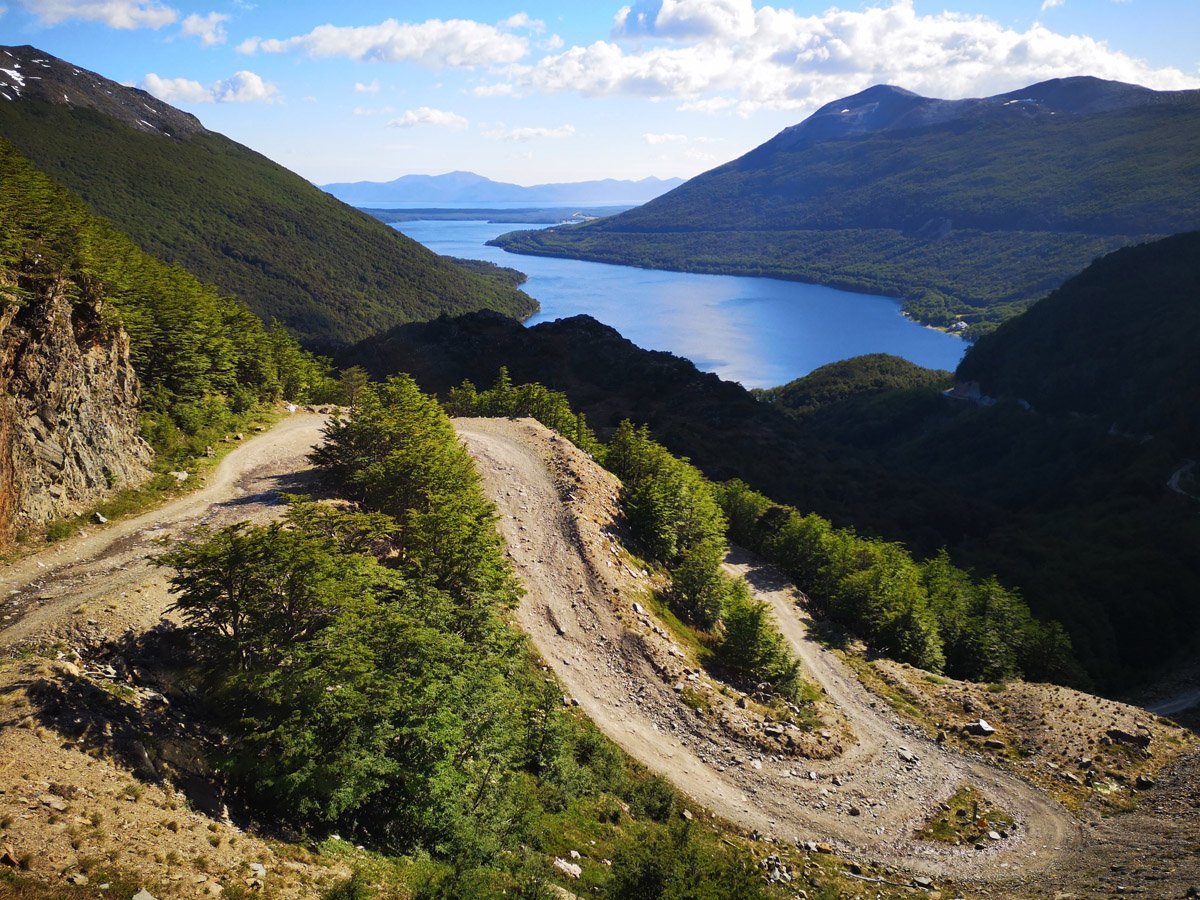 This is a Mirador Paso Garibaldi about 30 minutes outside of Ushuaia on the main highway.

From the Mirador (Lookout) you can see this awesome switchback trail going down into the valley toward the lake. The first time we stopped here I was thinking about what fun it would be to make our way down the switchback. Well, it turns out it is also a desirable photo/video opportunity so on this early morning, us early-risers got to ride this switchback a couple of times. The trail goes all the way down to the lake and then hooks up to the highway again but we didn't have time to do the whole thing. The original plan was the take the whole group up this pass but that plan wasn't to be either. Our morning group went down the hill and back again and the video crew liked the footage so much they wanted another shot so we did it a second time. The second time we went a bit further down the pass and when we turned around Tom asked me to lead the way back which was an offer I certainly enjoyed. With Orlin on my tail we tore back up the switchback at a pace that got the blood flowing on that cold morning. Not exactly fast, but fast enough that we were back at the top long before the rest of the group. This was the kind of riding I was hoping to do a lot more of, but we just had too much distance to cover on this Patagonia rally.

The Desdemona Shipwreck on the shore of Tierra del Fuego. 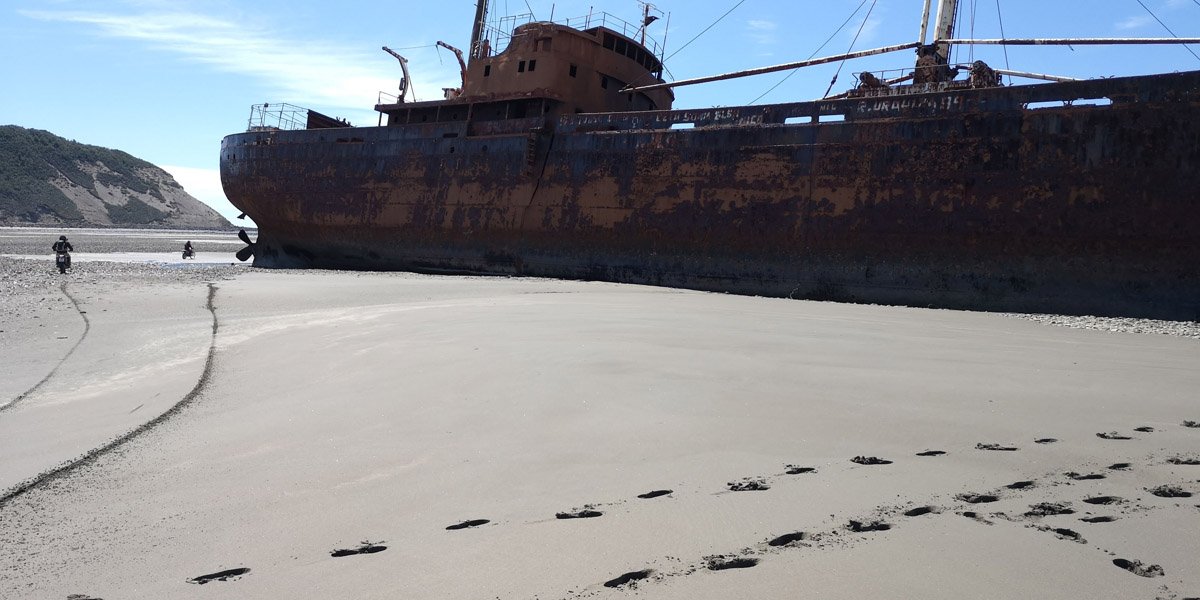 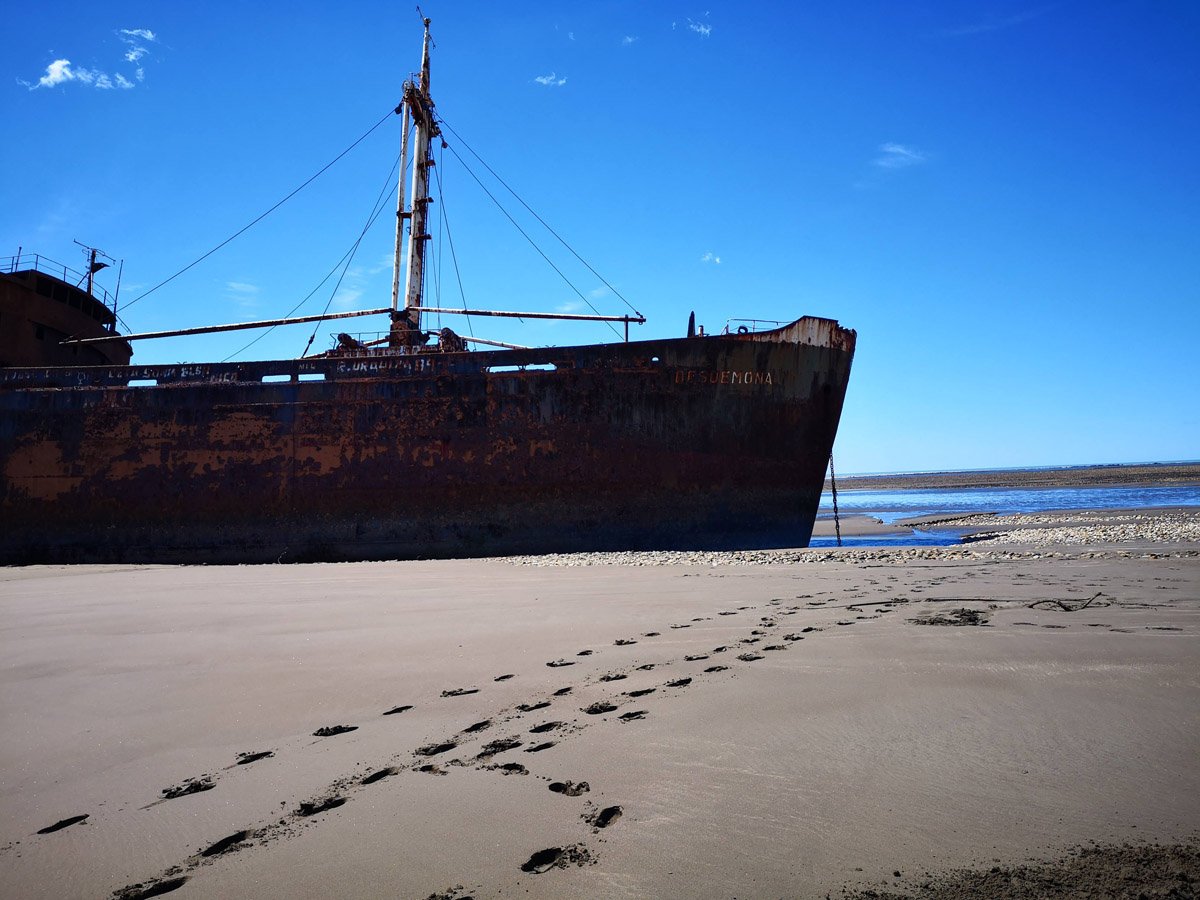 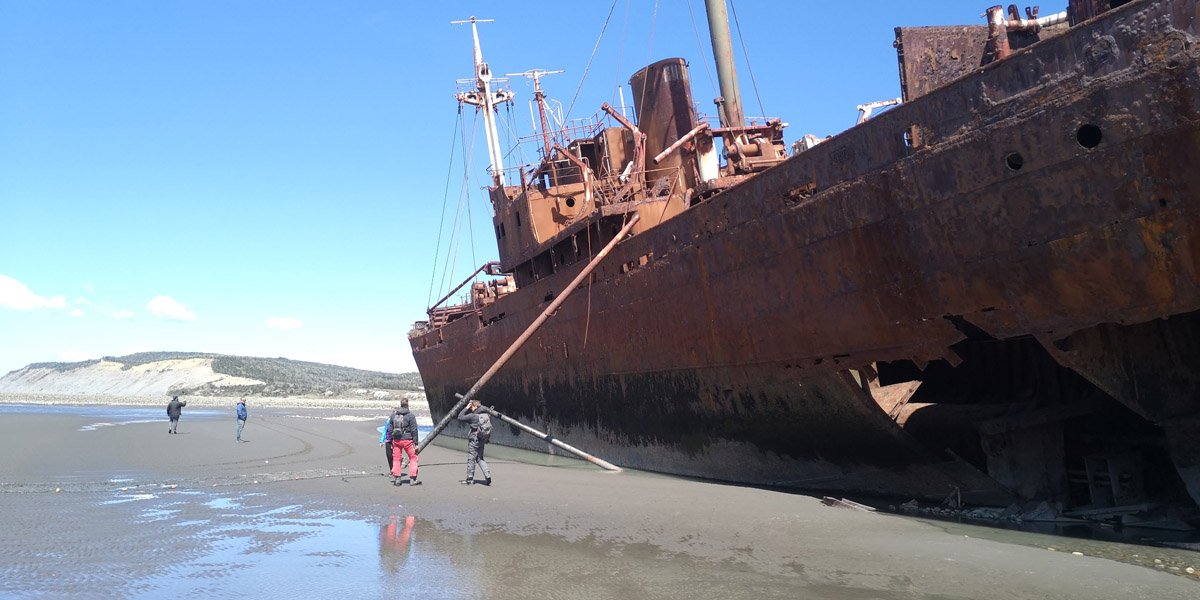 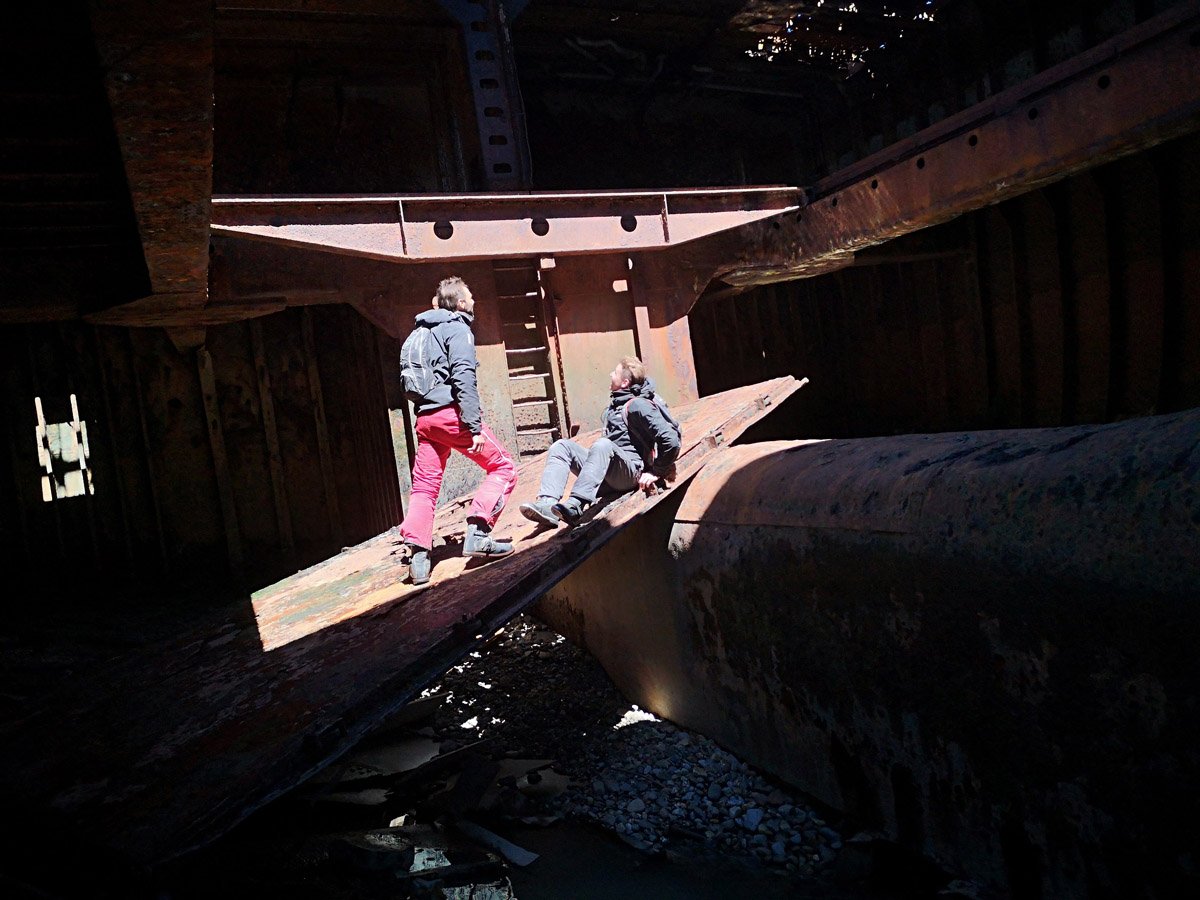 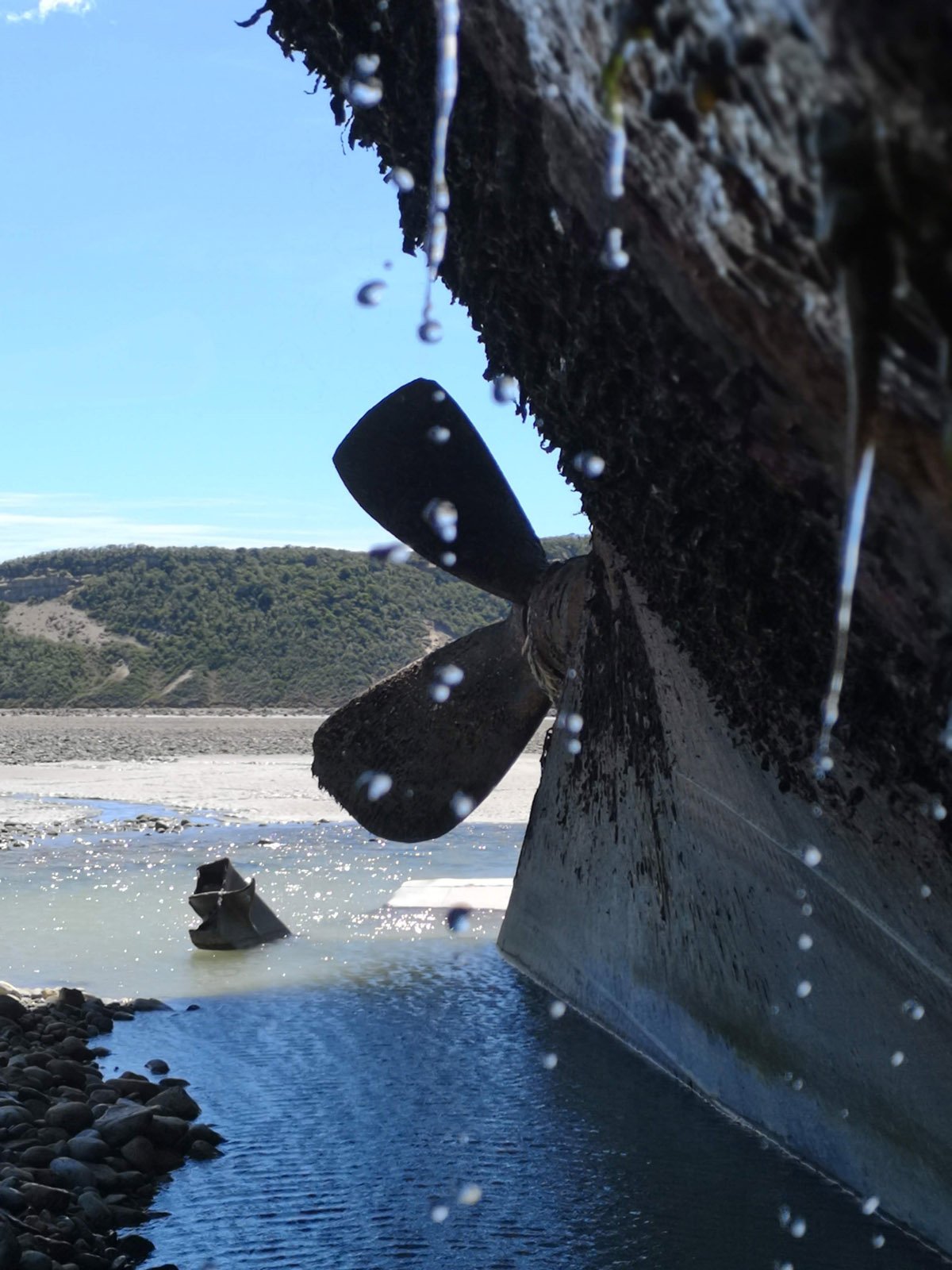 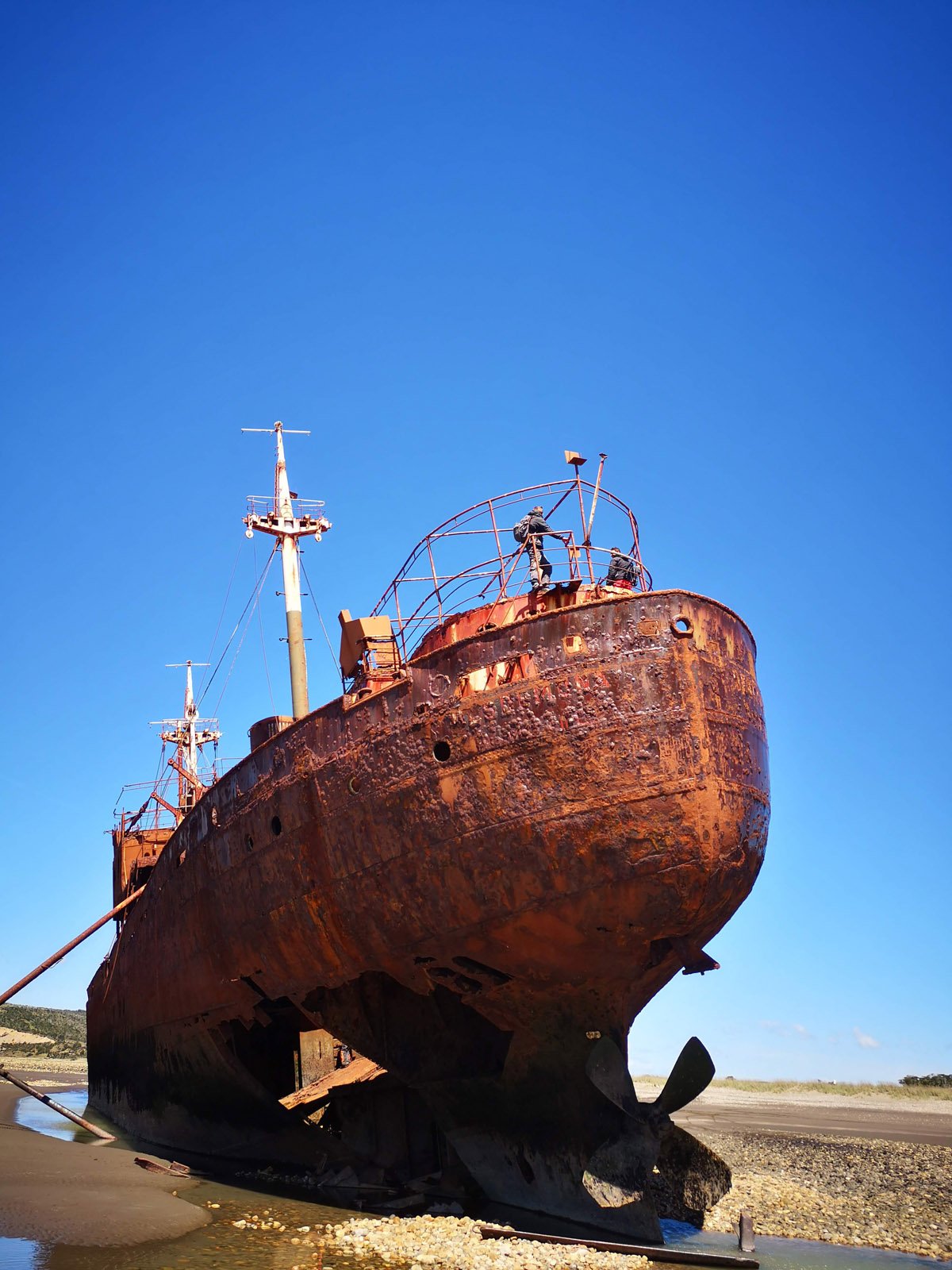 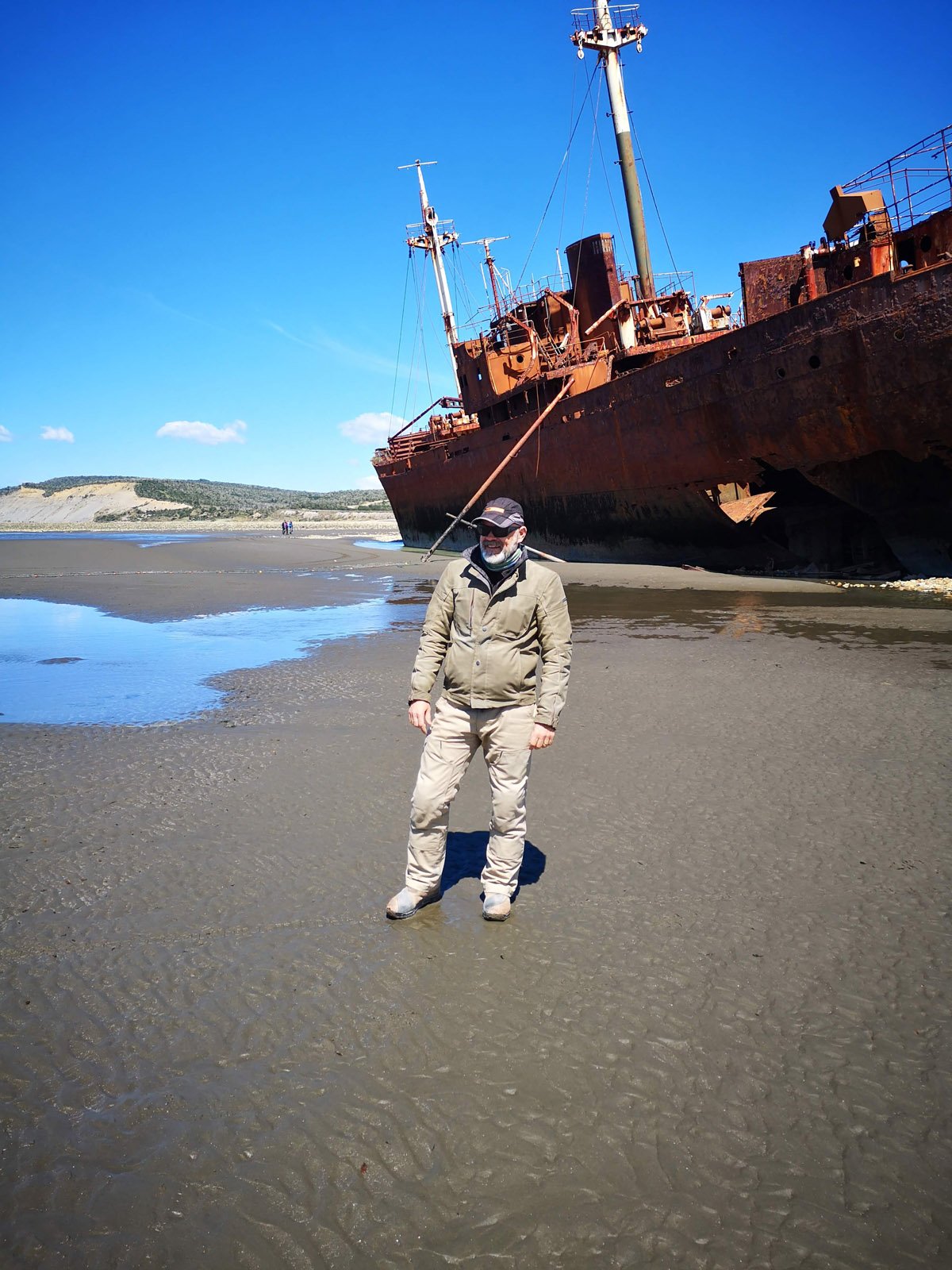 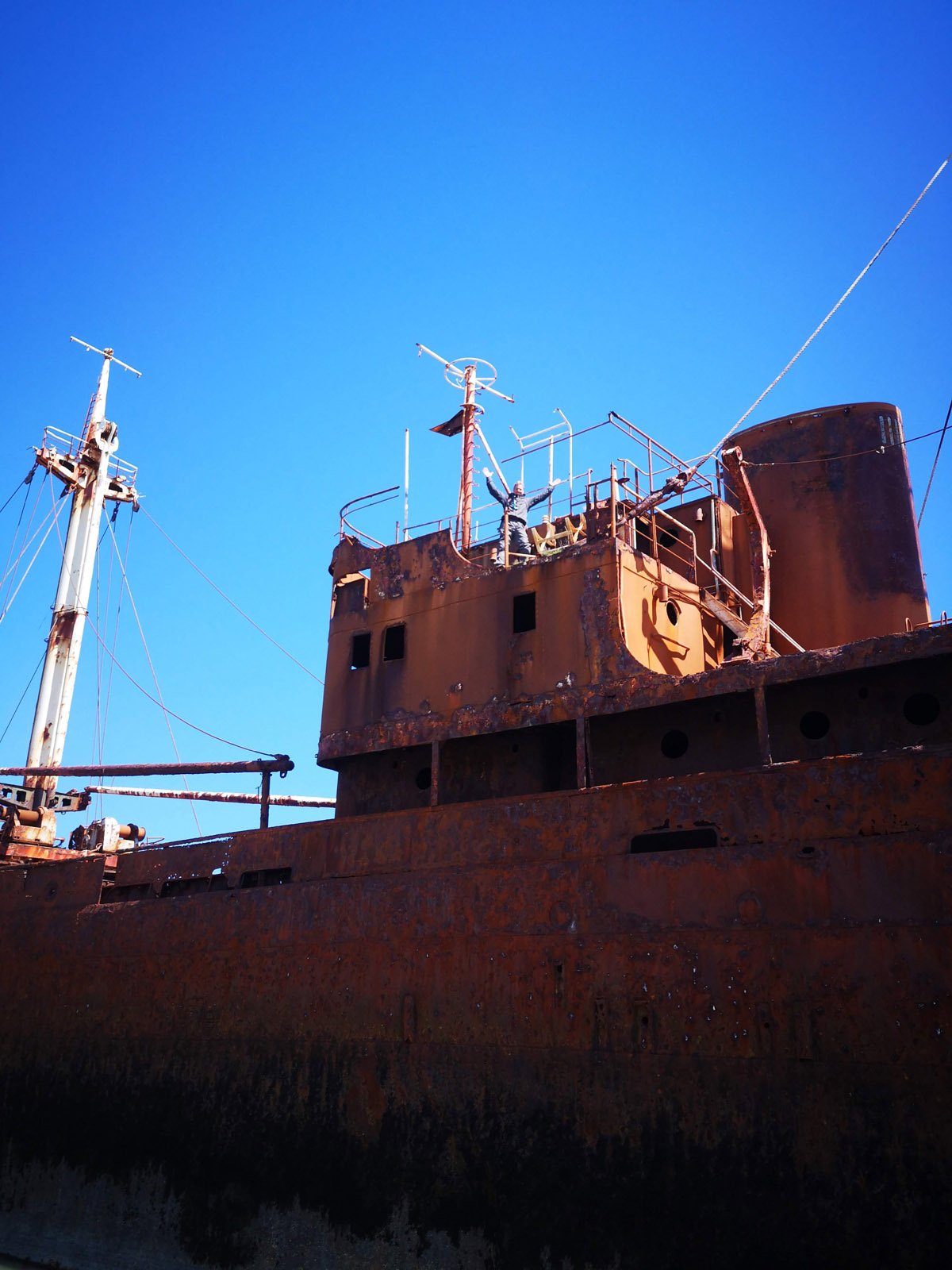 The pictures above all speak for themselves. The Desdemona shipwreck was an attraction that we traveled a long way off the beaten path to visit and it was worth the effort. In 1985 this cargo ship ran aground and remains fairly intact to this day. To get to the Desdemona, we turned off the main highway about 1.5 hours north of Ushuaia and we traveled down a dirt road for about 80KM and the old wreck was sitting on the beach just off the road. Riding a motorcycle on a beach has always been something I wanted to do and perhaps I have been on a few small ones in Northwestern Ontario, but this place got the juices flowing. After riding out to where the wreck was we parked the bikes and explored on foot. Robert and Steven explored every inch of the old wreck. There is a small village here so it must have looked like a bit of a jackass invasion when we showed up and started riding on the beach, but it was lot of fun and we didn't go crazy with it. That's not to say there wasn't any drama though.

Dylan, one of our videographers is a pro motocross rider from California. He has spent time riding with people I have only read about. He too had a desire to ride on the beach so he borrowed a bike and took off. He disappeared behind the shipwreck and never came back. After 5 or 10 minutes, I decided I had best go see what happened to our friend. I used my bike and rode off to where he was and he did indeed get himself into a pickle. 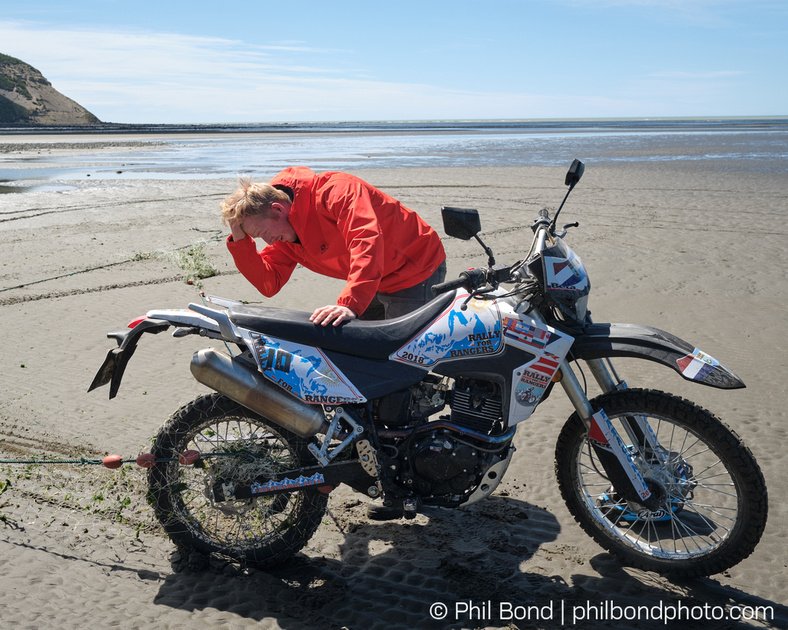 Dylan had crossed over a fishing net, the same fishing net that had been run over by a half-dozen other bikes just minutes before but for Dylan, the net got eaten by his rear wheel and sprocket. I pulled up and handed him my Leatherman to free his wheel. It was going to take a while. I rode back with my report and a few of the guys walked out to help him. I rode back while later to see how he was doing and he said "I am doing alright with the bike, but we have another problem, I need Roberto." Roberto is our local Argentine guide and his unique skillset was required to negotiate a truce between Dylan and the lady who owned the fishing net that was tangled in his wheel. In the end, we all gave $10US each to free Dylan and we got back on the road shortly after.

Visiting the shipwreck was only supposed to take a couple of hours, but with the fun and excitement at the Desdemona, we spent a couple hours more than we wanted to. On the way back out to the highway, more drama unfolded. One of our riders fell off his bike while crossing a bridge. He is not sure exactly what went wrong, but I believe he ploughed into a loose board that jumped up when the rider in front of him crossed. This rider is tough as nails though and despite hitting the ground hard, he got himself up and running quickly. The bike sustained some minor cosmetic damage and broken mirror, but this event also came with a time penalty. By the time we got out the highway it was already 330PM. We were only 120KM outside of Ushuaia and we had 350 more to go to get to Cerro Sombrero which is in Chile, which means another border crossing. 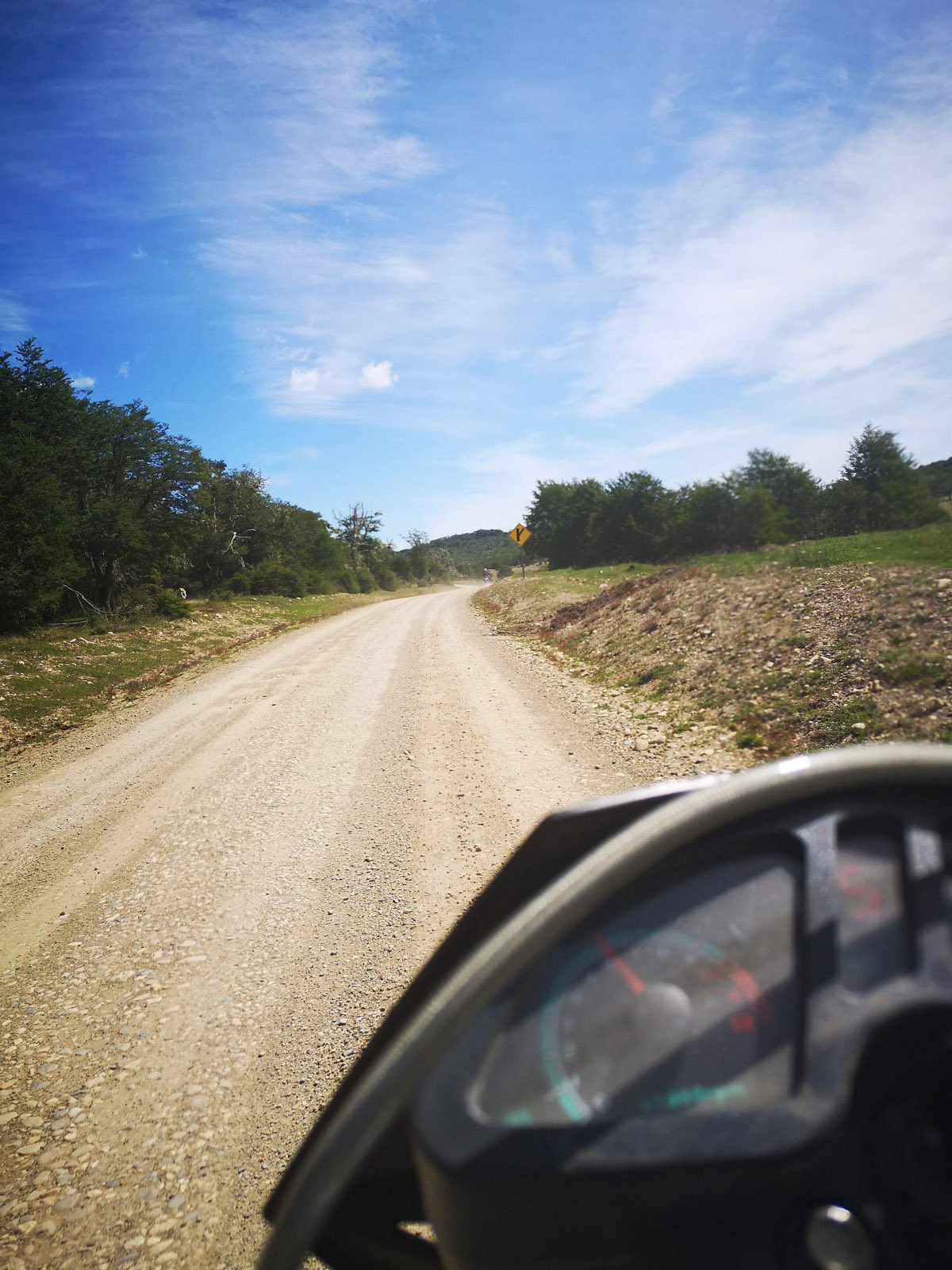 This is the gravel road we took to get to the shipwreck and we are on the way back to the highway. I liked to ride on Roberto's tail ensuring we maintain a good brisk pace but taking a picture while running 5th gear wide open set me back a few meters. 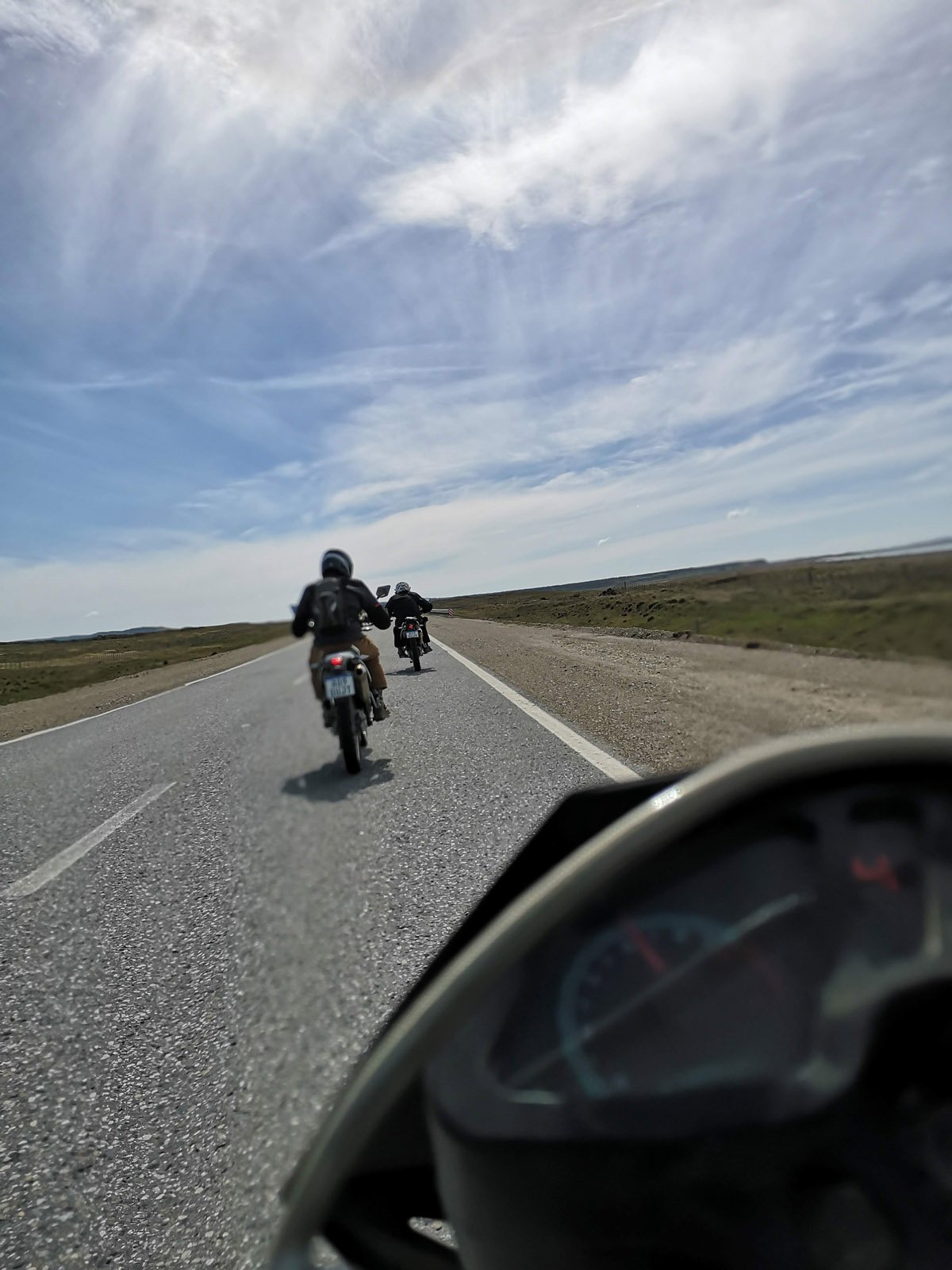 Once we got back to the main highway, the wind was brutal. It was blowing across the open fields toward the Atlantic coast and often the best speed we could get was 75km/h. The bikes were riding tilted from the wind. 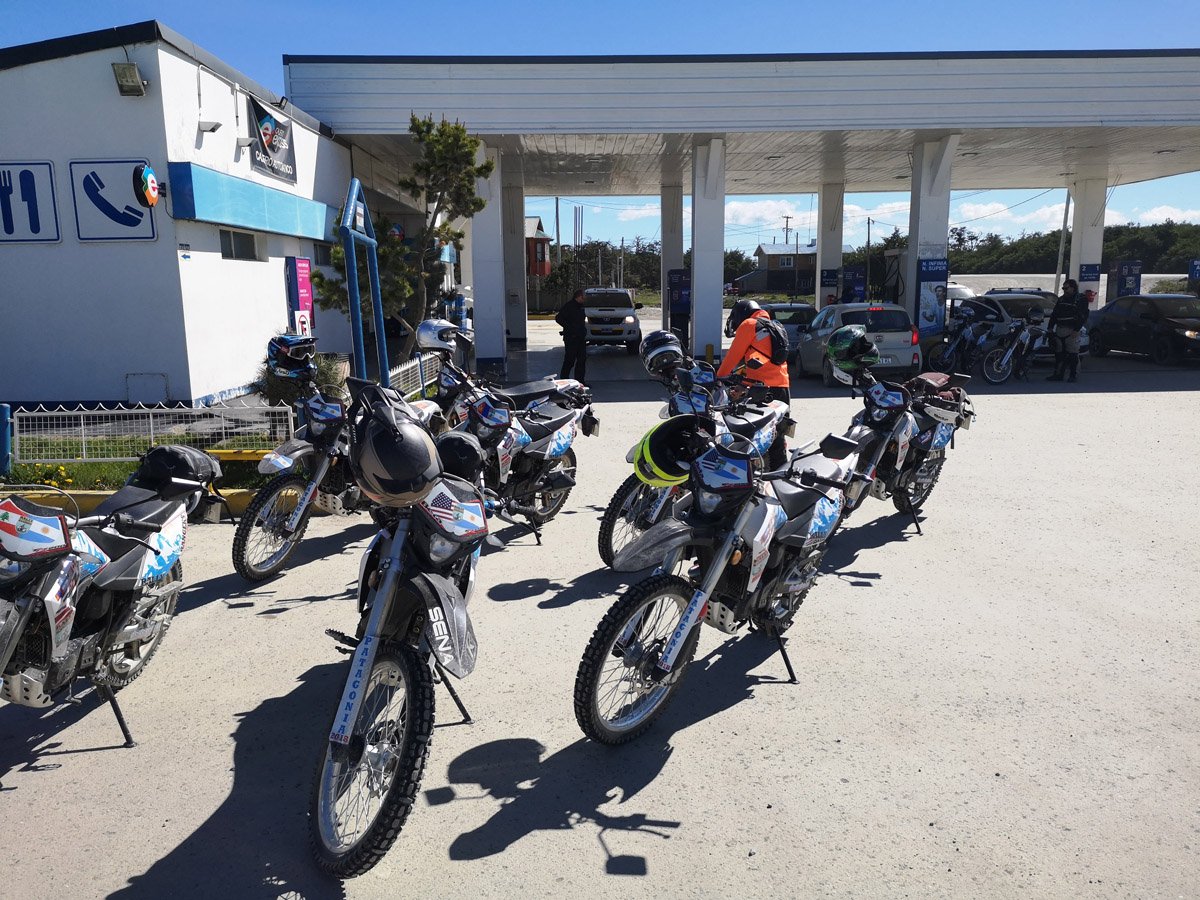 Our favourite gas station near Rio Grande where another hour or more was spent. There was a Beta dealer in Rio Grande and the Moto Discovery boys brought one of our bikes in for repair. More delay in an already long day.

Eventually we made it to the border. This particular border crossing has a large "no man's land" where you go through the Argentine customs, ride for 20 minutes and then go through the Chile customs. Both of these tasks are long and tedious and yet another mishap materialized. Roberto had a problem with his own paperwork and the Chilean officials sent him back to the Argentine customs to have it resolved so we left our guide behind. We had no choice, it was about to get dark and we had 120KM of dirt road still to go so Scott in the support truck was guiding. We were making pretty good time but daylight was fading and so was the fuel in our tanks. We stopped and gave every bike a little bit of gas and got back on the road and it started to rain. The rain nor the sun stopped falling so now it was dark and wet and cold. Putting the headlight on high beam didn't help at all, it just moved a dim light a few feet ahead. We kept on riding all the way to Cerro Sombrero. The group was separated with a sizable gap. The front group arrived about a half hour before the rest and Roberto was another hour behind them but we all made it safely. Chuck exclaimed that this was the best day of riding we had so far... he absolutely loved the struggle. I didn't mind it so much, but I wasn't near as pumped as Chuck and 17 hours on the road left me ready for bed.

Full photo gallery on Google Images can be found here.