Too Many Projects, Not Enough Room & What Makes a Bike “Vintage”?

As can be seen in the above photo, I have too many projects on the go, and not enough room to do them.

My first project didn't actually have anything to do with motocross. I finally grew tired of putting studs in my rear tire and attaching my homemade front ski, just to ride it once or twice, realize it was a foolish endeavor to begin with and go back to sulking all winter. When my Dad and Brother told me they knew a guy with a snowmobile he was willing to part with for $1000, I jumped on it. 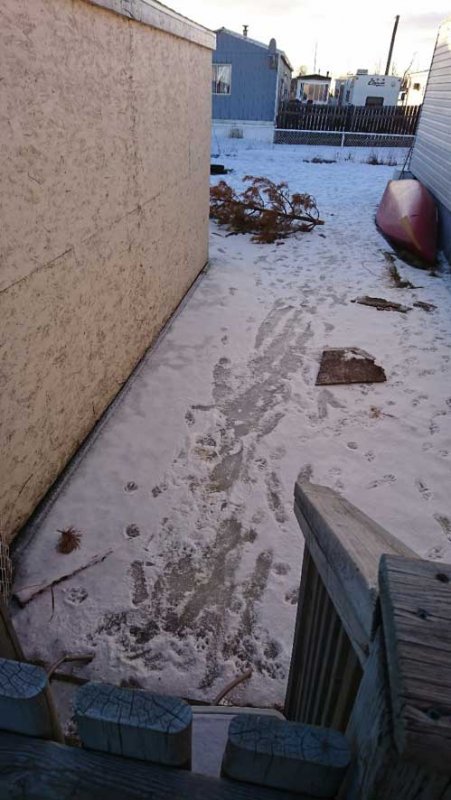 I had decided to make a gate off the one side of my shed to store the sled in my backyard under a cover. Unbenounced to me, the water leak in the trailer park from a month previous, had left my entire backyard (along with 2 trailers and lumber where I had planned to build a gate) under 8 inches of ice. The only place left to store the machine would have to be my shed.

The sled was a 1999 Arctic Cat ZR 700 and was in immaculate shape. My brother Mike brought it up to me from BC a week after he and my Dad picked it up and we took it for a test ride with my father in law Dean that weekend. Dean is a madman on a sled and I quickly realized that if I was going to keep up to him all day (while retaining my ability to walk afterwards) some ergonomic adjustments were in order.

So I spent a Thursday and Friday night frantically trying to install bar risers and construct a seat wedge that would hopefully allow me to survive my upcoming weekend ride with Dean. With no room in the shed to work, the tailgate of my truck became my workbench. The only bar riser block I could find in town was the wrong size and took some work with a drill and hammer to make it fit. I built the seat wedge on my tailgate, with a flashlight in my mouth in the dark, operating power tools. It was only in the light of day that I could truly appreciate how poor of a job I had done and was forced to take it off and tweak it for the third time. 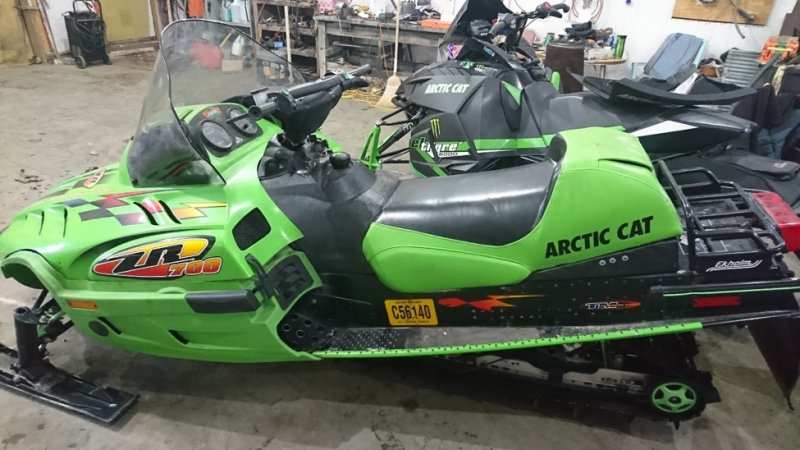 Above is a photo of the sled with the completed homemade seat wedge.

Finally I was done my ergonomic adjustments and it was time to test it out in the field next to my tin can I am forced to call home. Until this very moment the ZR had fired up within three pulls of the cord, every time. I pulled and pulled and pulled and when I was too exhausted to pull, I pulled again anyways. Only after pulling for 10 minutes did I think to check if I had spark… I did not. I recalled that during the installation of my bar rising block I had pulled too hard and a few of the wiring harnesses had come unplugged. So I called my Dad (who had the manual because my brother Mike had forgotten it) to get him to look up the wiring diagram and help me to troubleshoot. After spending half an hour thinking plugs were frayed at the connections and hard wiring them together with marrets, we found the problem. One of the harnesses I had plugged back in and subsequently hard wired together, was for the kill switch that was supposed to be disconnected because it was no longer on the machine. I disconnected it and at last I had spark! Unfortunately I had flooded the engine and fouled one of the spark plugs in the process… On the bright side I found a spare in the seat pocket. 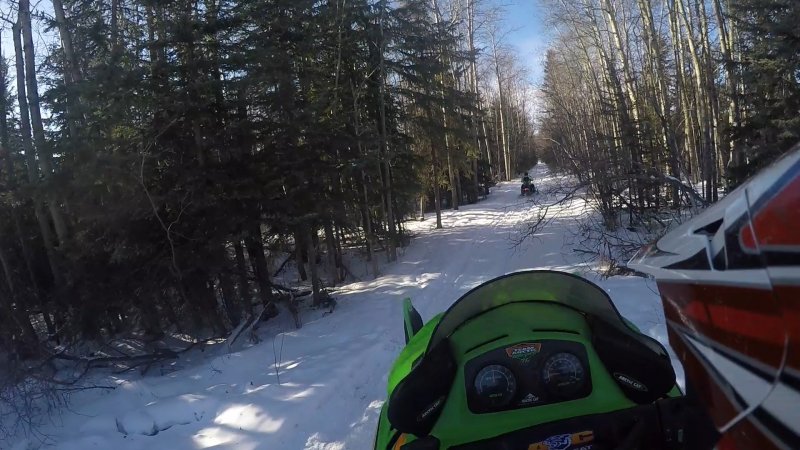 The modifications I made to the ZR worked well, and I was able to survive a long rough ride with Dean. 80 mph through a trail you have never been down would be foolish to most… To Dean it’s just a leisurely Saturday ride.

The ZR project would prove to be the only project I would complete throughout the week. The other main project I was keen on accomplishing while my brother was still in town, was to remove the head from my 450. I knew I needed to replace my valves and at the very least have the seats recut. Talking with my Dad and Brother about it, we had decided that giving the head to Mike to bring to Mongoose Machining (seeing as it is in their neck of the woods) would be a great idea. Unfortunately I put it off too long and it was too cold the night before to remove the head from the bike without damaging anything. Just removing the cap from the head I nearly stripped, or broke 2 of the bolts. I also could not for the life of me find any of the appropriate tools I would need to complete the job. (even though as I rule I have 2 sets of everything I need to do this kind of work to my bike, one in my shed tool box, and one in my travel tool kit) I had wanted to have the valve work done prior to the next annual “Epic Multi-Generational BC Dirt Bike Adventure”. Instead I will be relegated to hoping the bike makes it through, and getting the work done during early summer. (I will be having arm pump surgery performed in the early summer, so will have a good month of downtime anyways). 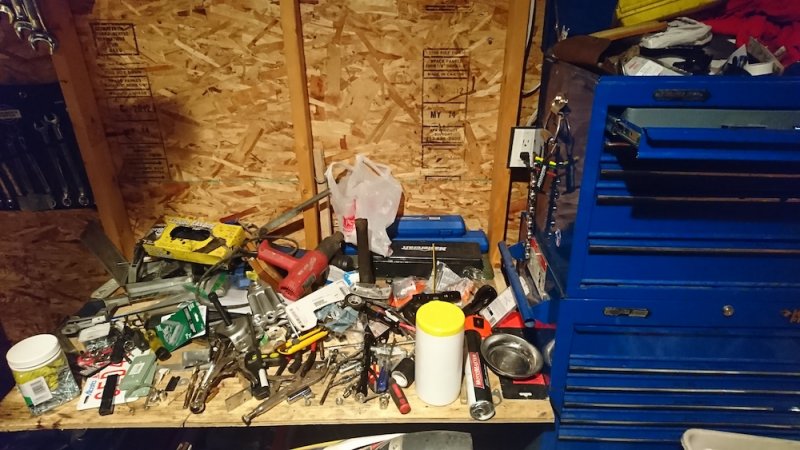 The mess that is my “Work Bench” and tool box.

My next project is where the “what makes a bike vintage” comes into play. Last summer I picked up a bike that had been gifted to my Dad. My Dad bought the bike many years ago, brought it up to Pickle Lake and sold it to Trevor Jonasson, a pilot who worked for my Uncle Bernie and was also a close friend to us Coxes. A few years back he passed away in a plane crash and last summer his girlfriend Betsy gifted it to my Dad. I picked it up, and my Dad and I decided it would be a good idea to leave it with me in Grande Prairie. I could use it as my single track bike and I would have a spare bike when family or friends would come to visit. I am still not 100 percent certain what exactly this bike is. Explanations of its rocky history differ between my Brother and my Dad.

What I know to be fact, is the bike was originally a 2001 CR 250 owned by Eric Natty of Atikokan. (Another close friend of the Coxes who unfortunately has also passed away) The next undisputed fact of this Honda's history is that it was next owned by Kyle Bates, a friend of my Brothers. We know that he left water in the radiator and over the winter it froze, and cracked the cylinder head. Here is where my Dad’s and my Brother’s recollection of past events differ.

Mike's “True Story”: My brother tells me that he and Donny Thorson fixed the CR with heavy modifications. He states that they simply modified the cylinder and head from a 1998 CR 250 to work on the 2001 crank cases. So according to him, the bottom end is the original 2001, and the top end is a 1998.

Pat's “True Story”: Just as my brother claims that “Dad has no idea what he’s talking about”, my Dad claims “Mike is full of shit”. According to my Dad, they did not in fact modify the head and cylinder from a 1998, but instead tried to fix the split cylinder and head. By his account, the bike ran a few times and then subsequently grenaded itself destroying top and bottom end. It was at that point that the engine and exhaust from a 1998 was placed into the 2001 frame. He states that he bought it off Joe Benjamin (also passed away) that he sold him both the 2001 of Eric Natty’s and the 1998 that the replacement engine came out of. (On a side note I am realizing as I write this that the bike may be cursed, as 3 out of the past 5 owners are now dead…. Hmmmm.) 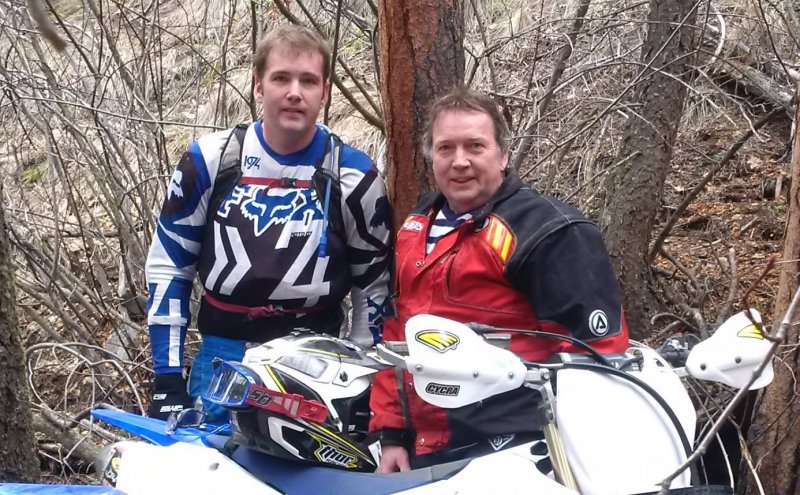 So who do I beleive? My Dad (to the right), who’s memory isn’t always “on point” or my brother (to the left), who was admittedly drunk at the time, and tends to embellish these sorts of things. (When cornered in a lie Mike likes to proclaim “Never let the truth interfere with the legend”)

Rather than foolishly choosing to believe either story as being fact, I decided to take the serial number from the engine cases to my local Honda dealership to find out once and for all what year the engine is. This time “Crazy Forgetful Old Guy” was correct over “Drunky the self proclaimed Legend”. The engine is a 1998, and so I have ordered a clutch plate & spring kit, throttle tube, levers, silencer, and a few other odds and ends. Unfortunately, I will not be able to install said parts until I can make room.

So how exactly does “vintage” fit in here? From the moment my Uncle Mike announced his vintage project, I have wanted one of my own. While looking at the Honda one day I thought to myself, “could I call this bike Vintage?” The dictionary was of no help, as in the strict definition really only applies to wine. So instead I started to search “how old must a vehicle be to be considered Vintage?” I found answers to vary greatly, but I most commonly found the following two things.

So considering that the body is 16 years old, but the engine is 19 years old, we can maybe call it close enough. As for the second classification, I found that 1998-2001 are very significant years for the CR 250. It is said that those were the last “good years” for the engine of the CR 250. In 2002 an electronic power valve and a few other poor modifications were made that marked the beginning of the end for the CR 250. There are many companies and people in general, who specialize in putting 2 stroke engines from bikes no longer in production, into modern bodies. In all my research, I found that for Honda 2 stroke project, the desired year was always between 1998-2001.  I also found that in 2003 Honda’s President, Takeo Fuck-You… I mean Fukui, announced that Honda was going to start immediately phasing out 2 stroke engines. They continued to make the 250 for 4 years after that, 2007 being the last year. It’s worth noting that over those 4 years the refinements made to the frame and suspension were great improvements. Unfortunately most people found the engine was never quite as good after 2001. 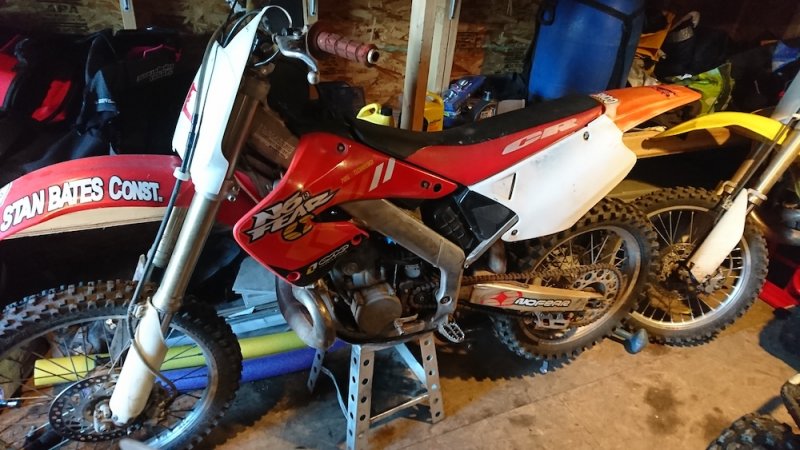 So I’m going to go ahead and claim this to be a “Vintage” bike.

After all of that, I still have 2 more projects to complete. The first project being the wife’s quad, a 2006 Raptor 350. I don’t have much to do to it. Thankfully, I need only to instal the new silencer with spark arrestor that is on order and put new tires on the front. (A job I should have done 2 seasons ago) The final project, at least for now, is on my friend Jose’s 2007 RM 250. One of the front forks and the rear shock are leaking. The fork I may be able to use a “seal saver” tool on, but the rear has already had that trick done to it and is still leaking. So I will be replacing one seal for sure, perhaps two.

In hindsight, if I had organized my shed better, and built the gate I have been talking about building for the last year before winter hit, I would not be in this position now. But, in all honesty, I will probably be in the same type of scenario again by this time next year.