Our arrival into Puerto Natales came at a reasonable time considering the distance we had travelled and when compared to a couple of the previous days-with-struggles. Our hotel was on a gulf shoreline that looked more like a lake than the ocean. After we had dinner and then gathered in the hotel's lounge we bided our time reminiscing the day's events. Hamilton put some effort into recruiting people for a morning swim in the ocean. Surprisingly, there were several takers, myself included but come morning my enthusiasm lapsed. I am okay with my choice though, I have done quite a bit of cold-water swimming including a dip in the river on Christmas Eve two years ago. Hamilton is pretty serious about his polar-dips. These are not an in-and-out affair, he spends some serious time in the water and is a fountain of knowledge on the subject. Many people seem to believe that hyperthermia will set in in about 90 seconds or so, but reality is a much larger number and Hamilton clearly demonstrated that fact. 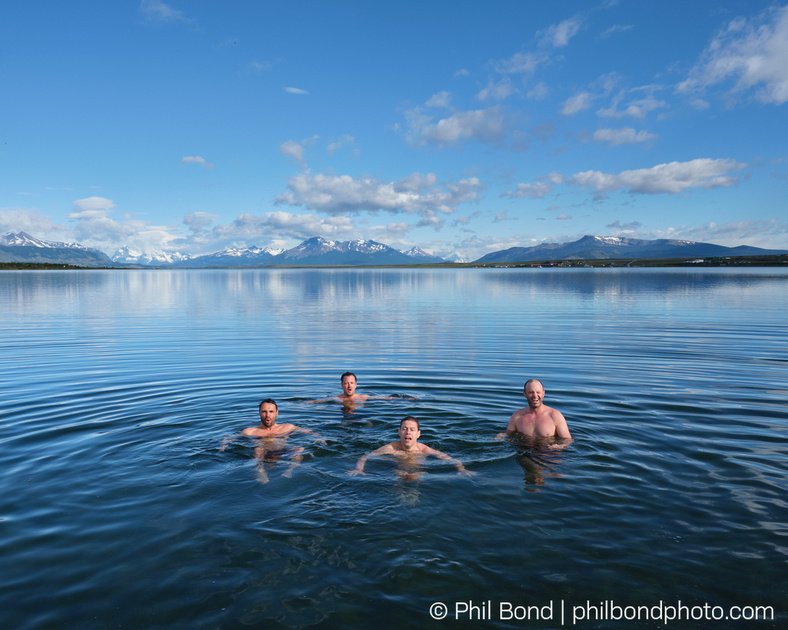 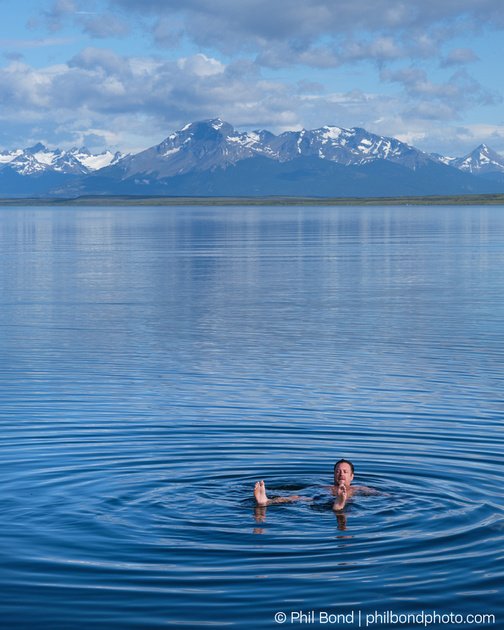 Hamilton was in the water about 15 minutes longer than anybody else. Photo by Phil Bond.

For our adventure on this day, we were doing a day-trip to Torres del Paine National Park. This is a large park, about 181,000 hectares. For my friends familiar with Quetico Park (near where I grew up), Torres del Paine is about 1/3 the size, which makes it pretty darn big. The scenery is dramatic, with the large rugged mountains with the famous horns, the glaciers and glacier lakes.

The track for the day, if you cannot see the map, try clicking here. 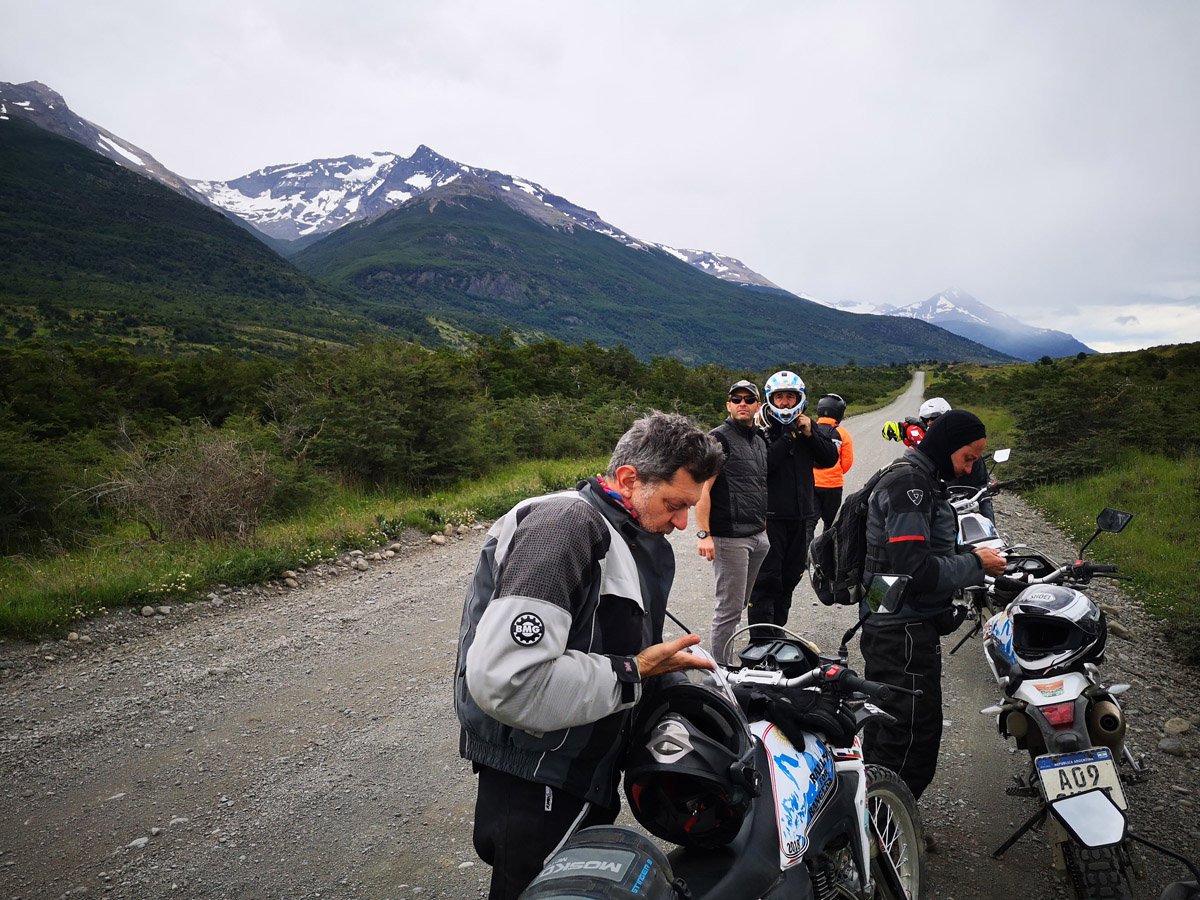 Elias cleaning his shield. The weather was not in our favour on this day with a low ceiling and rain in the park. 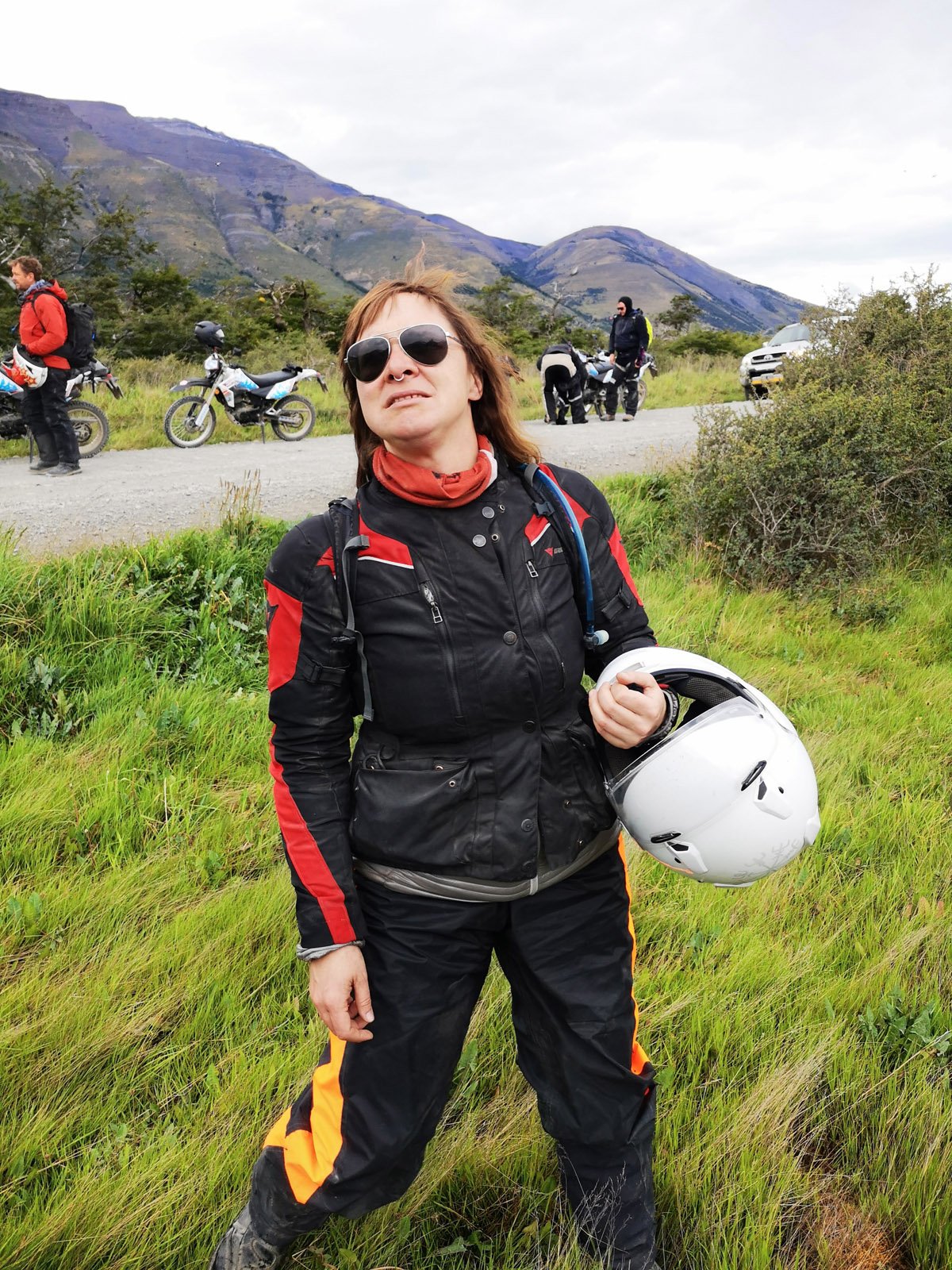 Arlette coming over to take a picture of me while we wait for the media crew to set up for some pictures. 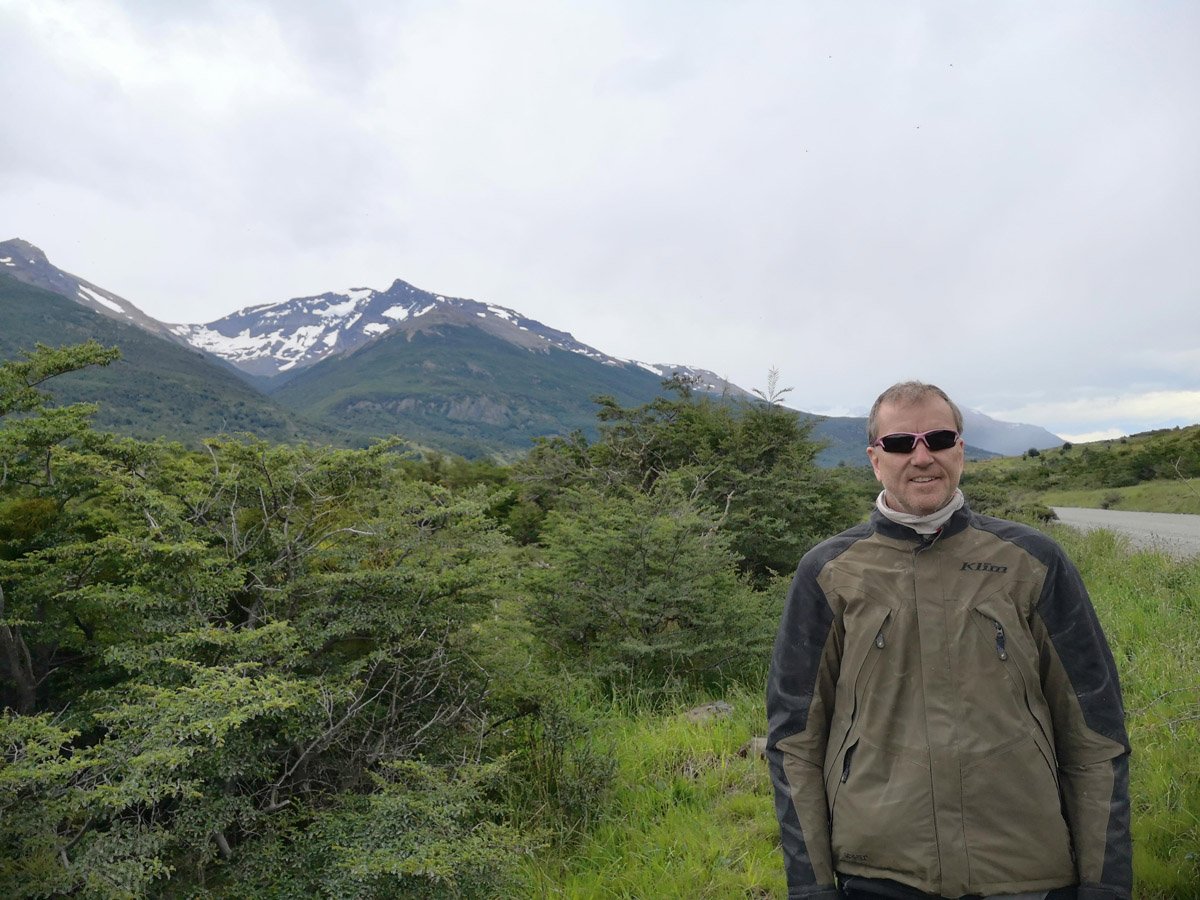 The picture I had Arlette take. 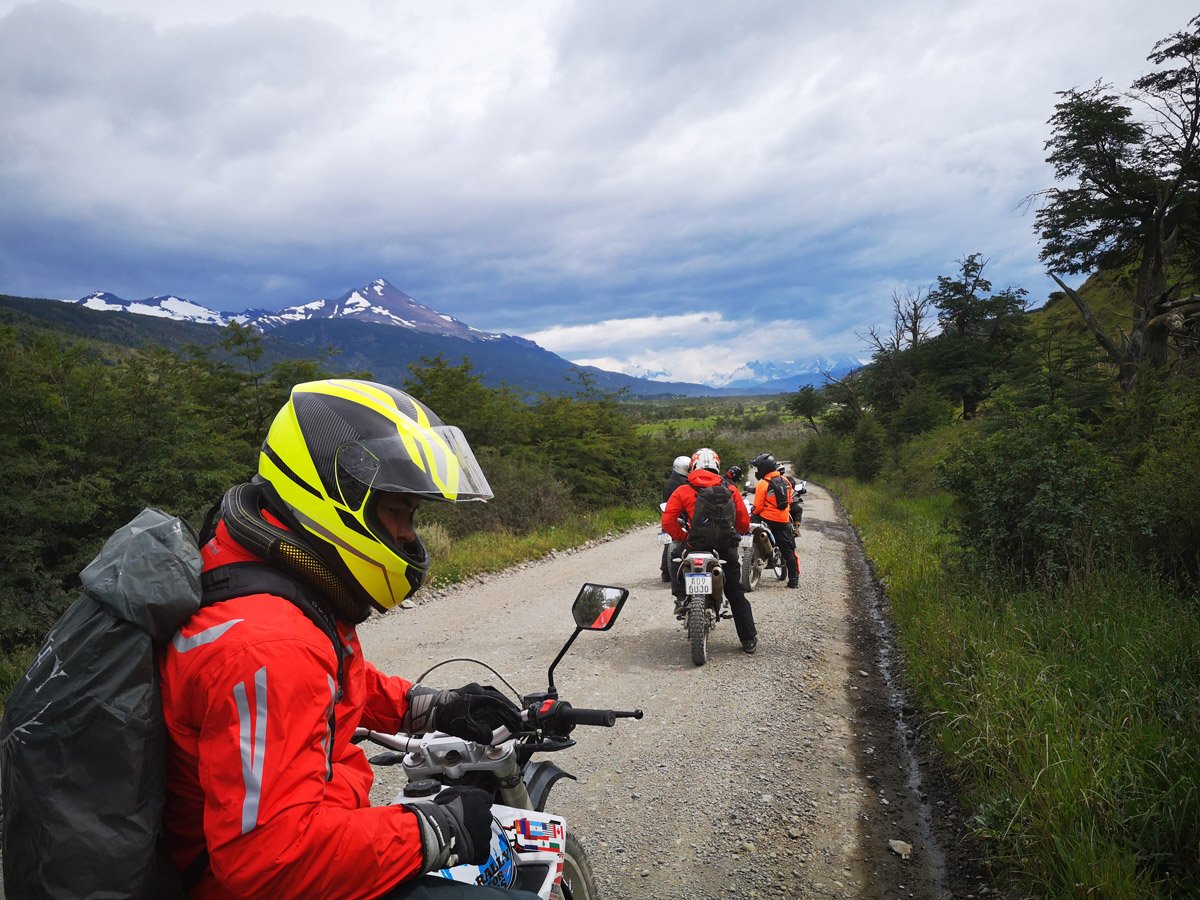 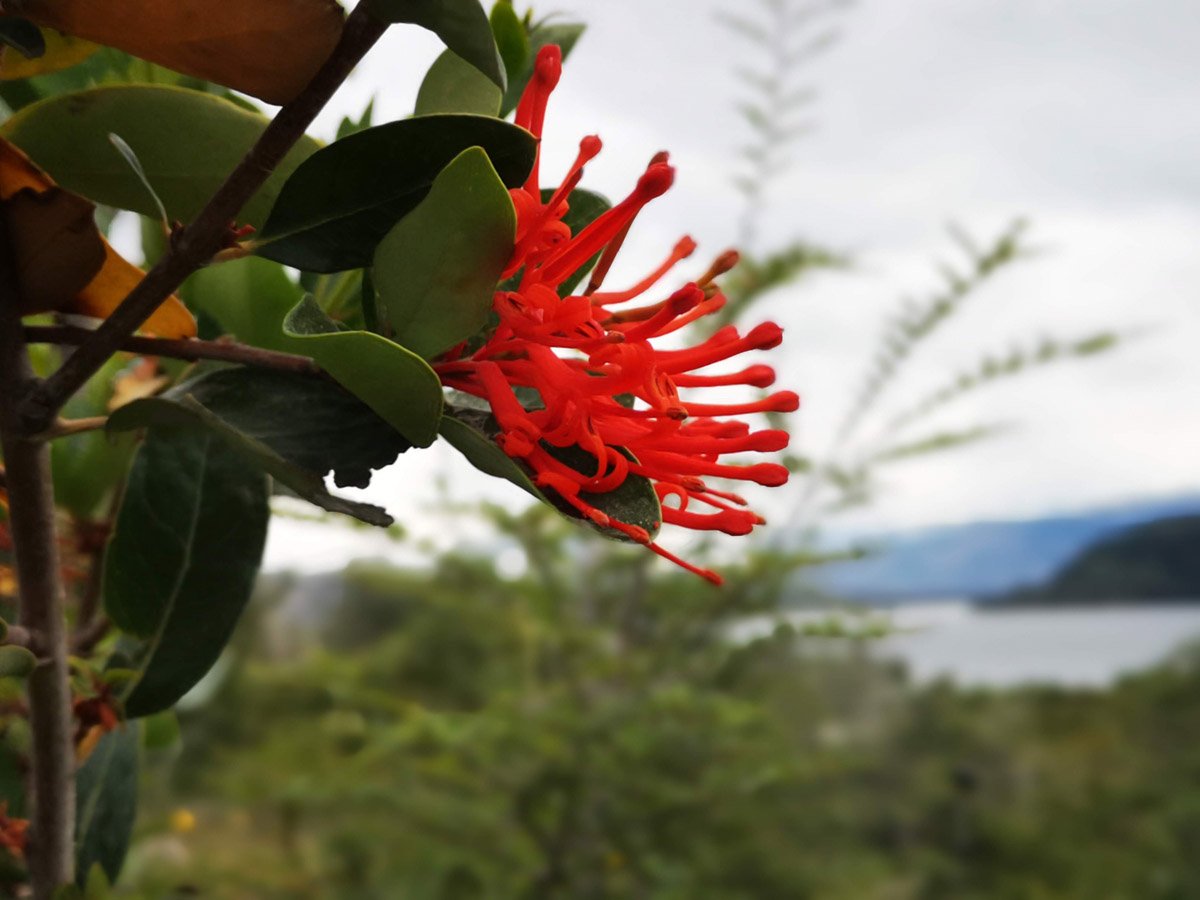 Springtime in Patagonia and the trees are blooming. 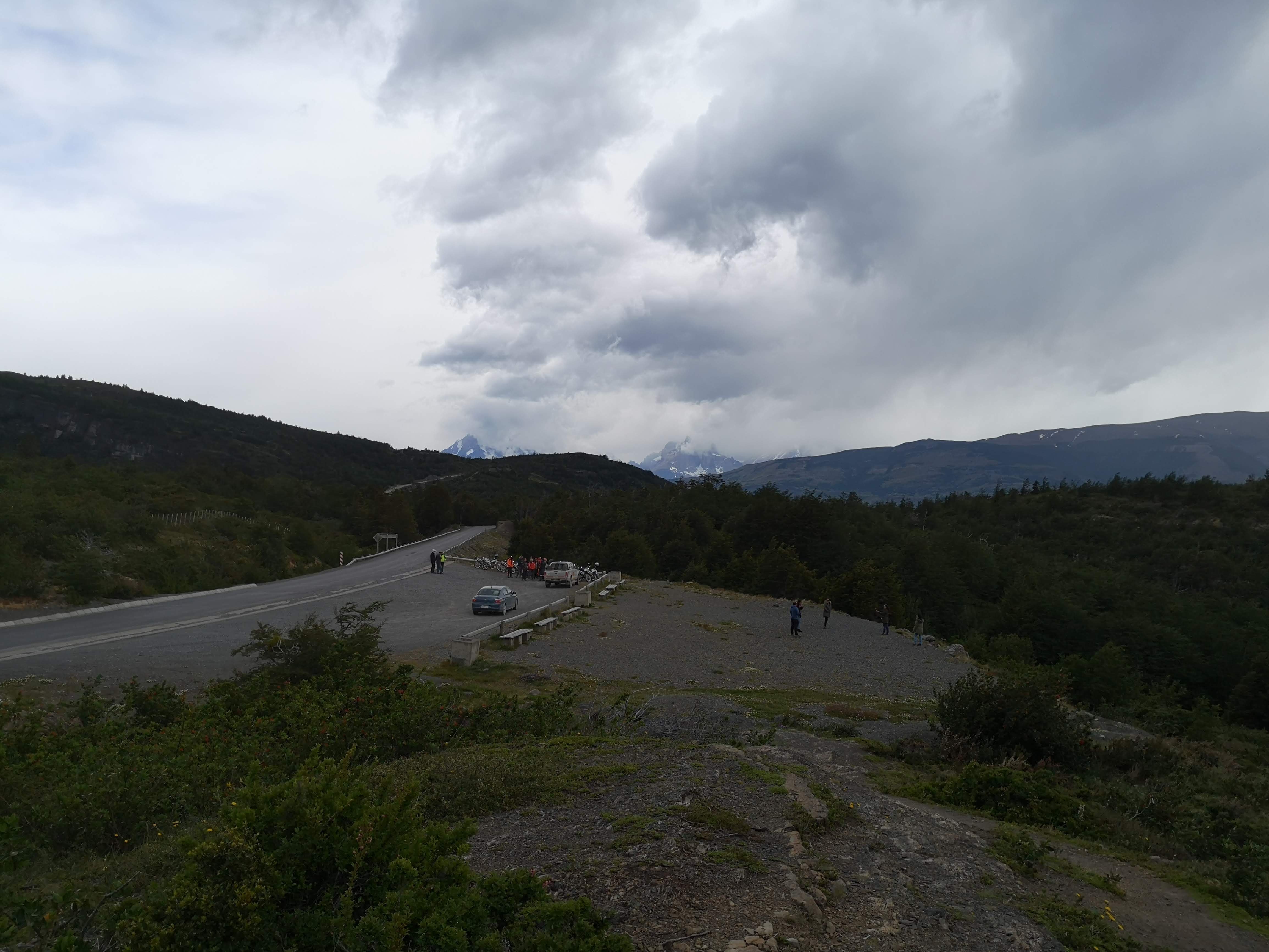 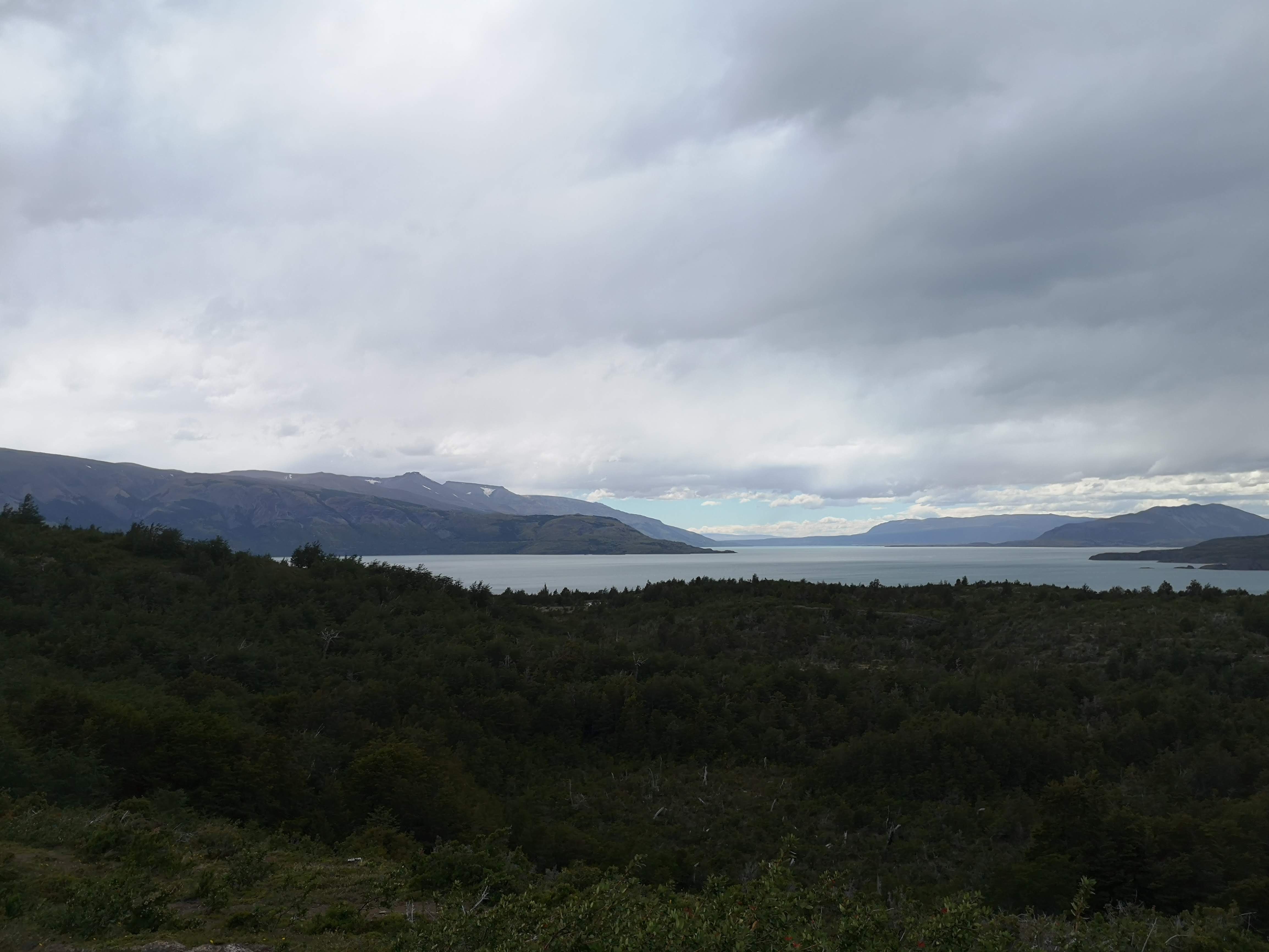 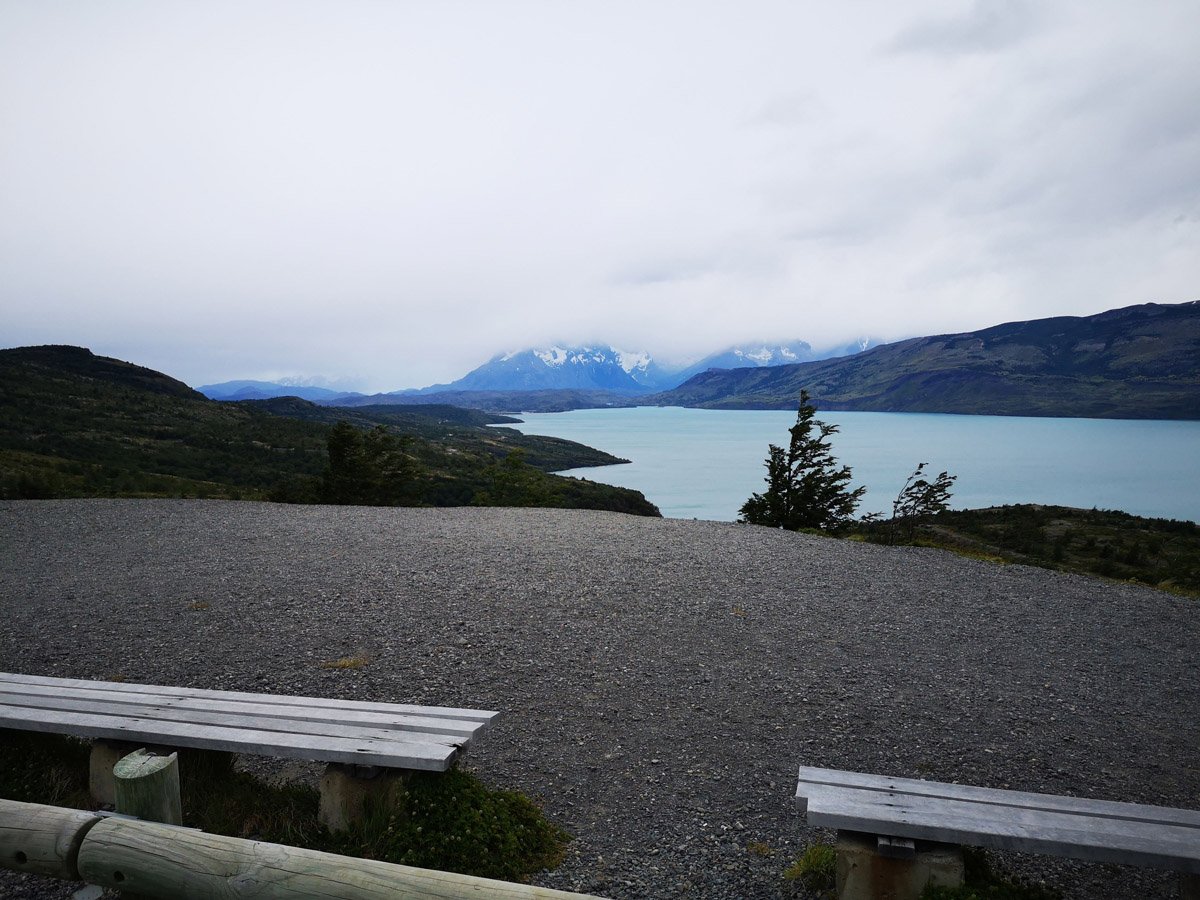 The mountain that is hidden in the clouds will show tomorrow in full glory.

Last December I got an email from my friend Dave O'Malley who found the website for Rally for Rangers and thought I would be a good candidate for the rally. I applied to be a rider and when I was accepted, Dave was the first person I told. He was more exited than I was and he immediately set to work making graphics that I used to help with my fundraising efforts. Dave is graphic designer who has been producing top quality creative services for decades with his company Aero Graphics. Dave was also first to donate money and also relentlessly nagged his friends to donate too. Without Dave, I would not have made this trip. Dave went so far as to put me in Torres del Paine a year ahead of time.

Here I am riding my vintage RM250 on a trail with the famous mountains in the background. Dave even put some dust in behind... even the season is correct as the trees are in bloom. 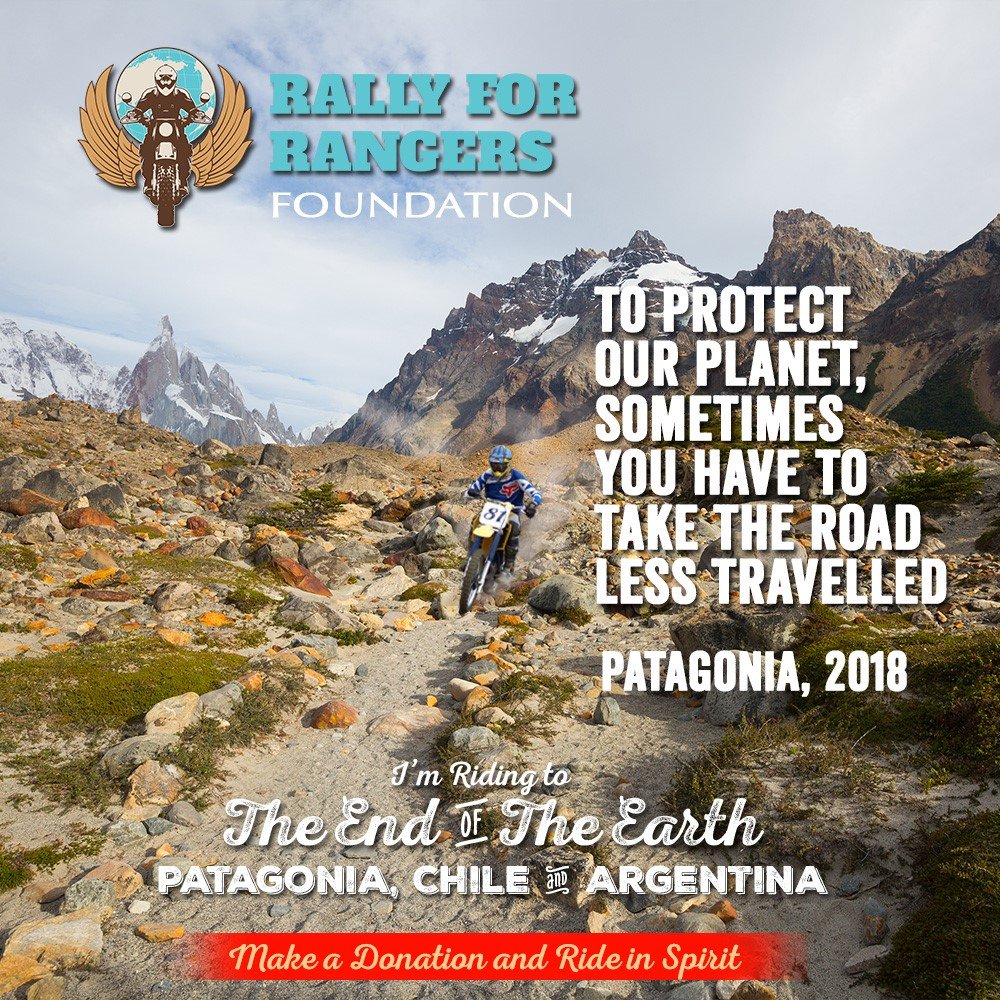 More of Dave's artwork, this one you can see the horns of Torres del Paine in the background.

While riding single-track in Torres del Paine is not what the rally is about, nor is it allowed, it certainly made for a great visual so I decided to stage a couple shots for Dave. He put me here with PhotoShop and he put me here in person. 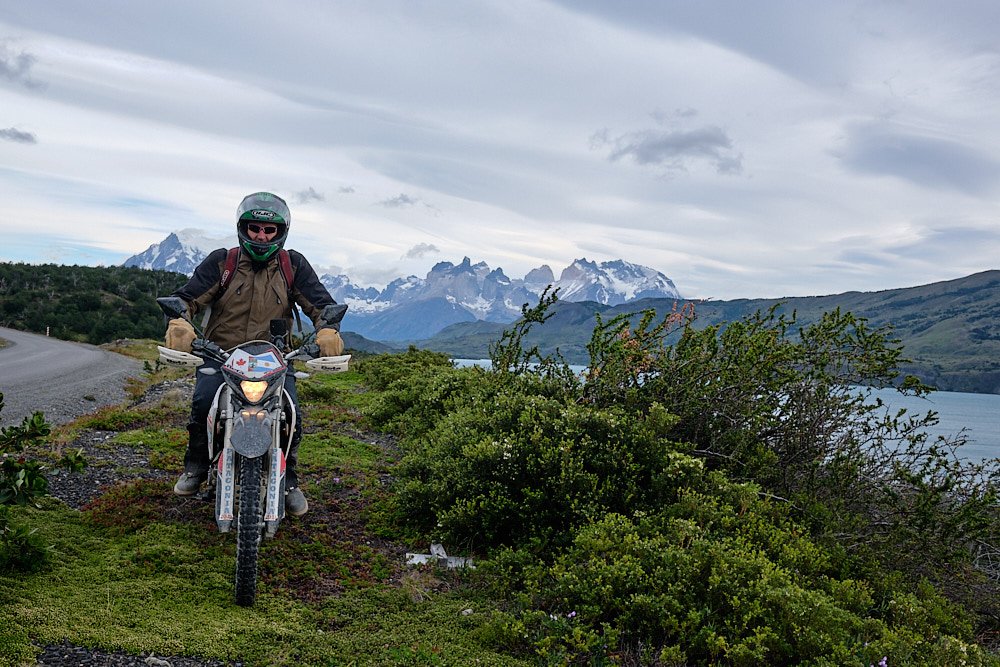 This photo was taken by Phil Bond at my request at a roadside lookout. 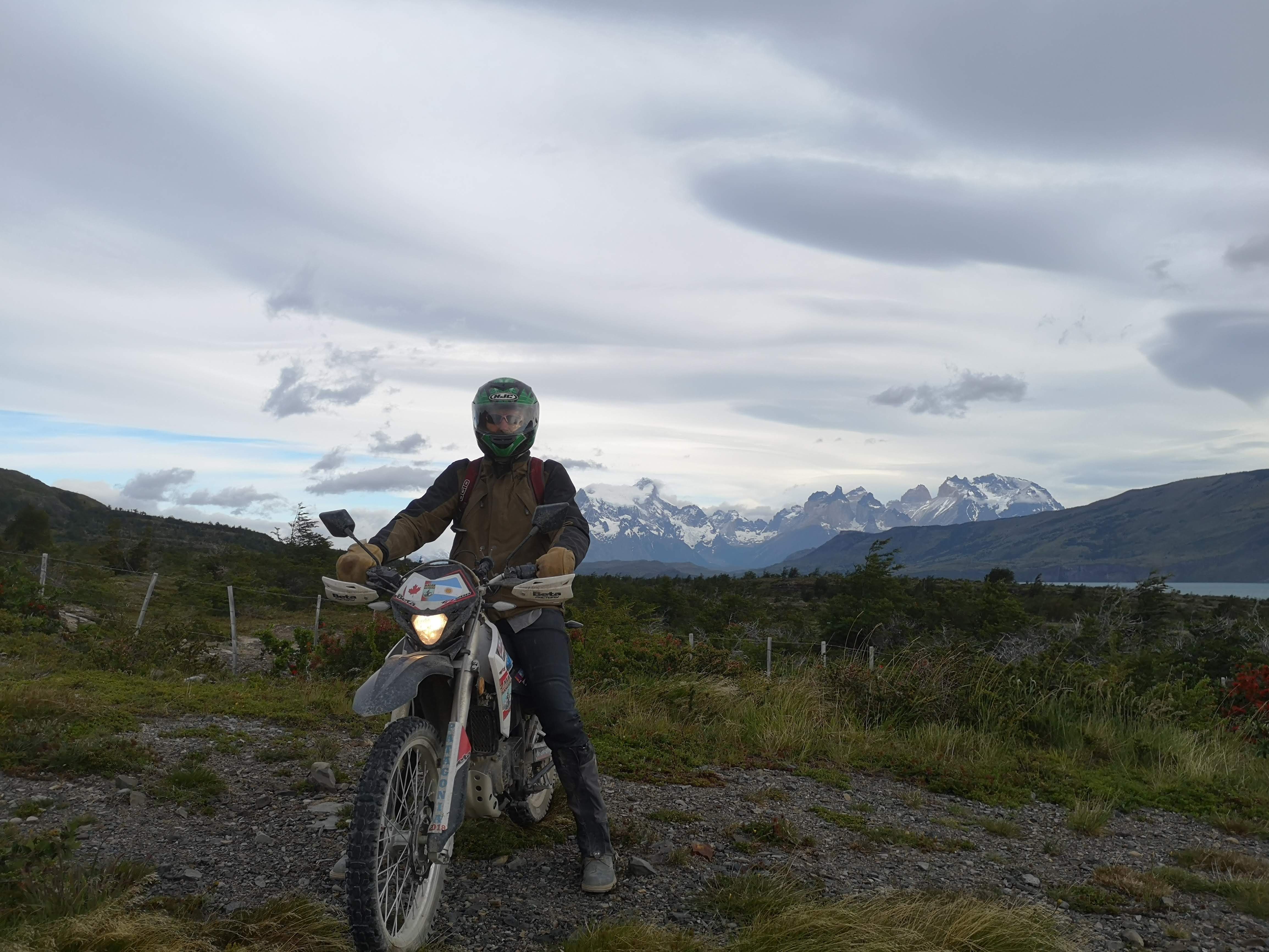 This photo was taken with my phone by Dylan Wineland who really knows how to line up a shot. 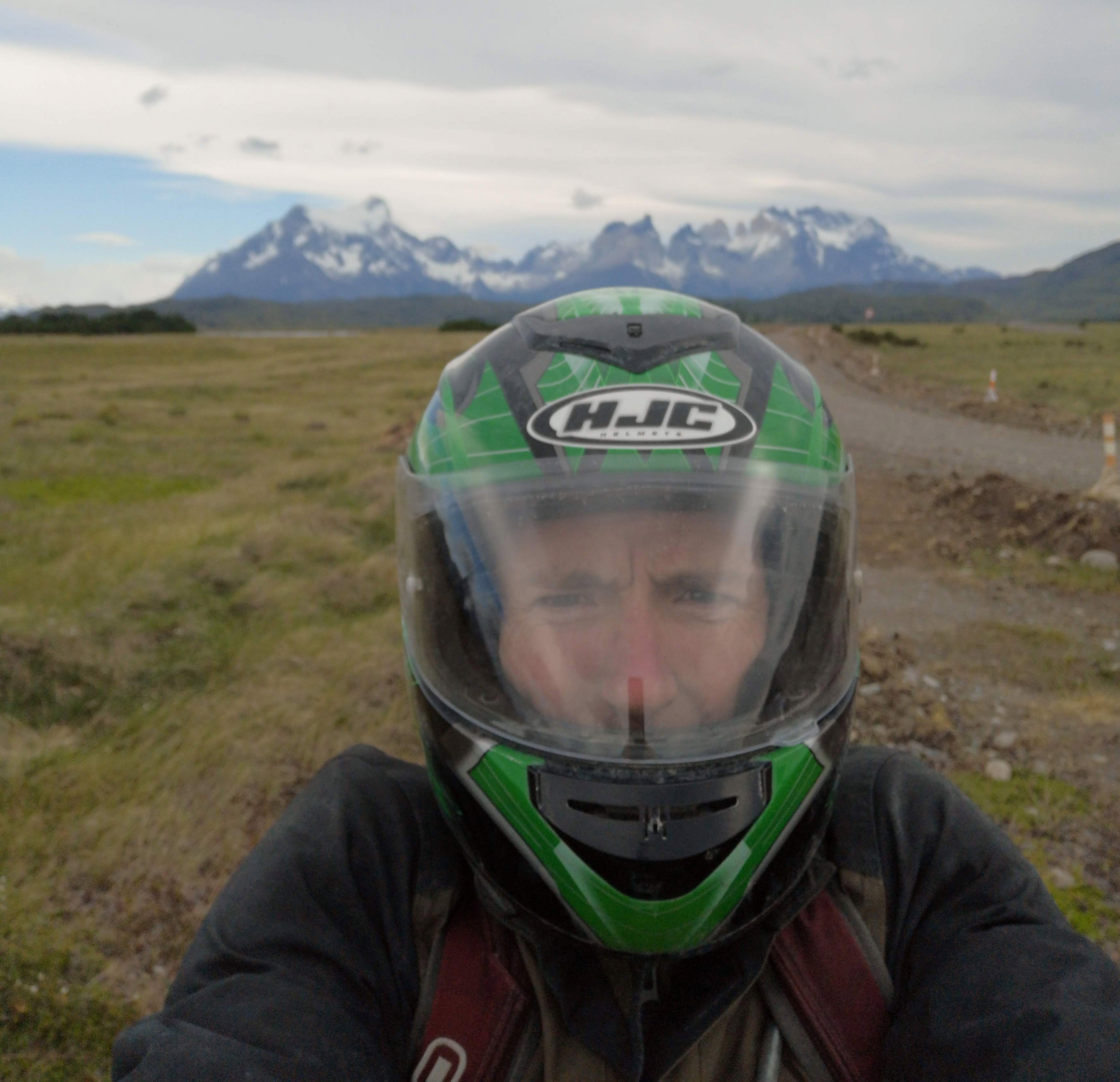 A selfie from the perspective of Dave's photoshopped image.

The above three photos were all taken the following day when the clouds had lifted. I had tried to get this shot on our day trip to the park, but the weather was not agreeable. 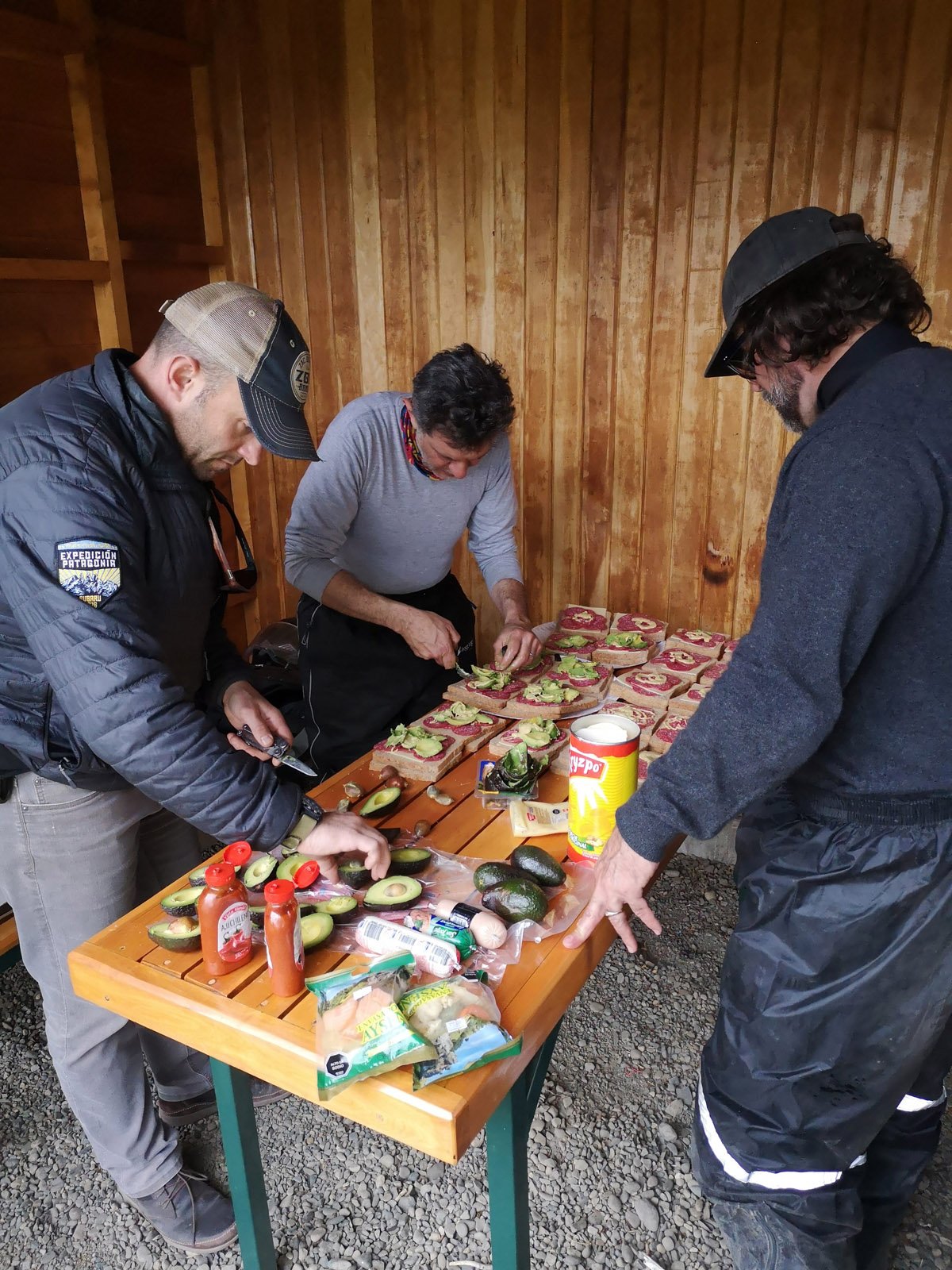 Elias is a Chef in San Francisco and volunteered to make lunch for the whole group at the park. Chuck and Alex helping with preparations. We had great food in Patagonia, but we did have a few misses in the lunch department. Elias certainly fed us well when he volunteered. 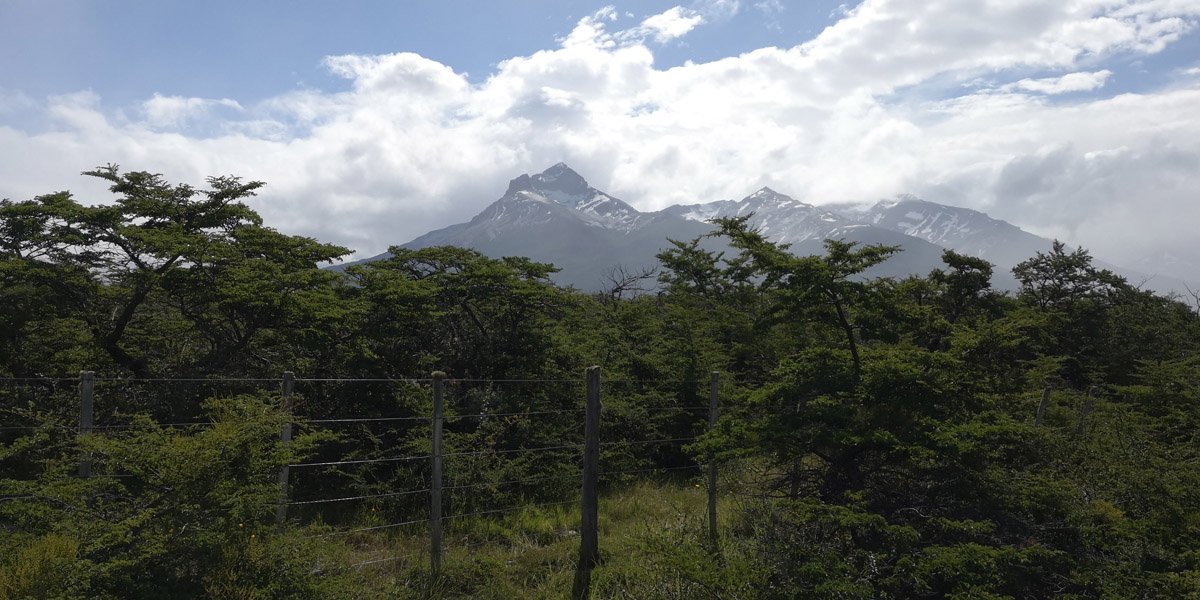 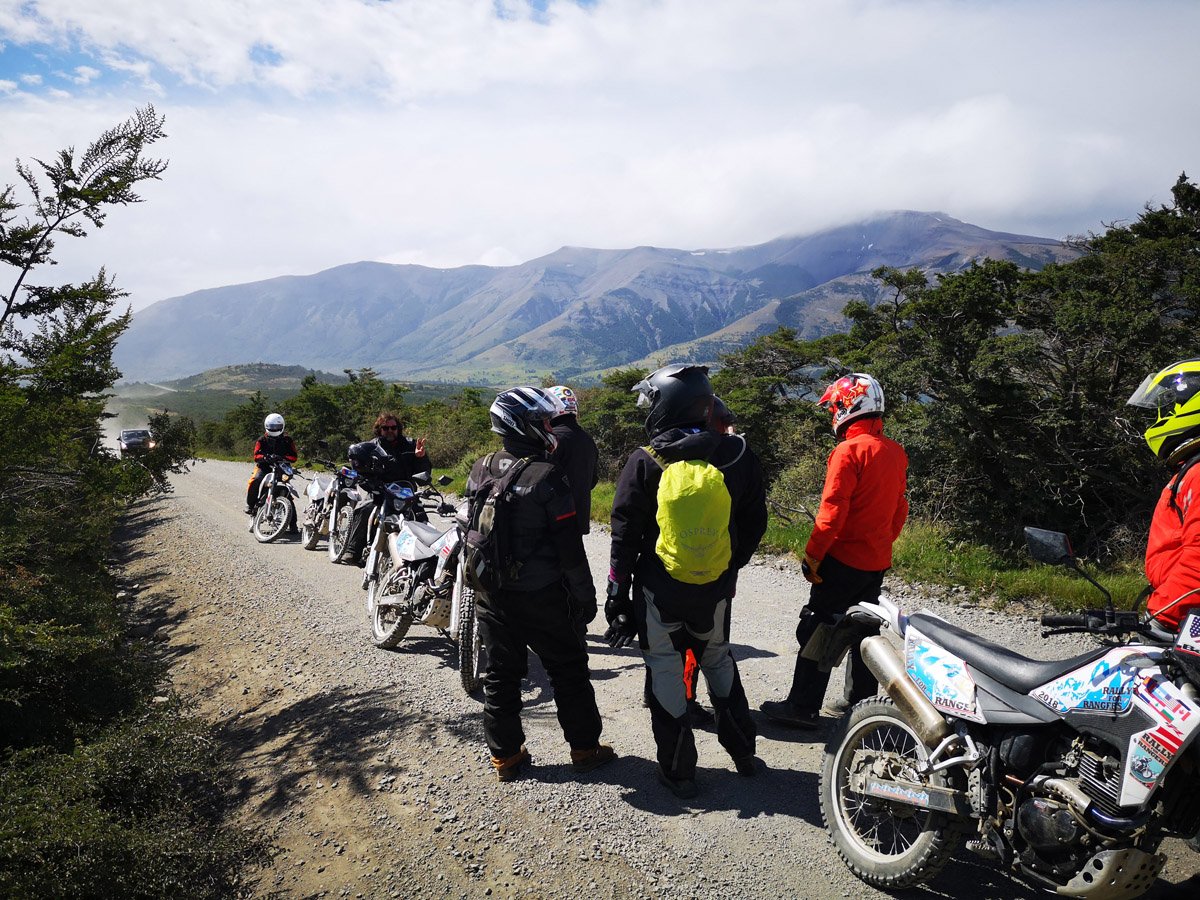 A couple more photos from the way out. 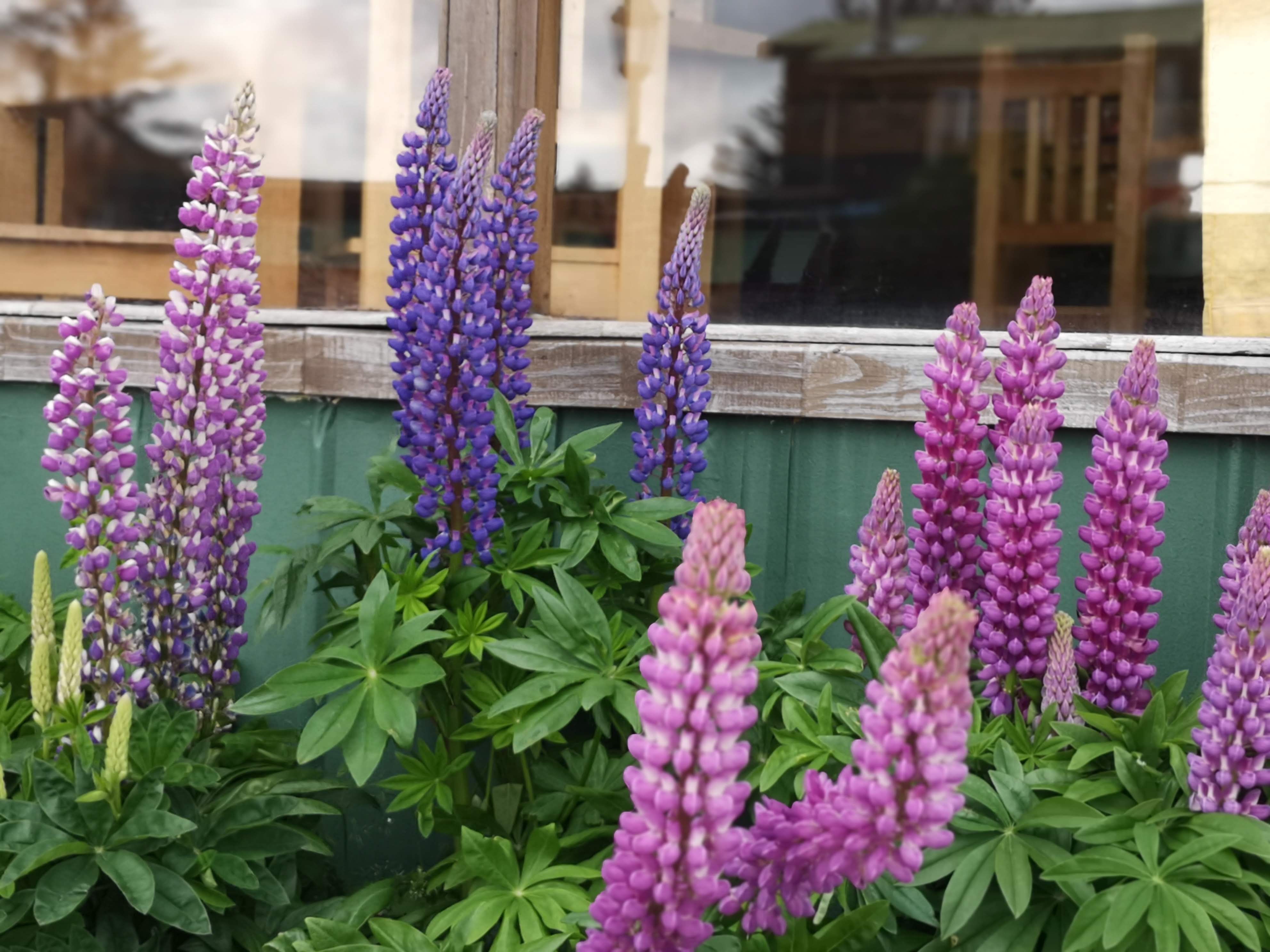 Lupins are not indigenous to these parts, but they are common. 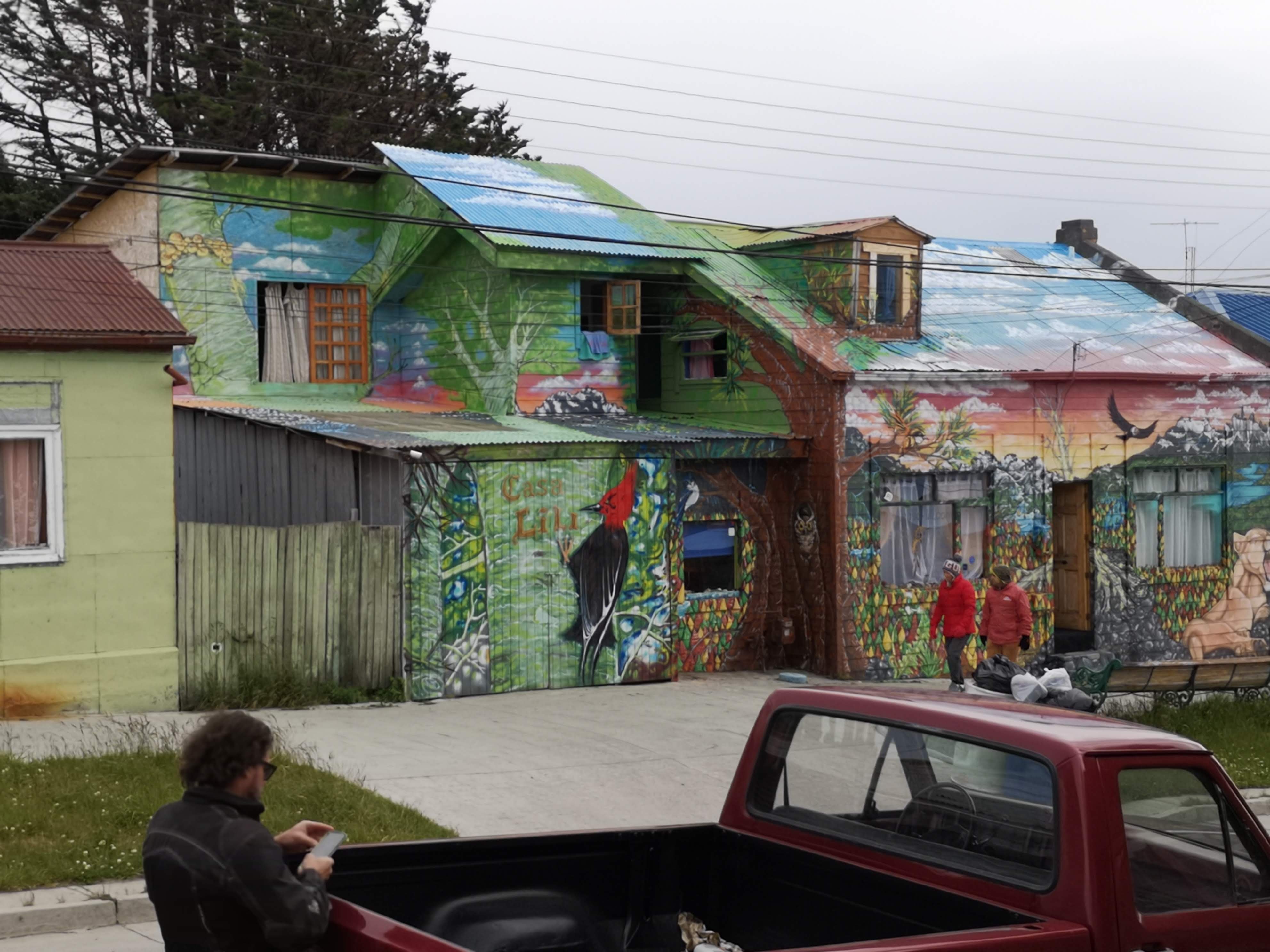 Entertaining the tourists with a unique paint job. 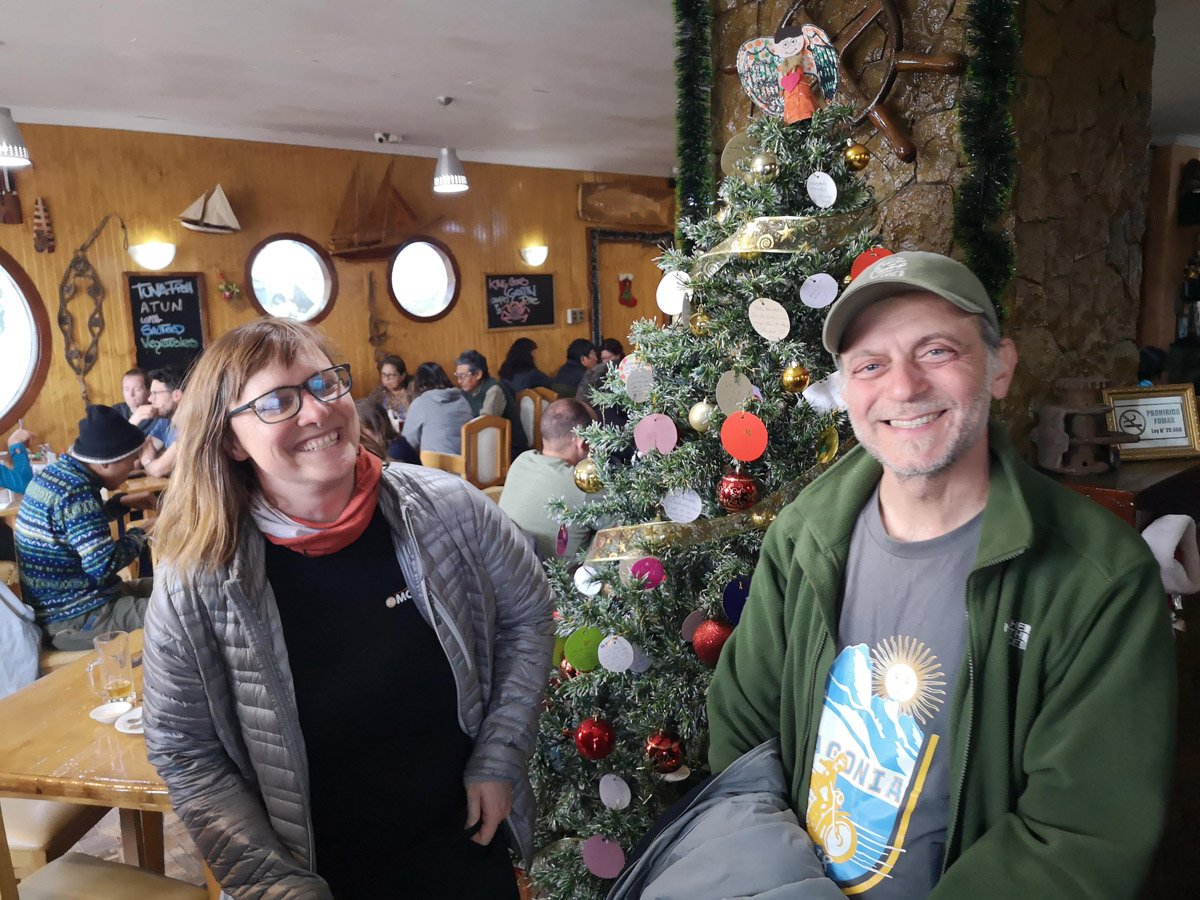 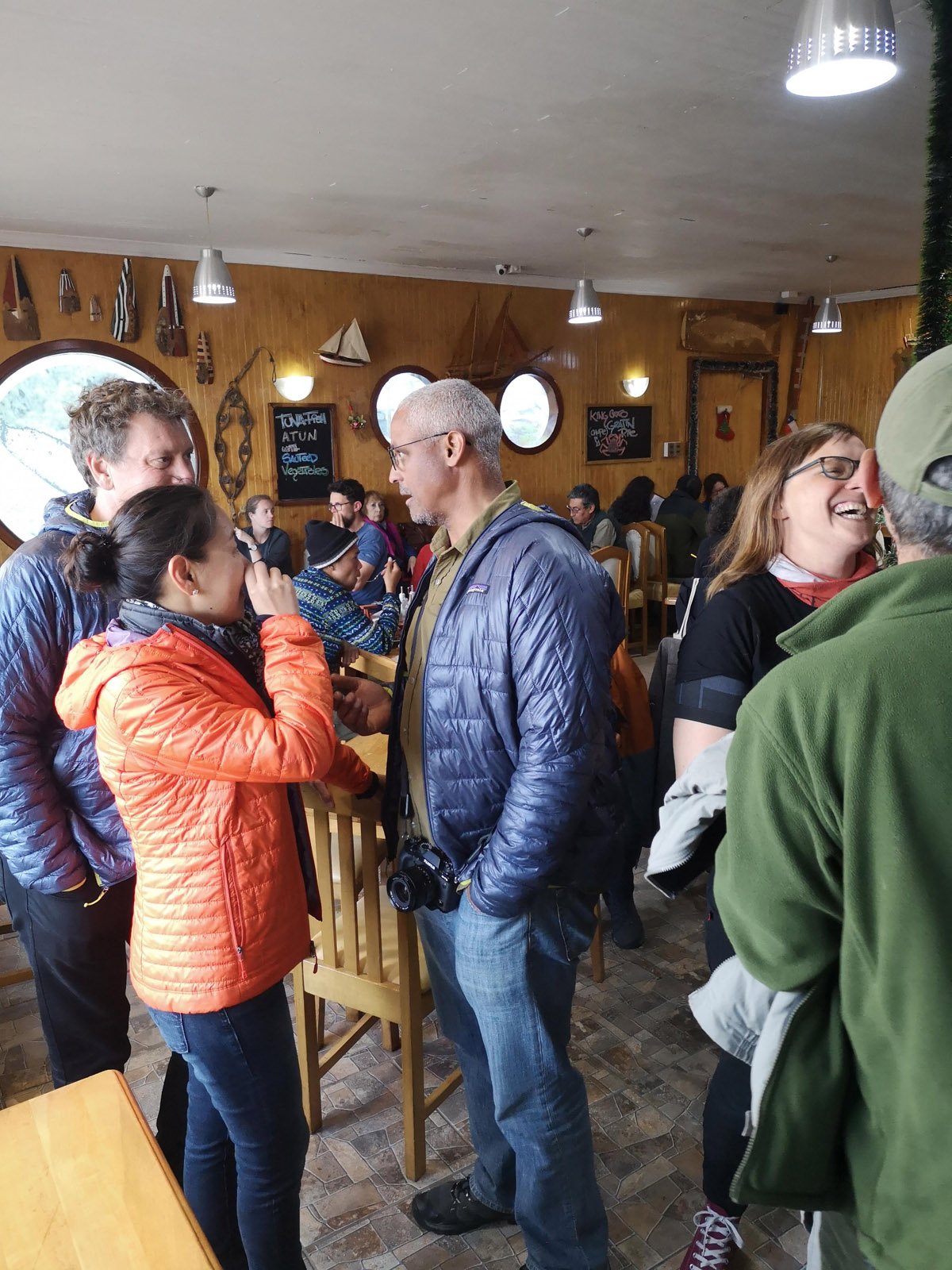 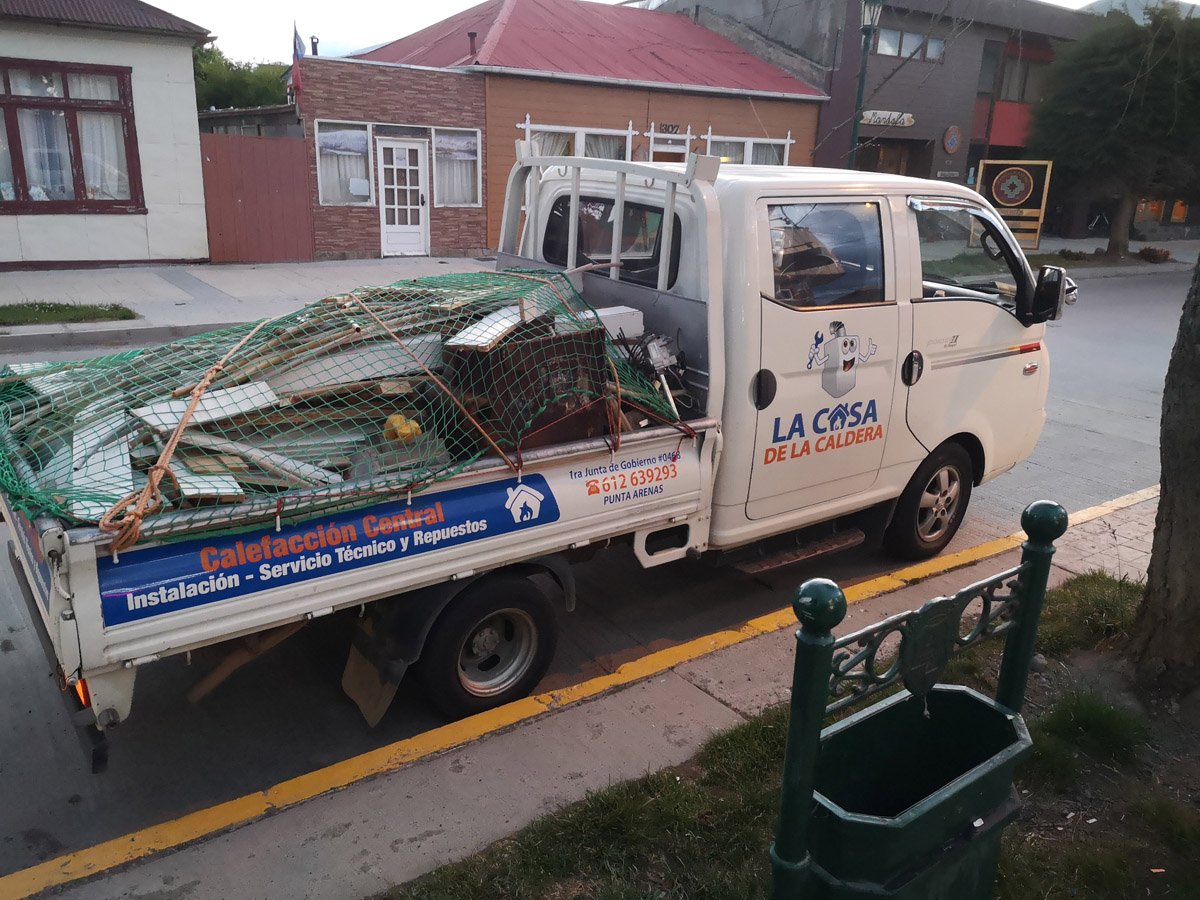 You see a lot of these pickup trucks in Patagonia. Most are made by Hyundai. 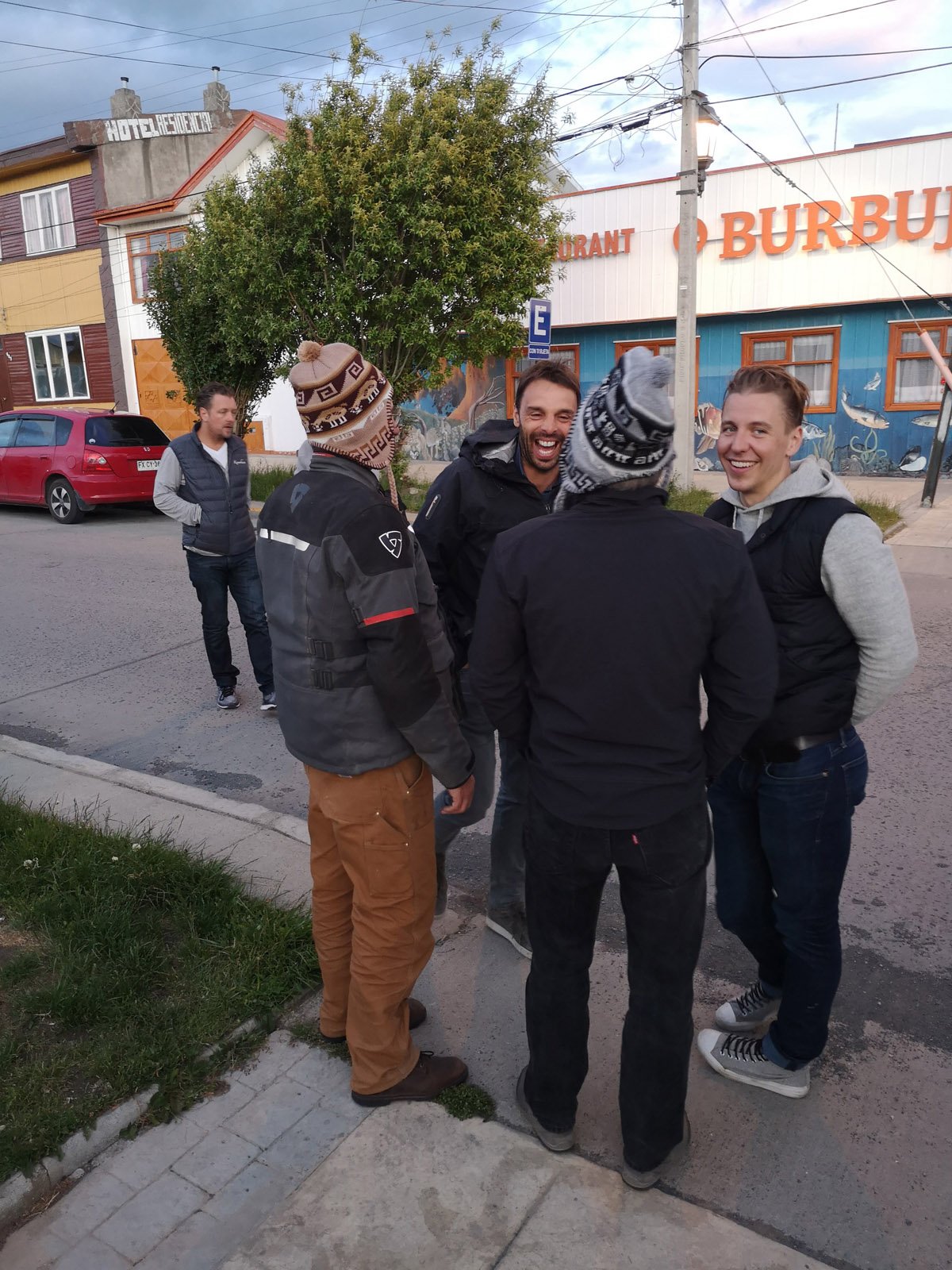 There was no shortage of laughter. 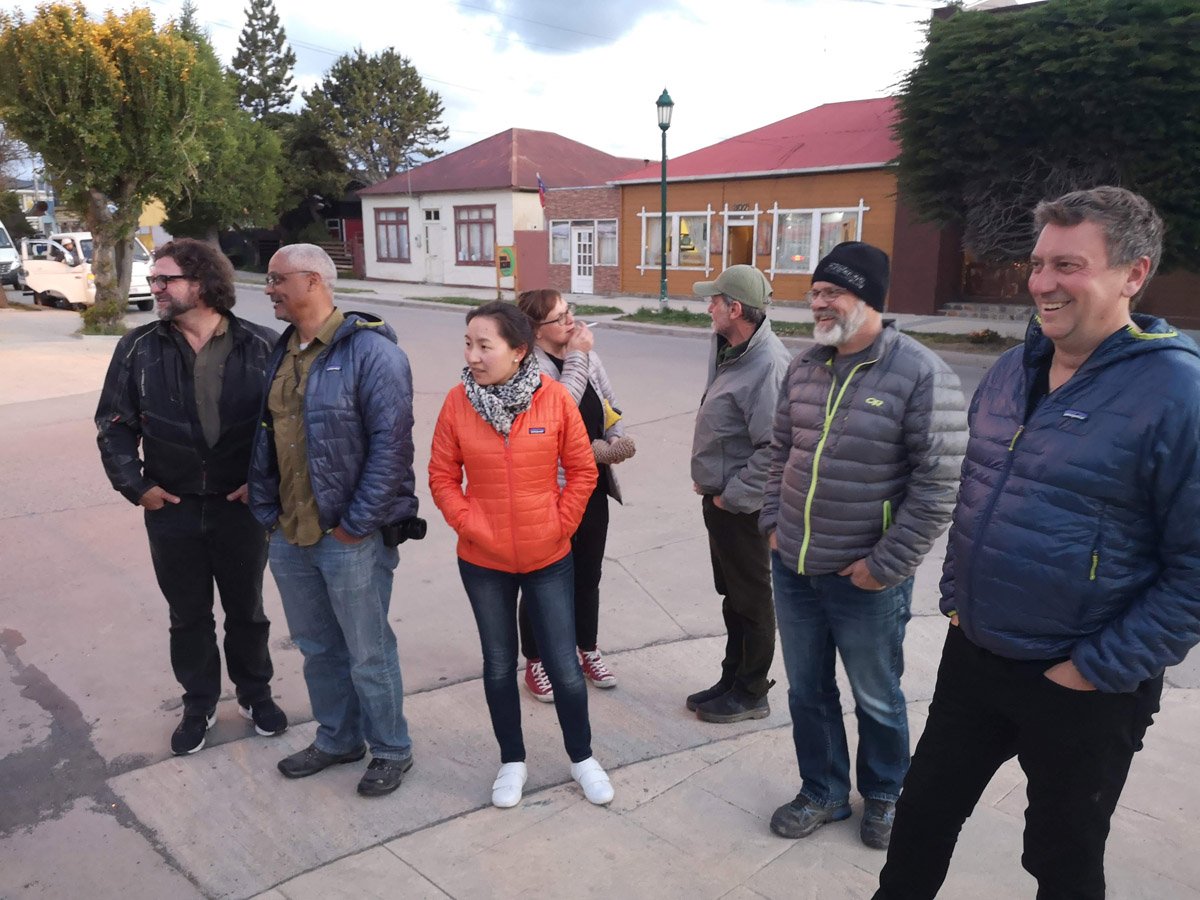 Not sure what it is that we are finding so entertaining. Perhaps Kurt and Mike in their tourist toques talking with Robert and Steven in the photo above. 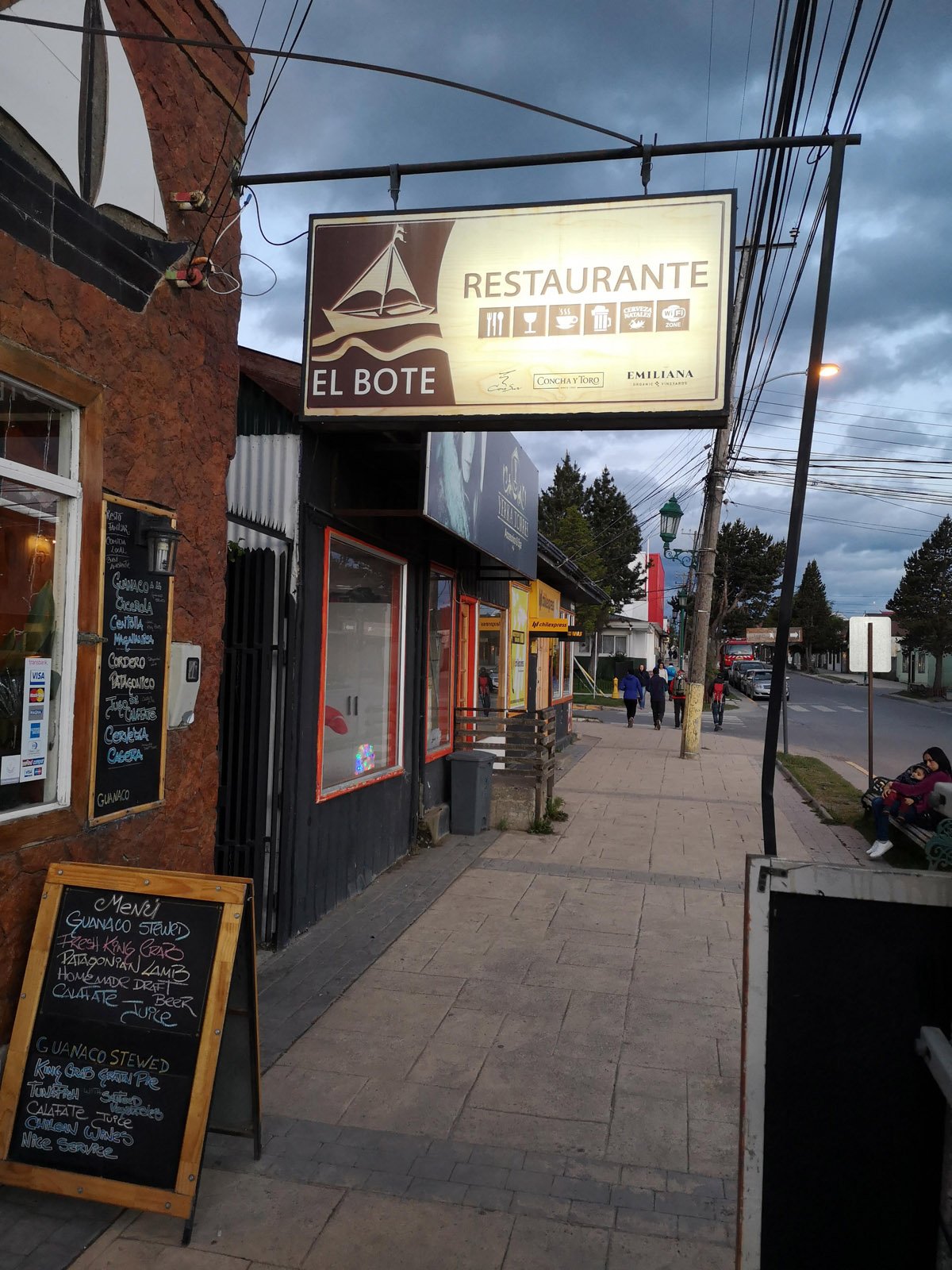 Eat here! Next time you find yourself in Puerto Natales, you owe it to yourself to eat here.

It was a well deserved easy day for the crew and despite the rain in the park it was enjoyable. The famous horns on Torres del Paine were stuck in the clouds, but the scenery was still magnificent. I got my nose out of joint for a little while over some minor issues but quickly remembered where we were and what we were doing there and corrected my attitude and made amends.

All photos from that day