The first day of the rally started with a minor delay. Wesley found out, just as we were swinging our legs over the bikes, that his missing luggage had been finally delivered to the Rio Gallagos Airport. It didn't take too long, enough time for another coffee at the Hotel Santa Cruz. I started the day wondering if I would need a base-layer under my riding pants as the temperature seemed alright. A half hour into the ride I was very happy I opted for the added layer. We pulled over to the side of the road and several of us unpacked the warmer gear. I put away my gloves and pulled out the mitts and put the gaitors on to block the wind that was going up my pant-leg.

After that first short stop, we were nearly to the Chilean border for our first of four border crossings. Border crossings are a necessary hassle. You cannot get to Ushuaia, Argentia without going through Chile. Roberto, our guide, had the border crossing process all figured out and made it as painless as possible. We check into Chile, we check out of Argentina, we go through customs and our passports are all stamped along with papers that you have to carry with you until the end.

An hour or so later we arrive at our first ferry crossing. This is a ferry that takes us across the Straight of Magellan to Tierra del Fuego. I always enjoy a ferry ride and this one was great. It was here that I began to realize just how windy it is here in Patagonia. We saw some wildlife, notably some black and white dolphins and I saw a penguin dive through the bow-wave.

Once on the other side, we made our way to our lunch stop in Cerro Sombrero at a hotel where the food was waiting and was pretty a decent offering. A few more hours of riding and we made it to Russfin and the day was coming quickly to an end. It was a very long day and typical of what we would experience in the days to come.

This is the track for the day. We put on a lot of miles. If you cannot see the map, try clicking here to open it. 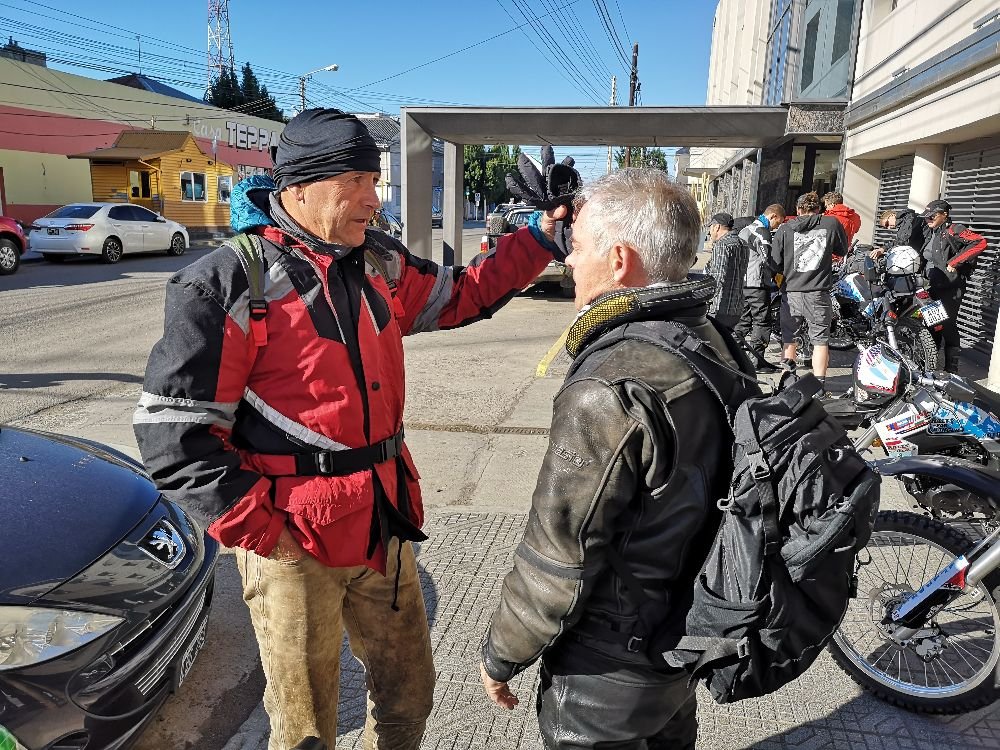 Kurt (right) talking with a Park Ranger who spent some time with us at our departure. Both men were an honour to spend time with. 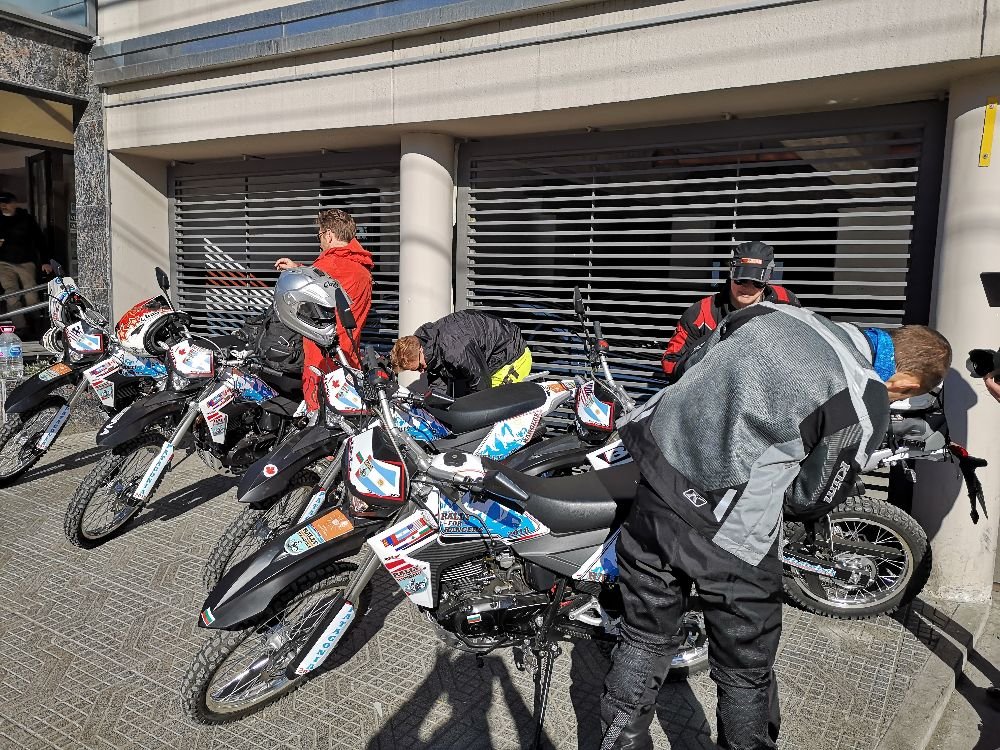 At the Hotel Santa Cruz in Rio Gallagos, getting ready to leave. 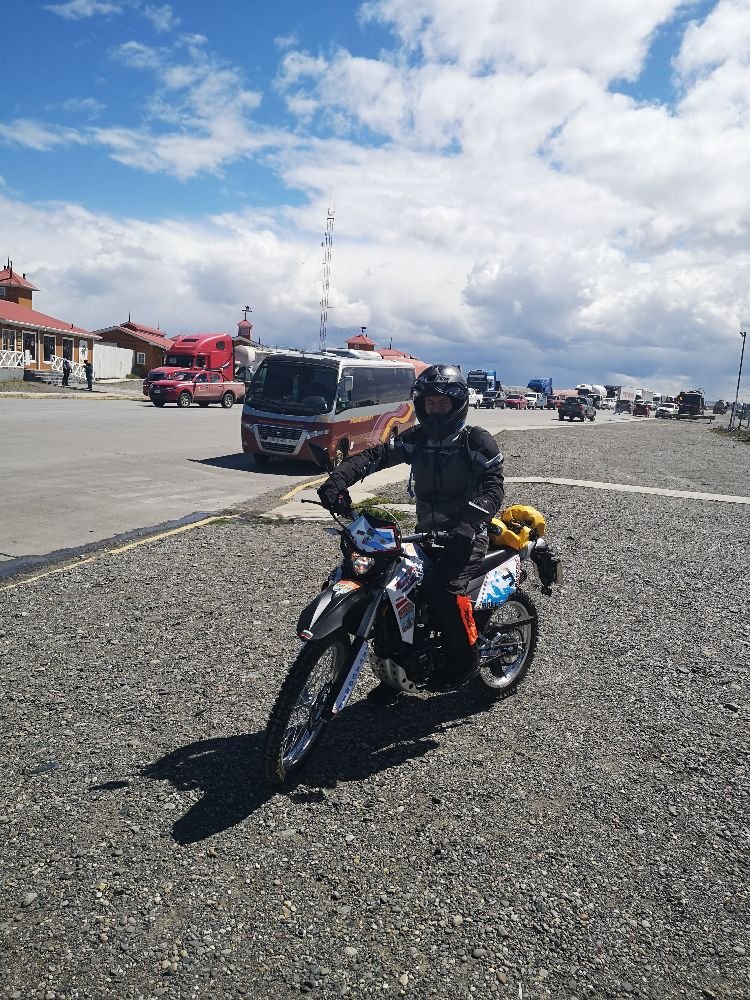 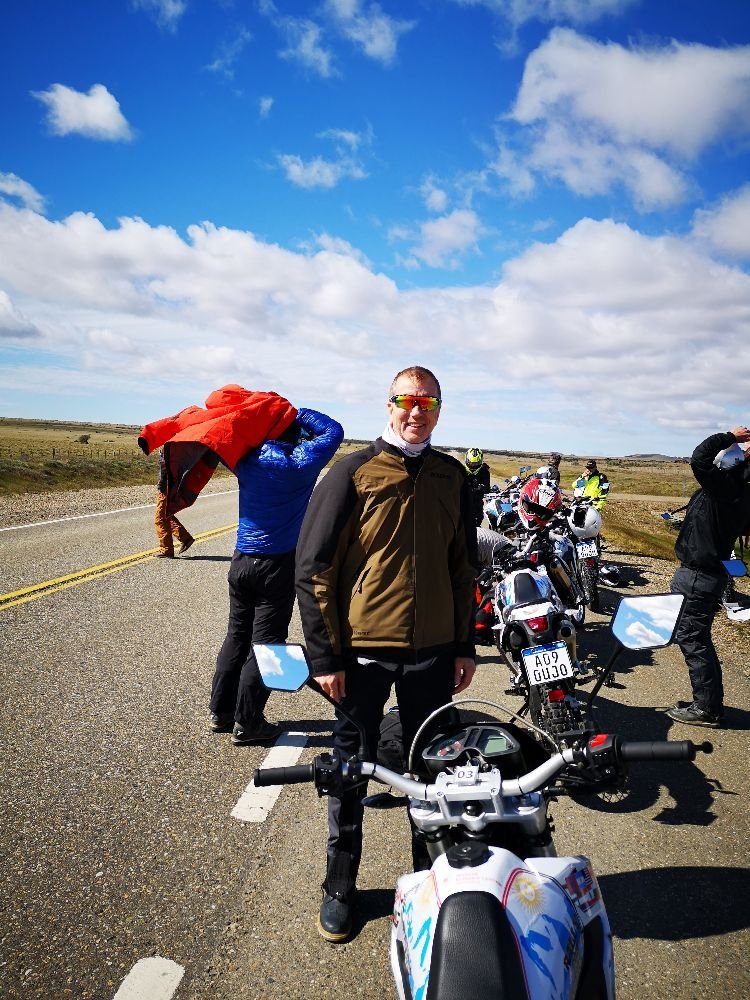 After a half hour we stopped and added some additional layers of clothing. brrrrr 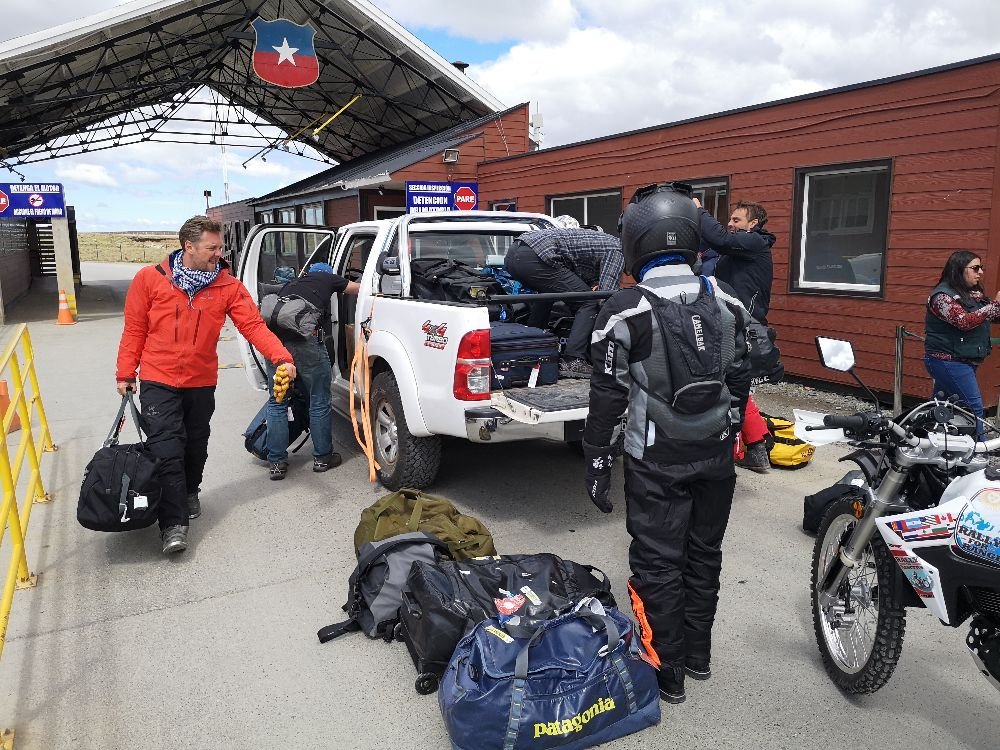 At the border going into Chile. Border crossings were tedious. They made us run all of our gear through the scanner but when we all work together, it doesn't take long. 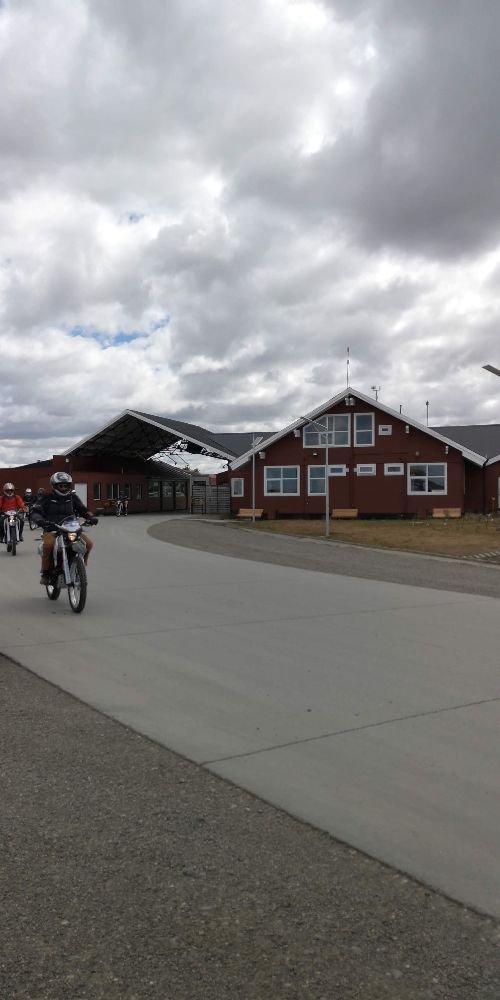 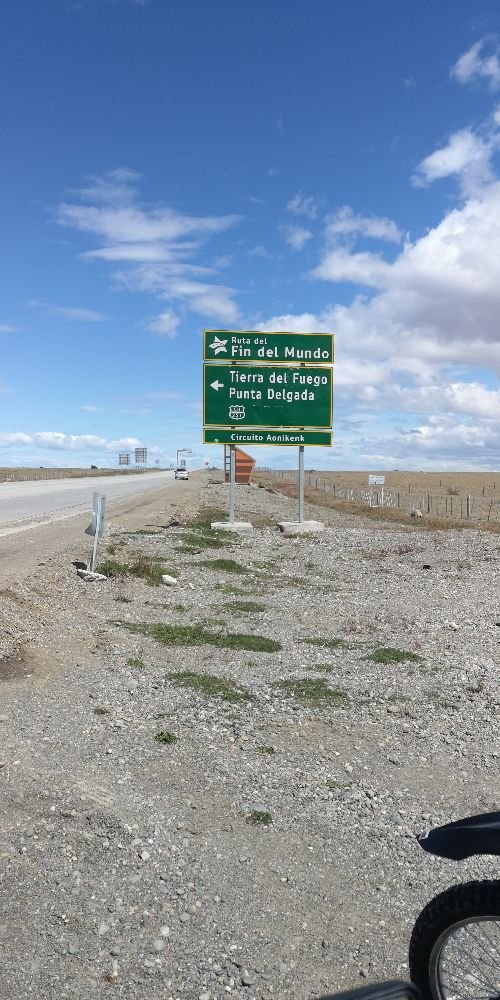 The junction to the ferry and "Fin del Mundo" End of the Earth. 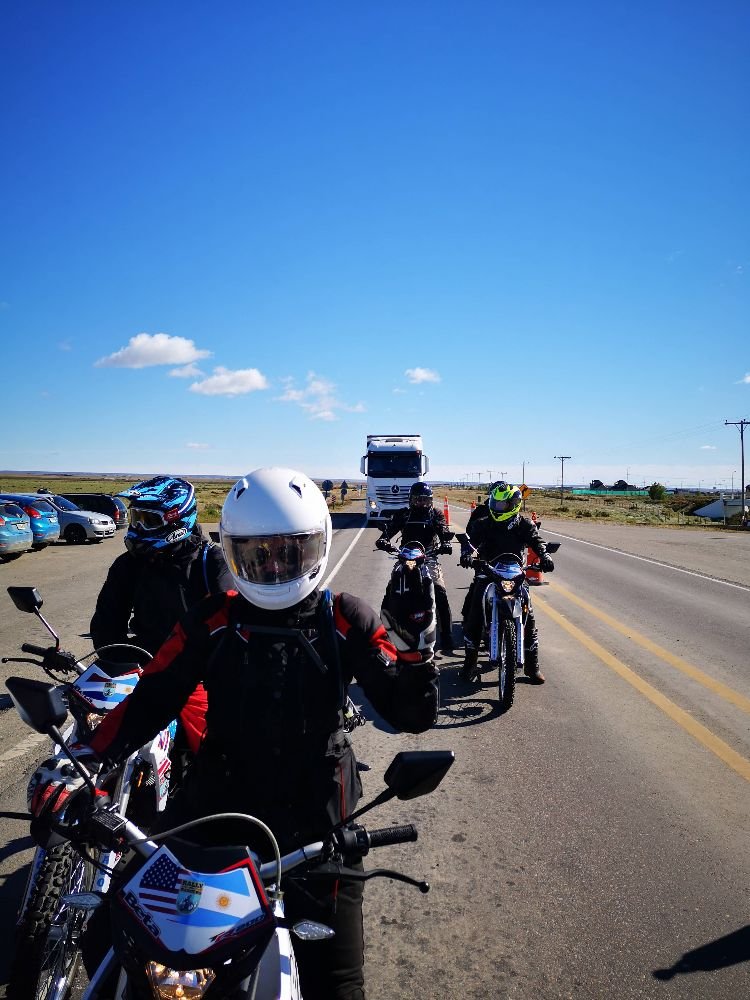 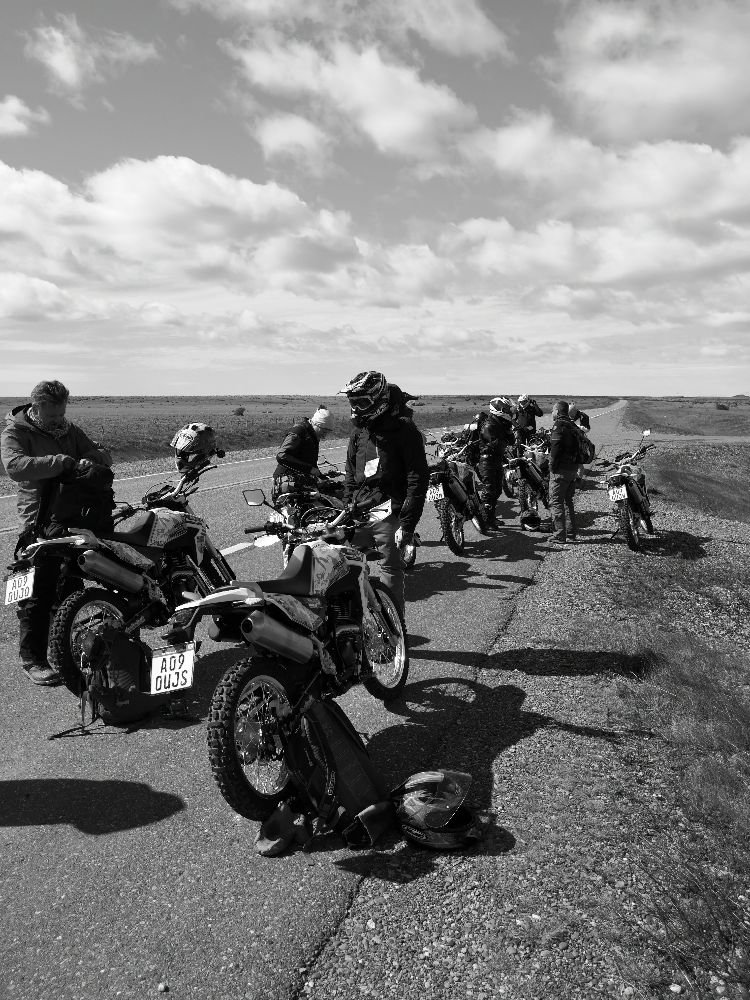 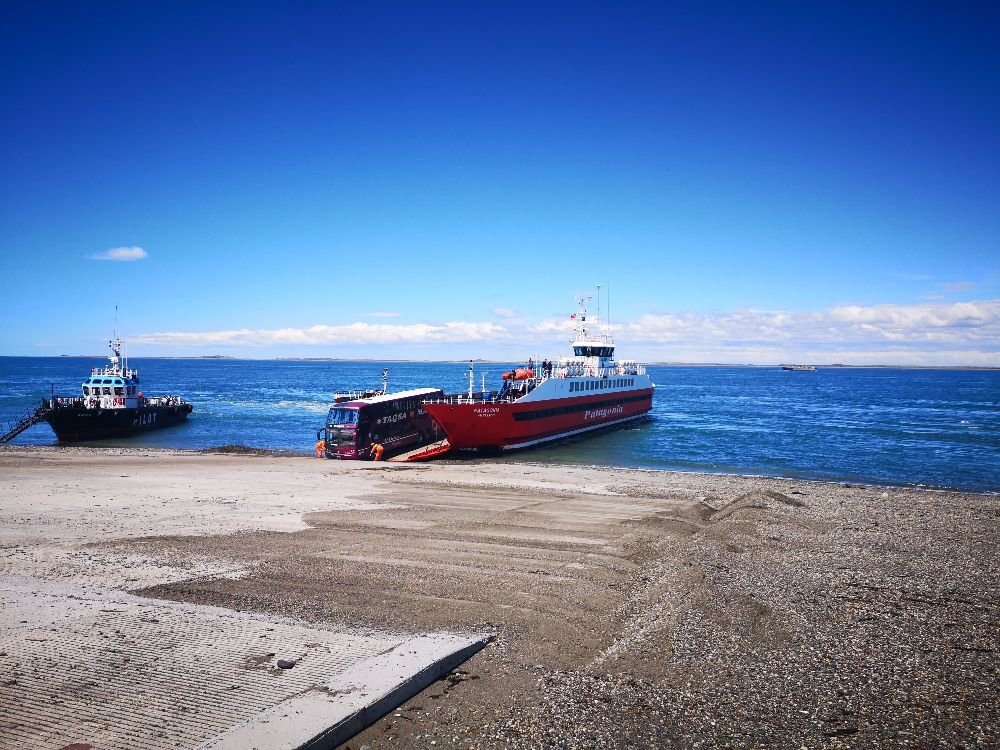 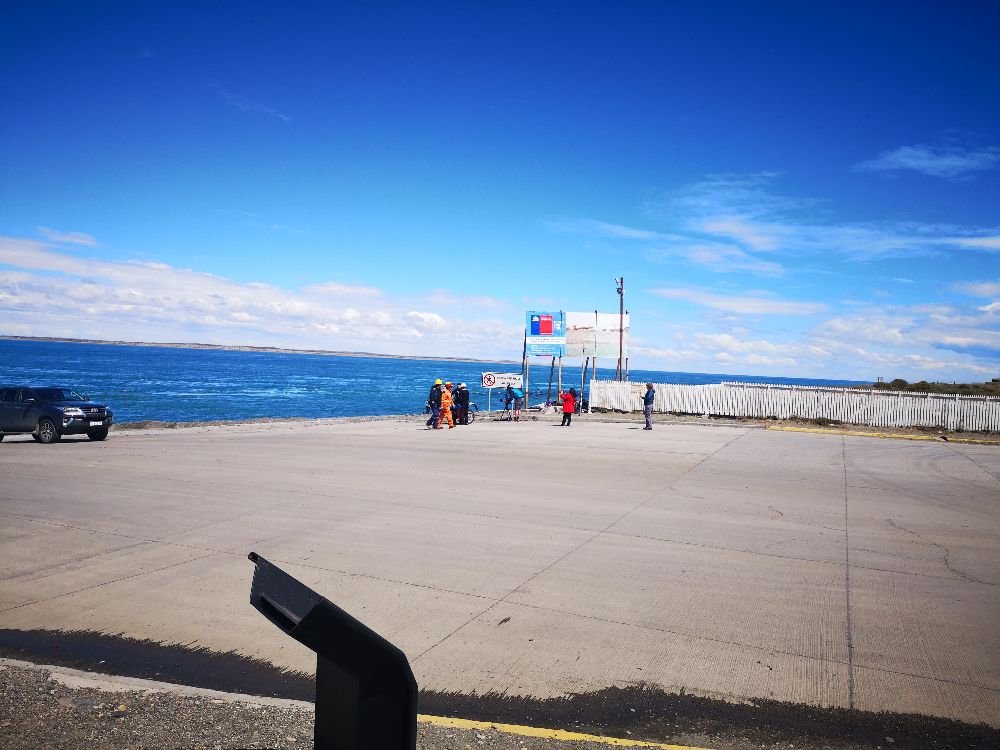 At the ferry landing. I so wanted to tear off down the beach on the bike. 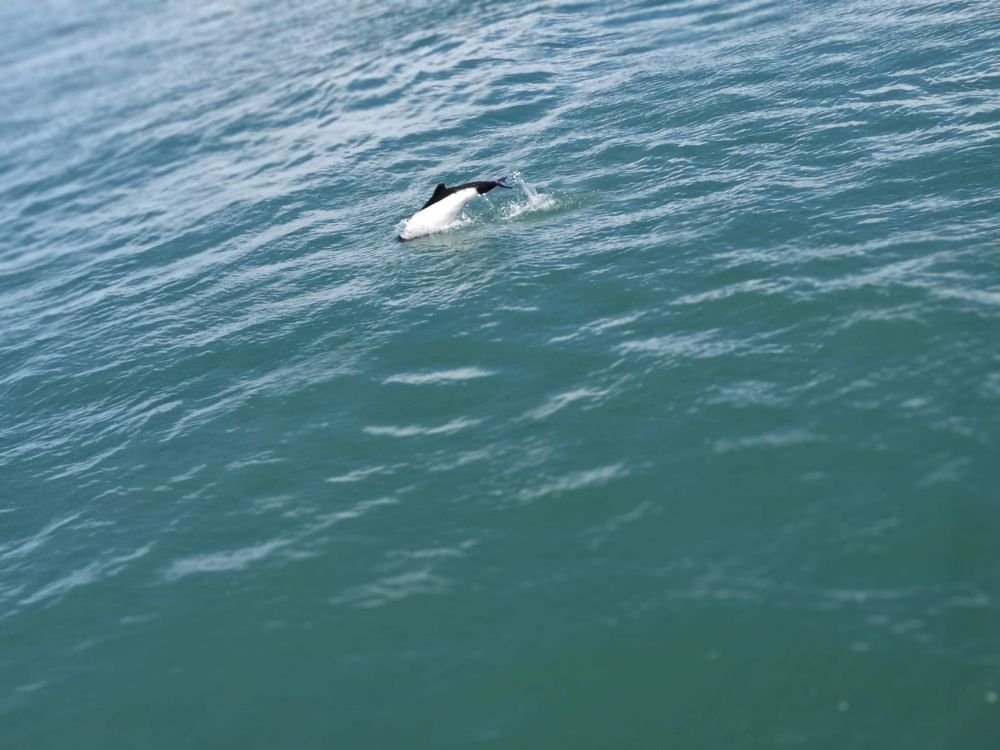 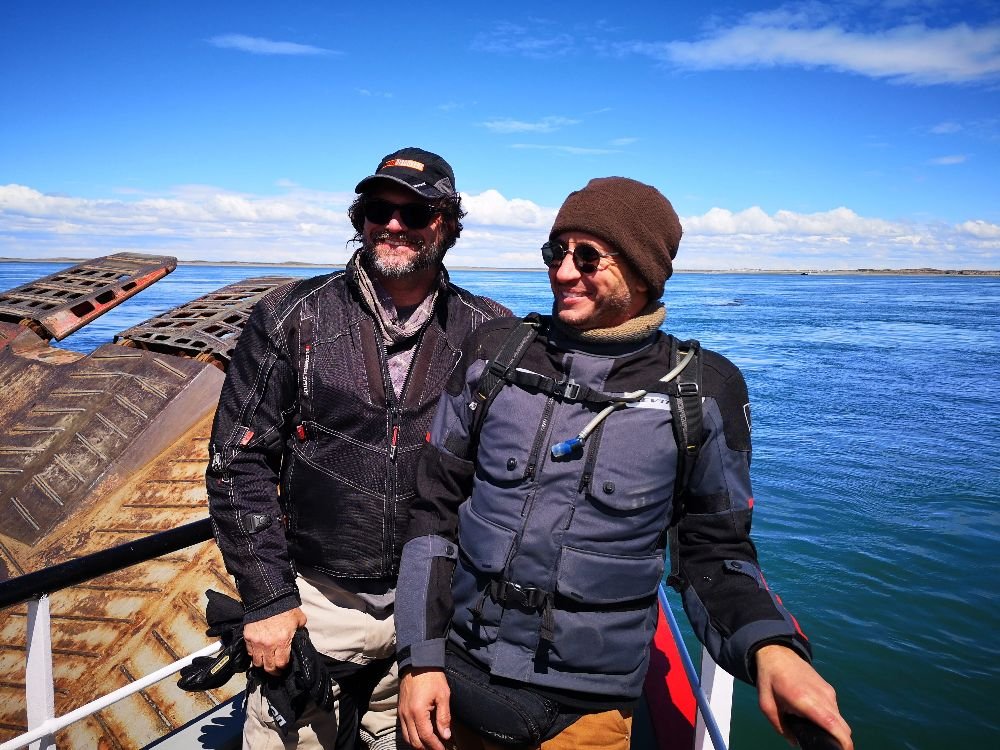 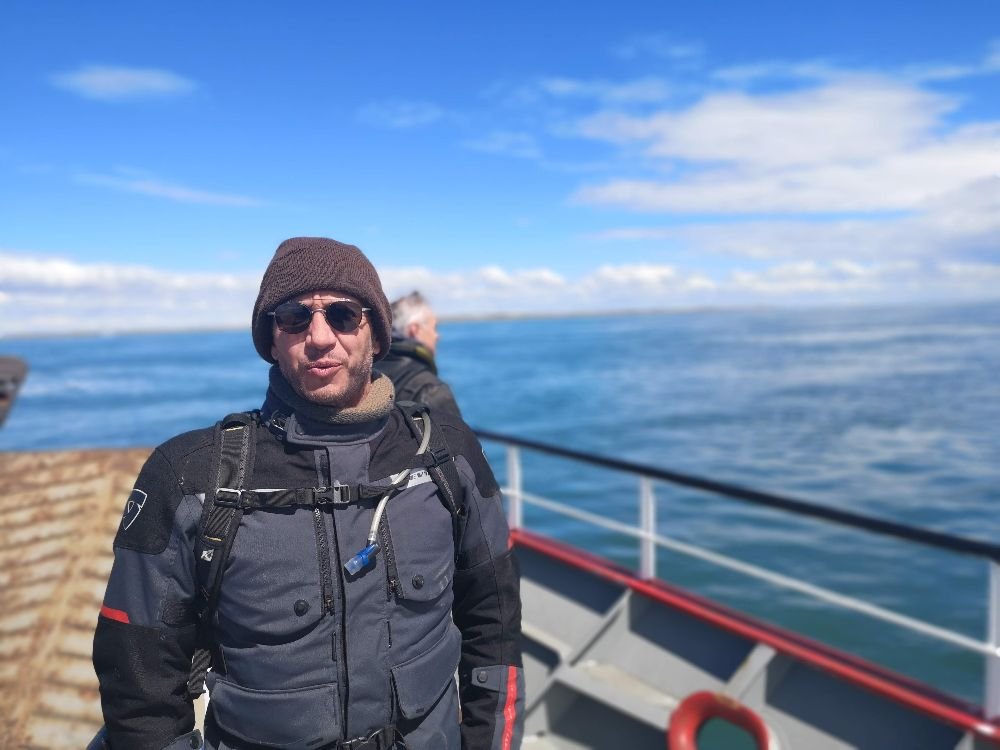 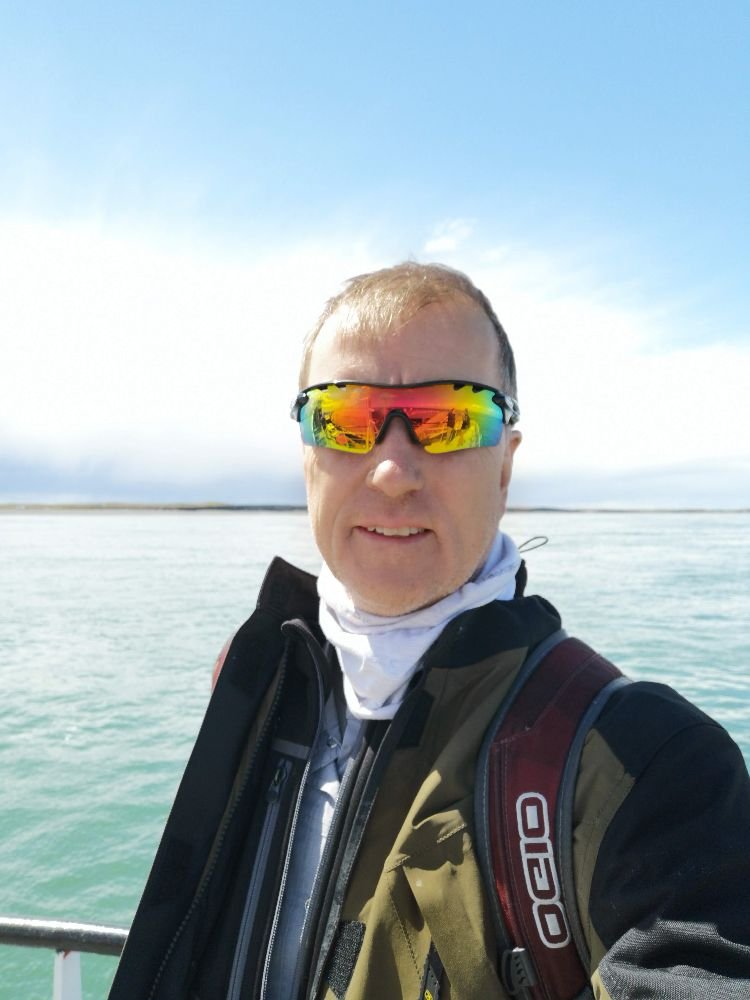 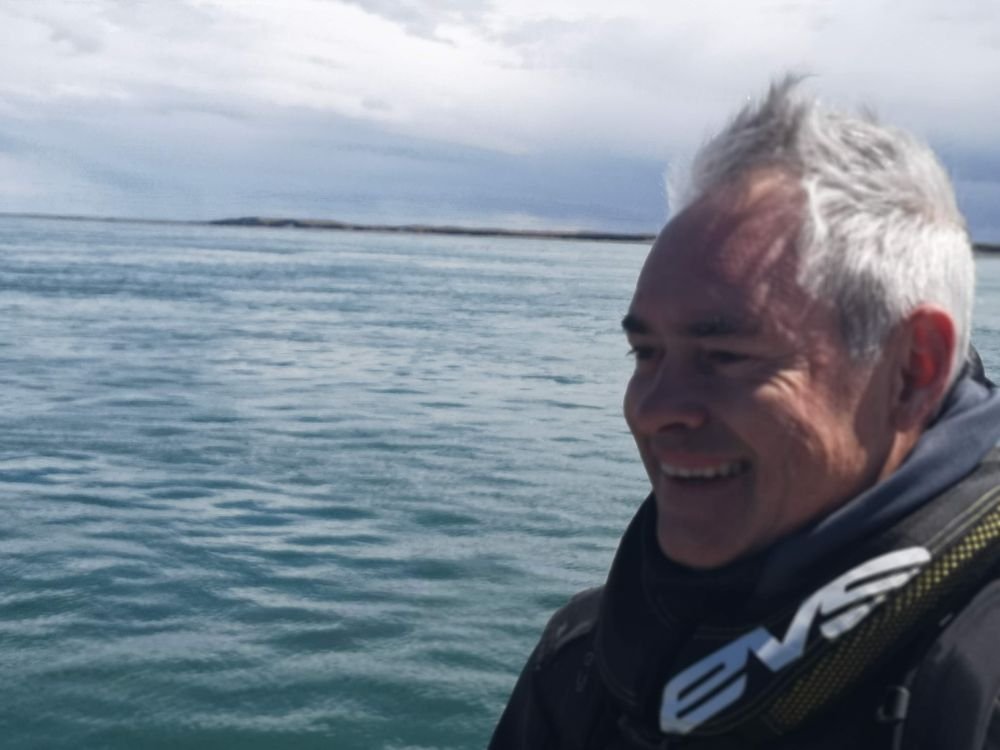 Crossing the Straight of Magellan was a fun ferry crossing. I saw a Penguin and several dolphins not to mention the numerous birds. 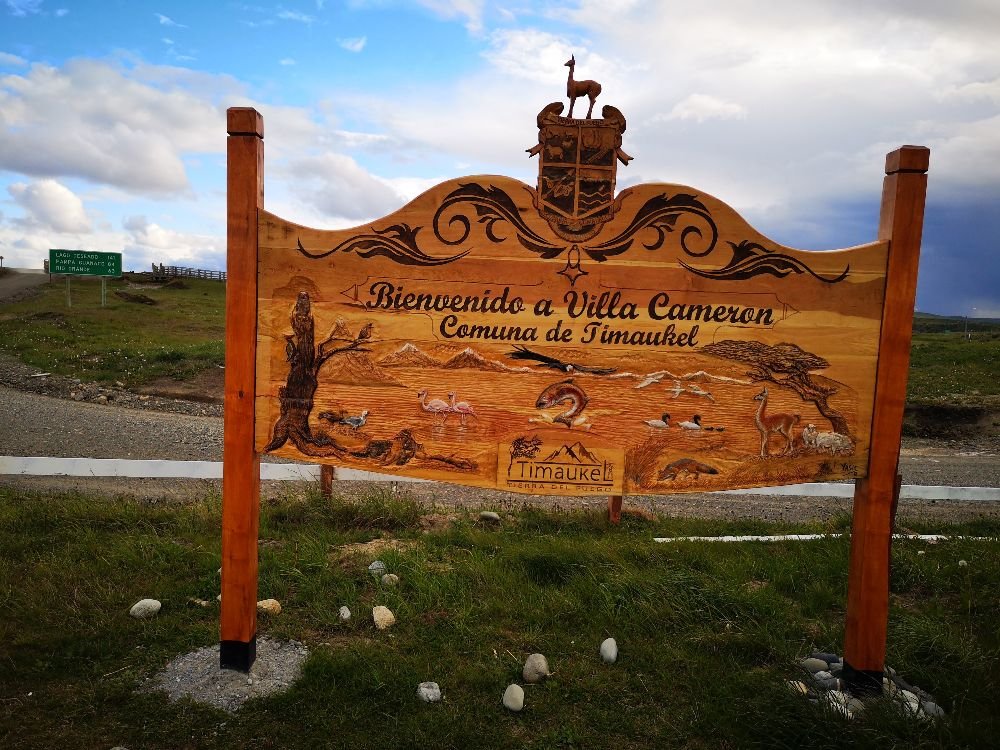 This was a place we stopped for a rest. It was on a dirt road that we took that followed along the coastline. 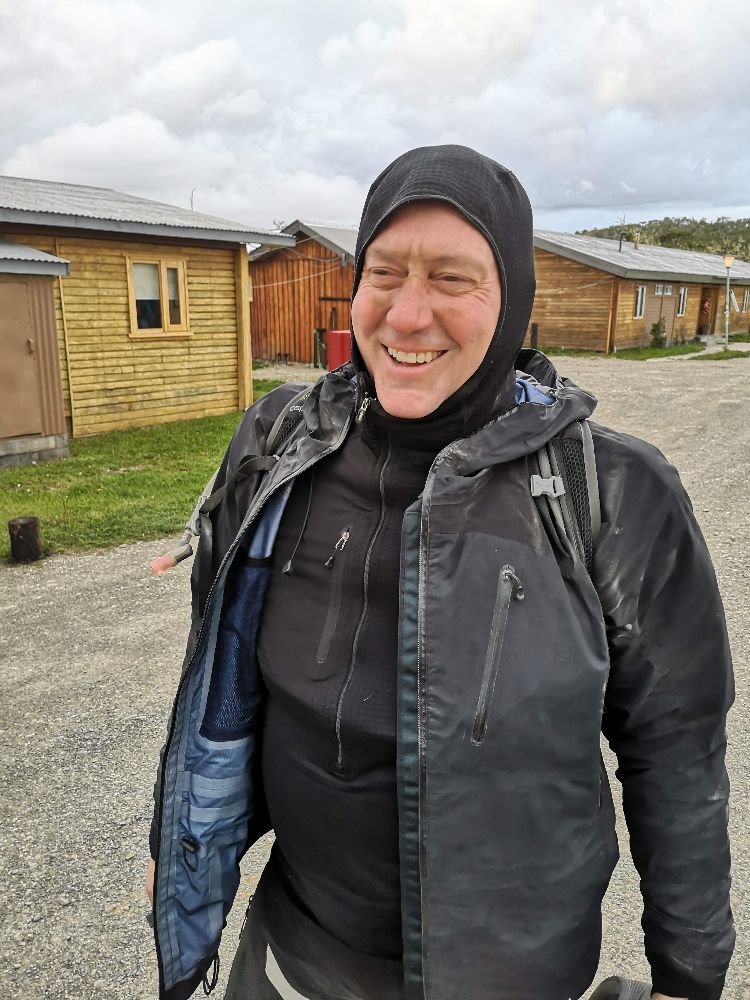 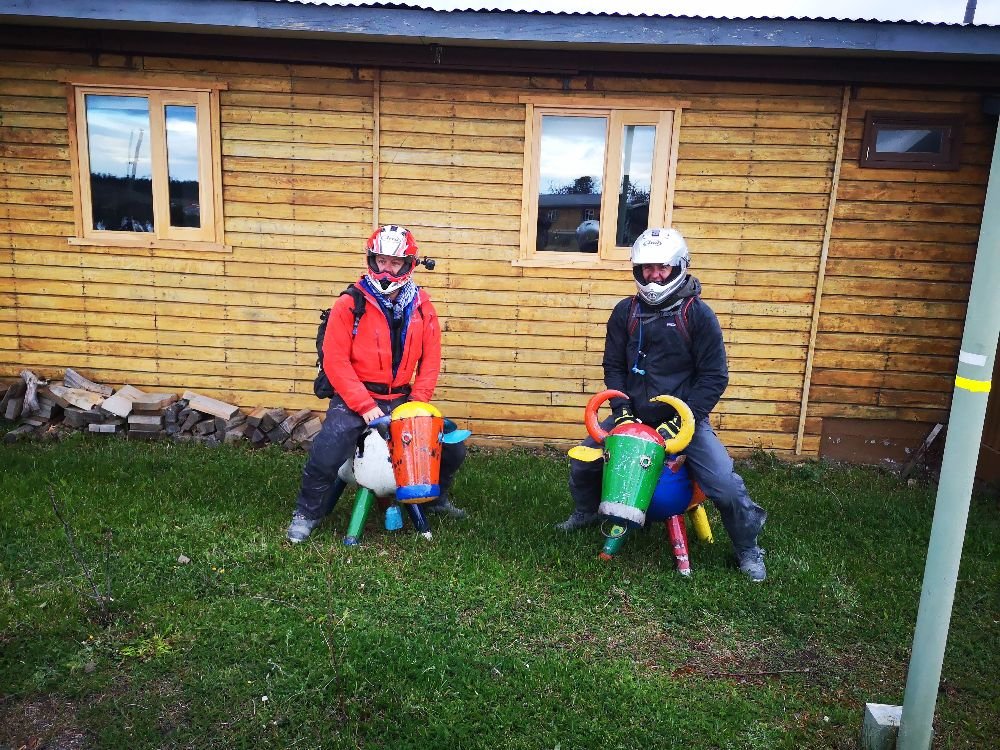 Russfin where we stayed for the night. I really enjoyed this stop but our time there was like a blink of the eye. We arrived late and took off early.

Russfin was where I dropped my bike for the first and only time. Chuck and I went exploring and we followed some animal trails off-road. From a dead stop, I tipped over but it still counts as dropping the bike.

This is a photo album from the first day of riding. We went from Rio Gallagos in Argentina to a little lumber village on Tierra del Fuego. It was a very long day and the people, and places are awesome. i will fill in more another day.