Honda C100 - Where it began for the Cox family

In the spring of 1969. I was 13 my sister Cathy 11, brother Jimmy 10 and the youngest brothers Pat and Mike were 6 and 4 respectively. We were all gathered at the Saturn Avenue playground for perhaps the most exciting moment in our young lives. The excitement level roughly proportionate to Christmas morning times 10! Piss was running down our legs. We were that excited. Dad had just paid $50.00 for a used 1963 Honda C100 Super Cub. We watched transfixed as Dad plucked it from the trunk of his 1961 Olds Rocket 88 and fired it up. The sound of that 50 cc four stroke power horse coming to life was to become our new favorite sound. 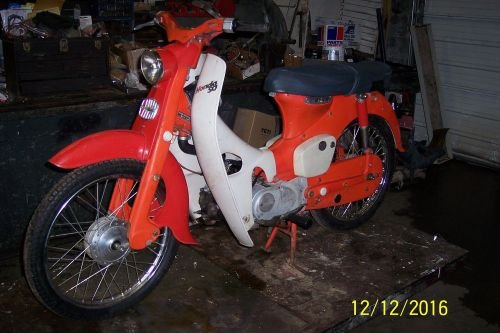 This is a pretty good example of what that C100 looked like. This picture and the one at the top were borrowed from 2040-motos.com. If you are looking to purchase one of these gems, click that link!

This particular bike found its way to our home town of Atikokan in a rather unusual way. At that time Atikokan was a young and booming iron ore mining town. One of the new local businesses was a small Pepsi bottling plant which was managed by a Mr. Hallick. Pepsi had a promotional prize giveaway in 1963 that invited drinkers of their product to look beneath bottle caps to win prizes. Mr. Hallick's son Howie worked at the plant after school and on weekends sweeping up and doing odd chores. Howie soon discovered something fantastic. He had access to thousands of new bottle caps arriving at the plant in advance of product deployment. With a little patience and some cleverness, Howie found a winner. He made the front page of the local paper. The photograph depicted Howie sitting on the new Honda C100 Super Cub smiling from ear to ear. He was the envy of every kid in town. 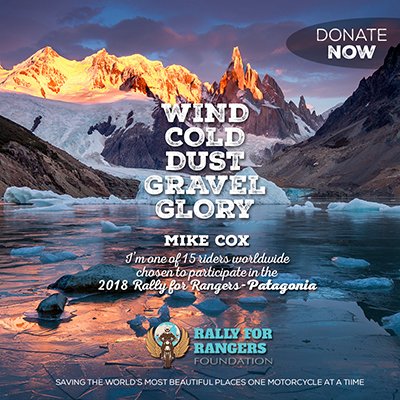 But six years later and despite Howie having wrung many hours of fun from the bike, it still had plenty to give. Dad decided he should try the bike first so that he could acquaint us with its operation based upon rider experience. Limited though it was. Our Dad was named Tom but his friends nick named him "Boomer" which better suited his 6 foot five inch, three hundred pound frame. Dad sat on that little Honda and we thought it would surly collapse beneath him. He placed it in first gear and away he went across the field.

Being the oldest and having had the opportunity to threaten my siblings whilst dad was out orienting himself, I was next to ride. Dad showed us all the workings and set me free with it. It was soon in top gear and I was in heaven. Dad hollered at me to bring it back so the other kids could ride. Jimmy went next and did the same routine as me. Now Cathy wanted to ride it. Both Jimmy and I thought that this was a bad idea. But Dad said to let her go too. The automatic clutch allowed the bike to idle in gear and it was in second of the 3 gears as she set off. Cathy did a nice tight circle, then a bigger one and then an even bigger one. She had it pinned wide open and was yelling something but the engine was over revving so Jimmy and I hollered at her to shift. We mimed with our leg to hit the shifter. She got the message and did just that.

Cathy entered immediately into what for us was a humiliatingly impressive high speed sweeping turn. She was showing us up big time! But this time when she passed Cathy was screaming "how do you stop it" not "how you shift it." We had miscommunicated. She was wanting the location of the brakes not the shifter. Adding to the problem was the fact that somehow she did not realize that the throttle was on the handlebar and that she was holding it pinned. The next and final iteration involved Cathy in flat tracker mode coming towards us at some velocity. Her bright blue eyes were dialed up to massive and in them we could see abject terror. She was screaming at the top of her lungs. Finally we were able to convey to her the words "let go". Unfortunately yet again communication turned out to be less than optimal. Cathy threw up both of her hands relinquishing control to the universe at large. The throttle backed off as it was designed to do and the bike began decelerating. However, in a world where every action has an opposite and equal reaction, the Honda being guided now only by the laws of the universe, entered into an unstable high speed wobble. Cathy and the bike piled into the steel bicycle stands next to the school and everything became very still for a moment.

In shock and horror Jimmy and I sprinted to the crash site and pulled the Honda off her. It was a piece of rare luck, a miracle in fact that Cathy had landed between the Honda and the steel bicycle rack thereby minimizing damage to the sacred Honda. By the time Dad arrived at the scene and began unwinding Cathy from the bicycle rack Jimmy and I were off riding. The biggest bonus was that we no longer had to share the bike with Cathy since for some reason she didn't enjoy it. Pity.

For the next few years that little Honda entertained us during the summer months at our family cabin on Crystal Lake. Surrounded by logging roads with access to lakes and gravel pits we ran that thing ragged. There is a picture of Jimmy and David Morrison with a 30 pound pike draped across the seat of that bike. Our Dad loved to tell the story of that huge fish having its head and tail dragging in the dirt riding on the seat between them. Dad paid to have it mounted and it hung in the bedroom we shared at home. I broke the jaw on the mounted fish years later by putting a Metzler knobby in its mouth. Jimmy is still pissed about that. 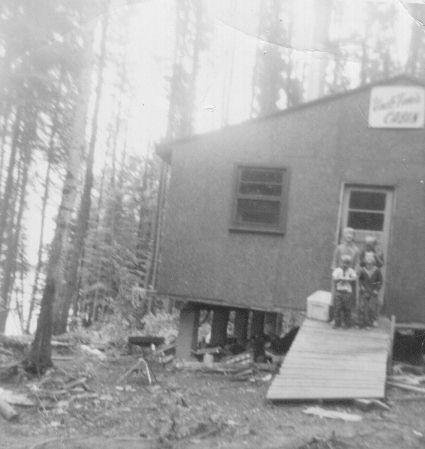 This picture taken just a few years after the cabin was built and a year or two before the C100 made it's way into our lives.

Dad overhauled that bike every winter and taught all of us to be mechanically competent. That bike was handed down to Pat and Mike as we older boys upgraded to bigger and better rides. It was so clapped out by hundreds of hours of use that Dad decide to retire it and sprung for a used Suzuki 90 for the boys. They rode that for hundreds of hours too. 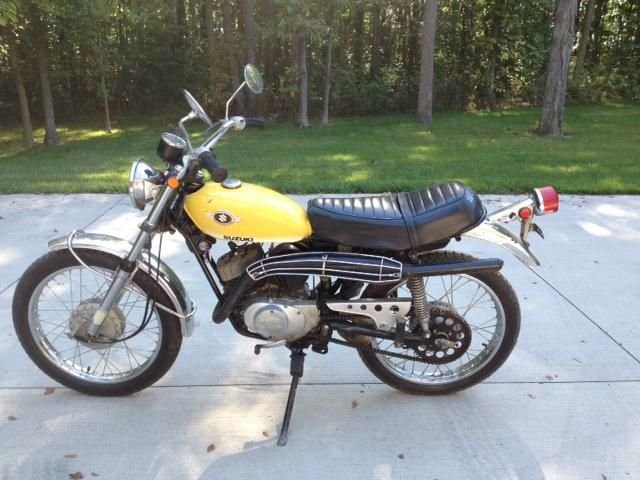 Another picture borrowed from 2040-motos.com. The second bike that was beaten to death by the Cox brothers. 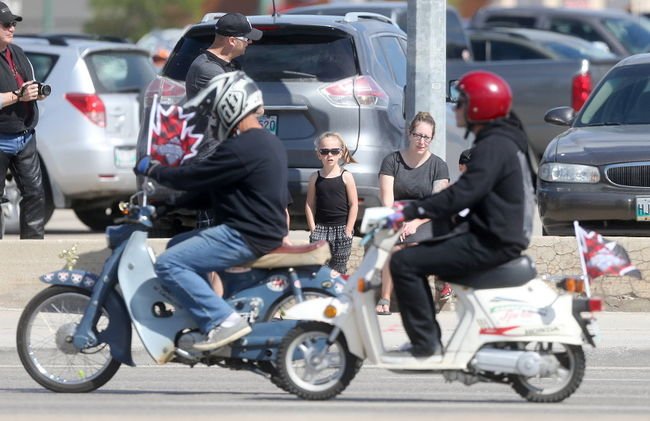 Bonus Picture borrowed from Winnipeg Sun. This photo from May 27th is Motocross legend Kim Houde riding a C100 in the Ride for Dad Charity. 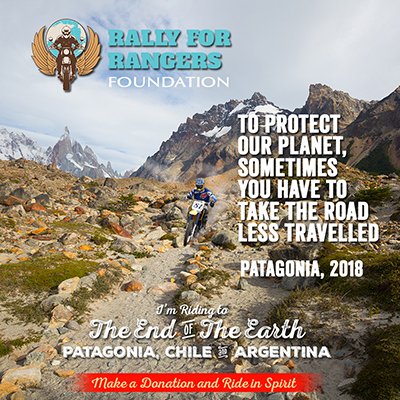 I hope you enjoyed this story. Please consider donating to Rally for Rangers. Any donation would help the cause.

I have an offer for you! Write a story and I will post it here on VintageMoto.ca. Your story will be used to help generate donations for Rally for Rangers. I will also pay you 25% of revenues generated from your story.