The Carburetor was badly plugged.

Not suprising, the carburetor of the old bike was plugged solid but what is surprising is that the guy that owned the bike was able to get it started at all. When I found the bike on kijiji, there was a video that showed the bike running, not moving, just running. I didn't bother to start it when I bought it, I just took it home. A few days later I decided to see if it would fire up for me so I turned on the gas and a stinking thick blue stale stream of fuel drained onto the ground.

I didn't bother to kick it over, I took the carb off a few days later to clean it up. It was in very bad shape, the floats were stuck on their sliders, the needle valve was seized, the float bowl was full of varnish and the passage ways were all plugged solid. I spent an hour cleaning and scraping, I even used a drill to auger out the enrichener circuit. Knowing it was going to need more time and attention than I had that day I decided to put it back on and fire it up.

The air filter was degraded to the point of disintegration so I just peeled off the outer layer and put it in place. The bike started second or third kick and sounded really good, I even managed to take it for a little rip. The pilot circuit in the carburetor was still plugged so it had a bad bog off idle but would run strong on the top end. I took it down the street and did a little wheelie, the power is fantastic but it sure is loud. 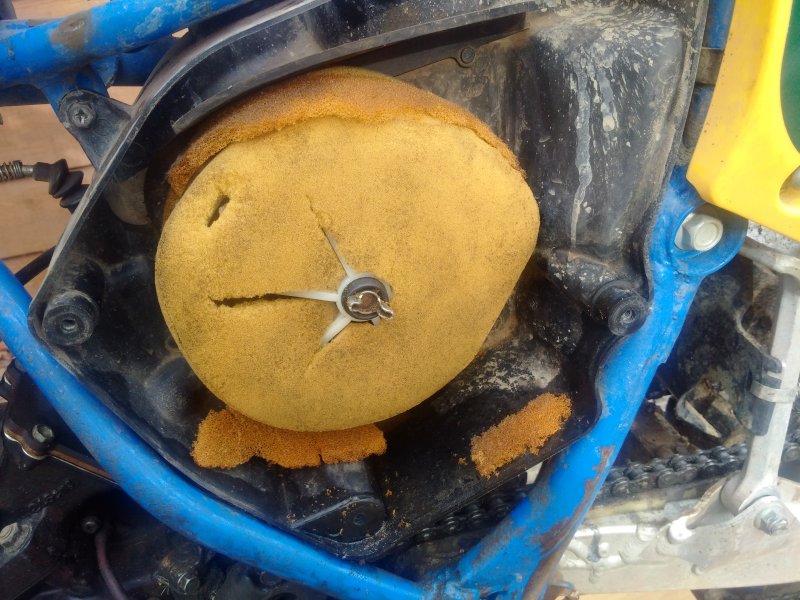 Fortunately I only ran it for a couple minutes, this is what became of the air filter after only a short time. It was sure cool to hear it run though and feel that horsepower.

As luck would have it, I ran into Mark Baskin at the feed store

A few days later I happened to bump into Mark Baskin at the feed store. I worked for him in the late 1980s as a Marine Mechanic and I was telling him about my new-old bike and how plugged up the carburetor was. I asked him if I could come down to the marina some time and use his parts cleaner and he mentioned his current mechanic has a sonic parts washer.

A couple days later Mark called me and mentioned George had brought in his sonic parts washer and I should bring my RM carburetor and take advantage. 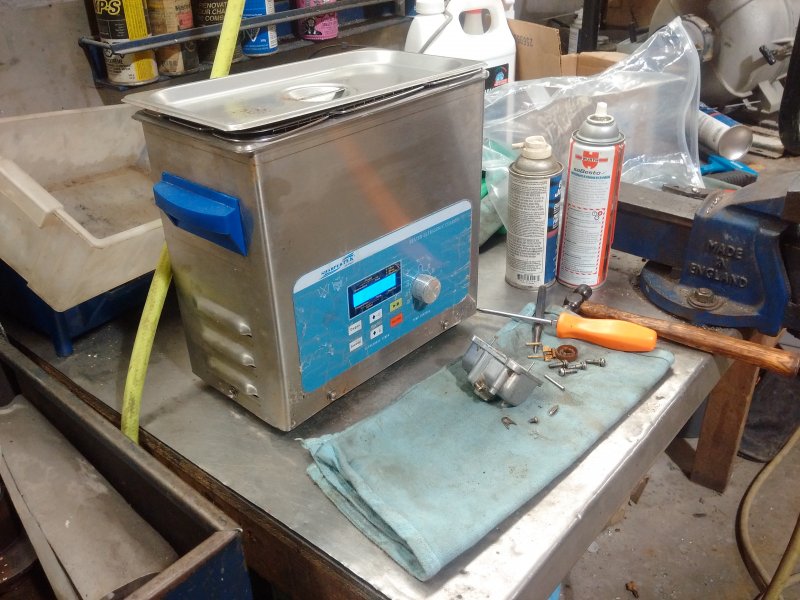 inside this sonic parts cleaner sits the curburetor of my old bike. We put it in for about 15 minutes and then blew it out. The pilot circuit was still plugged so it went in for another 15 minutes which did the trick 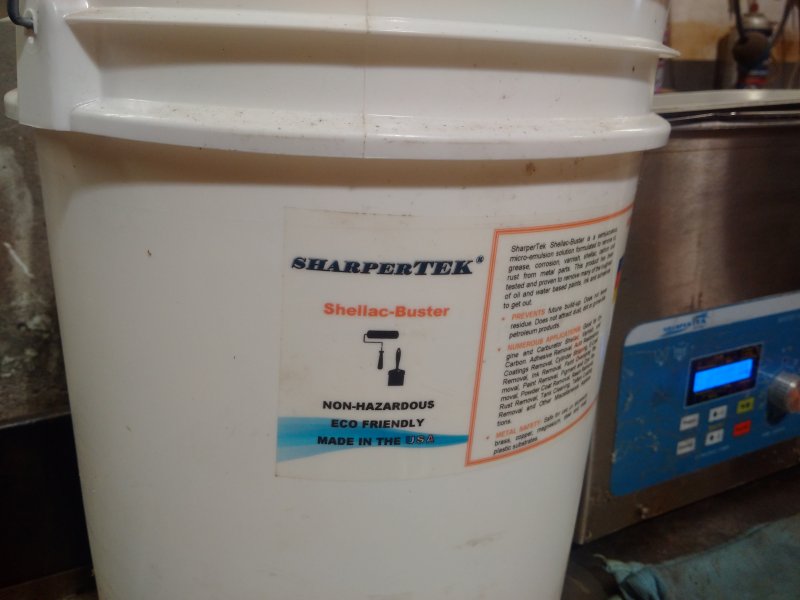 This is the cleaning fluid, aparently a 20-litre pail is worth $200. It is a non corrosive product so the carburetor was not damaged in any way. 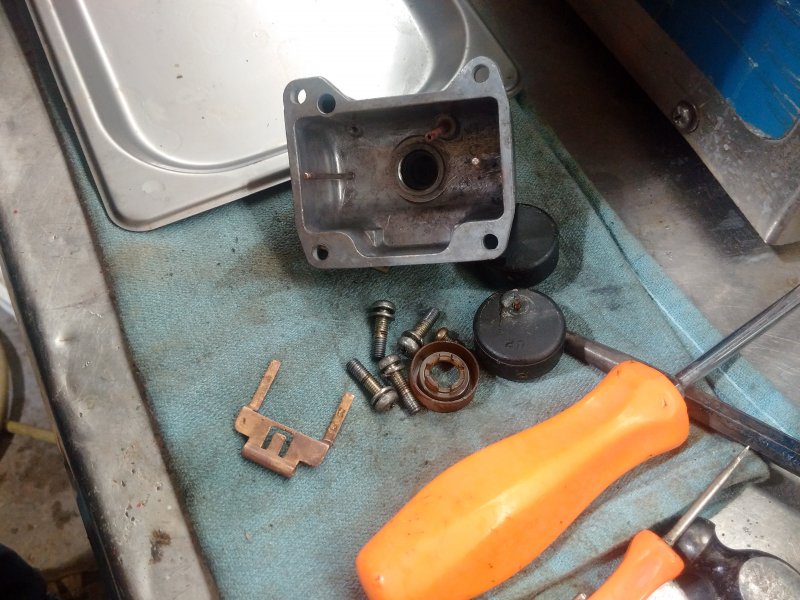 After some time in the cleaner it started to look good. 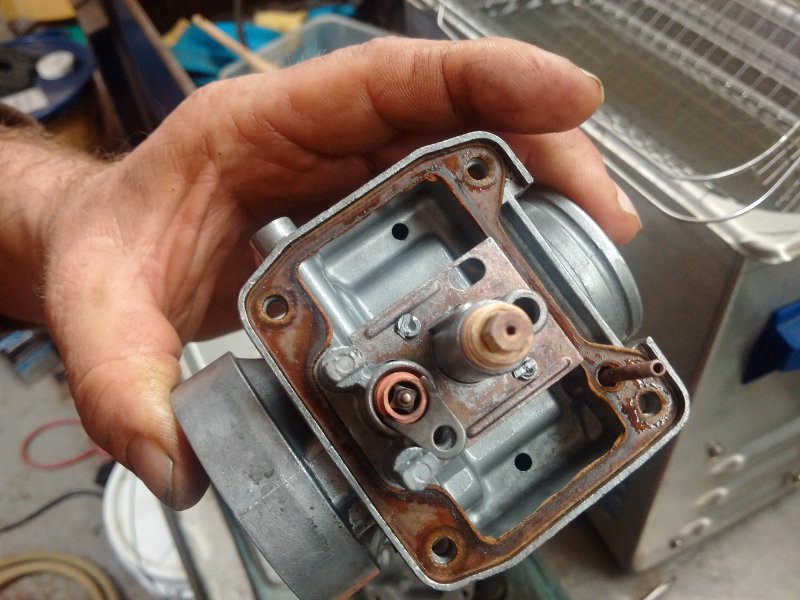 The results were astounding. Even the seized plunger on the needle valve was freed up.

Some before shots would have been nice to have, but maybe next time. I was really happy to get this problem resolved so soon, I am confident that I won't have any carburetor issues next spring. I am also pretty sure this bike will run strong.

A boring story, but a story none the less...