Raising the Bar with Ian Coristine

It seems like a lifetime ago, and I suppose it was. I started working for Ed Huck Marine in 1990, one year after their centennial celebration. Ed Huck Marine is a marina located in Rockport Ontario in the heart of the Thousand Islands and I was hired on as their SeaDoo mechanic. I enjoyed working there despite the poor wages and seasonal layoffs that Marine Mechanics endured back then. One day in the early fall of one of those years, a small squadron of ultralight aircraft stopped at the gas dock for fuel. That day was memorable for me because its not every day a bunch of airplanes stop by for gas. But this day was also the day that changed the life of my friend Ian Coristine.

Ian was a stranger to me that day as he was the pilot of one of those planes. I went out to the dock and talked with them for couple minutes and soon after, they taxied toward the channel and flew away. I barely gave it another thought until a few years later when I had changed careers and was now self-employed in the Internet business. I had been developing websites for a few years by this point and Ed Huck Marine was my first client. My brothers and I also became Internet Service Providers in our home town of Atikokan and my portfolio of skills grew to include many different Internet technologies. It was around this time that I got a call from Ian Coristine.

Ian needed Internet service on his island and Scott MacCrimmon from Ed Huck Marine gave him my name. This was prior to the days when fixed wireless Internet was deployed to reach the hard-to-reach. I purchased a Hughes Satellite dish and a subscription and headed to Brockville to meet up with Ian to do the install. Ian picked me up on the shore with his little 14' boat, we loaded it up and made the short trip to what he liked to call paradise. 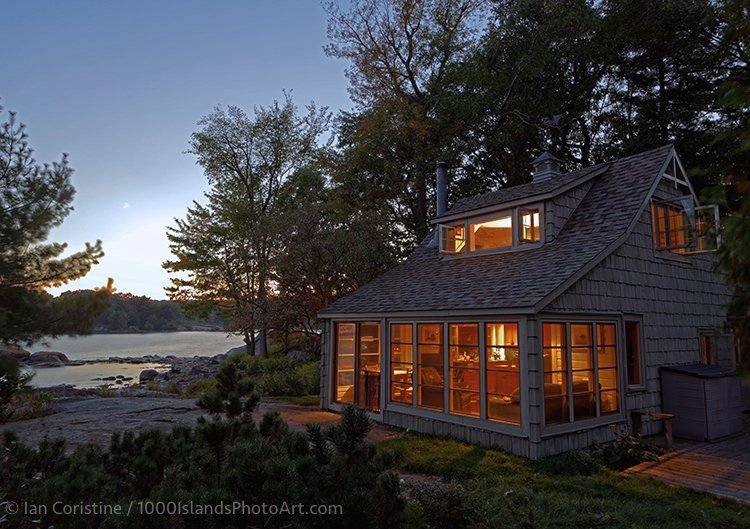 Ian Coristine's cottage on Raleigh Island near Brockville Ontario in the Thousand Islands.

Ian and I spent the day together struggling to get that primitive two-way satellite dish online. We drilled some holes into the bedrock beside the cottage giving it a rock-solid foundation and proceeded to be baffled by the lack of signal. In Canada, the Hughes dishes are pointed low on the horizon and we had a perfect unobstructed view of the westward sky above the beautiful St. Lawrence River. In an act of desperation, Ian climbed up on a tree with a handsaw and pruned some branches that did not appear to be in our line-of-sight and low and behold, the signal lights finally lit up. It was a frustrating day at least from a technology perspective, but it was a great day in every other measurable way.

Ian told me of his love affair with the Thousand Islands, about how he had discovered it by chance when he and some friends were flying over the area in their ultralight aircraft one autumn day several years before. It was a day that changed his life. To him, the area was a magical place in every way; breathtaking scenery, clear aqua-green water, castles, mansions, cottages, trees, beaches, cliffs and all right near his own backyard of Hudson Quebec. He decided that very day that this was where he was going to spend the rest of his life. Ian bought the perfect island, one that had a protected harbour to keep the plane. It was a small and modest cottage but the location was perfect. He fixed the place up, and spent every possible minute there. He'd get up early in the morning and fly his little plane low-and-slow with his camera in hand taking pictures from a perspective that had never before been seen.

Ian built a business out of his passion for the Thousand Islands. He wrote a series of photography books that were of astounding quality. He brought his first book to a publishing house and was presented with the cruel reality of the publishing industry, that his masterpiece would never provide him with a living so he took matters into his own hands. Ian ran the numbers and took a huge risk. He published the book at an unheard of volume in order to get the price down and then he drove around the region on both sides of the Canadian U.S. border with his boxes of books and sold them himself. Publishers had to come to him if they wanted to sell his books. And it worked. 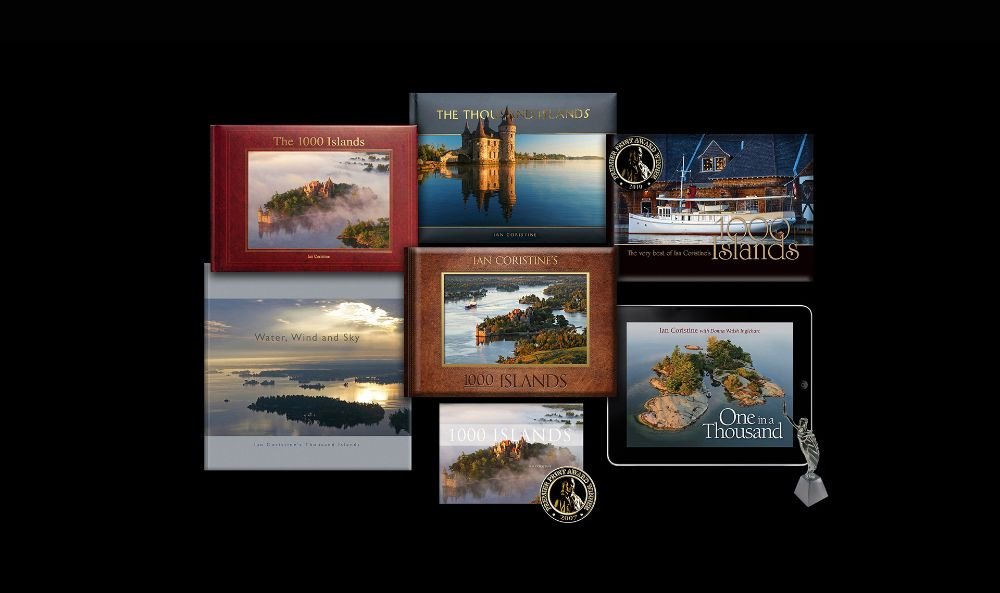 The books Ian Coristine wrote, published, sold and delivered. These books are all over the world now. A few are still available at his website.

With Internet access at his island, he was able to take orders for prints of his photos. He would print them from the comfort of his tiny cottage and bring them to town to ship them out. Around the time that I met him, I had been setting up web cameras for different customers and he decided that was just what his little island needed so I was back out there working on more technology, sharing stories and gaining some life lessons.

This video was made by capturing a picture a day from the web camera we set up. Web cameras today are commonplace, but at the time, this was cutting edge.

From those initial visits, Ian and I became friends and he became my biggest promoter. Eventually I took over editing his website which led to building a new website and eventually a good portion of my business came from his contacts. Together with the help of Susie Smith, we built an amazing magazine called Thousand Islands Life. I visited his island several times over the years and would bring my family where he and his big red dog Molly were always gracious hosts. We worked on many projects, and together we made magic happen. He was the artist, I was the tool-chest. He would tell me what he wanted and I would make it happen. I would say "that can't be done" and he'd say "sure it can" and eventually we'd find a way to realize his vision. We'd spend hours on the phone working, taxing my patience to the max. I would occasionally hang up the phone and fall into a raging rant. As frustrated as I would get, I always enjoyed the ride because we were, as he'd like to say, "raising the bar".

As the years went by, both of our businesses changed. A few years ago when I was coping with serious burn-out, it came time to rebuild Ian's website again. The platform I used to make it was at a dead end so I had to figure out a way to move this huge photo portfolio into a new platform. This time around, Ian was taking a back seat to this redesign and leaving it to his wife Lyne and I to complete. The project got away from us to some extent and ate up way more time than either of us anticipated. Frustrations from both sides grew. Ian had learned how to deal with my skillset and occasional volatility. I had relied on Ian to direct our projects where Lyne expected me to have more answers than I did. In the end, I had spent way more time on the project than we had budgeted for. Ian got involved at the end and put his unwavering critical eye to the task, guiding it to completion. Now I had to figure out what to charge. The site was beautiful, but late and over budget. This is where motorcycles come into the picture.

Ian was a racecar driver in his younger years and I was a motocross racer in mine. When we first met, I had a recently renewed passion for the sport. This love of motor racing gave us some added common ground. I would regale him with tales of dirt bikes and likewise him with racecars. While I was just a rider in the local scene, he was a racer on the national scene and his stories were fascinating. When I turned forty, I sold my Yamaha motorcycle and bought a Yamaha guitar and put my creative energy to the safer pursuit of music. By the time I was fifty, I was back into motocross and enduro riding. I found myself on Kijiji looking at bikes on a daily basis and I spied a 2013 Suzuki RM-Z 250 for sale in Brockville for $3,500. It looked like a great deal to me so I monitored it for a week or so. After two weeks, the bike was still for sale so I made an offer. The owner would not budge on his price, which I respected as it told me he was confident in what he had. I drove down to Brockville and the bike was exactly what it was advertised to be so I bought it. I loaded it on the trailer and since I was in the neighbourhood, went to visit Ian and Lyne.

Ian was getting into drone photography and was showing me his recent work. I showed him the new bike and as always, there was plenty of enthusiasm. We had a nice visit and with the stress of launching the website recently behind us, this visit felt a bit like burying the hatchet. It was time to talk money. I knew I couldn't ask for what I actually put into it, it just was not in his budget. The book business had faded some and the website was not worth spending a large amount of money on. Going over budget happens, this time I had to accept a great deal of the responsibility, I was the one that insisted we move the site to a new platform. So we talked about it for a few minutes and I said, "pay me what its worth to you and I will be happy". He was my rainmaker for years, I would be happy with whatever he chose. He pulled out his chequebook and paid for the bike.

Today, February 15, 2020, at 3PM, Ian passed away. He had cancer and it spread through him quickly. I will miss my friend, but I will always draw inspiration from the way he lived his life. The last time we spoke, he told me he was fine with this predicament because he'd done everything he ever wanted to do. No boxes left unchecked. Today at 3PM, my wife and I took our dog for a walk out to the island in front of our house. It was not his island, nor his river, but we stood on that island with him in our hearts and in our minds. Fly low-and-slow my friend, take it all in. 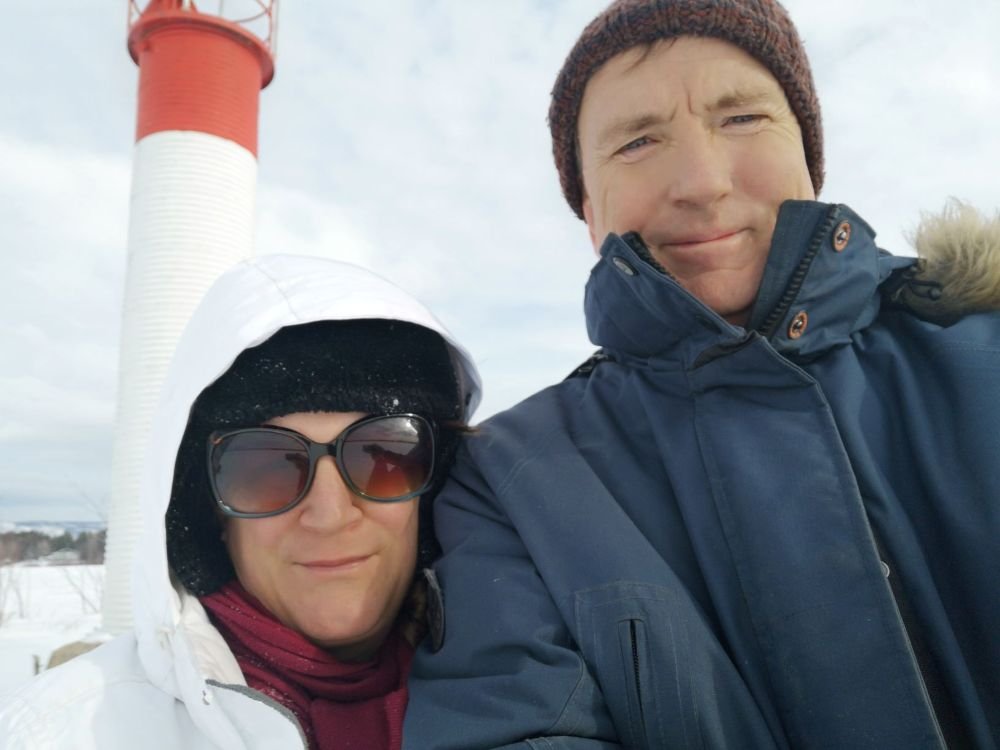 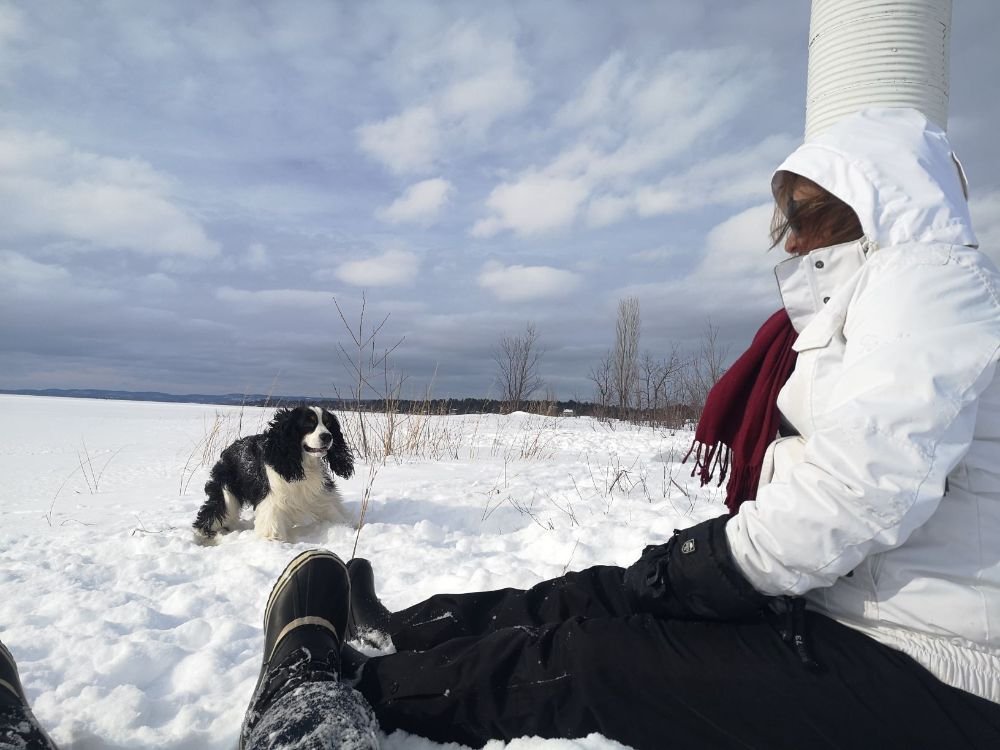